There's really not too much too write about this week in Pop Culture other than a few newsworthy bits. So here's the 411 for the week of February 19, 2021!
"Get outta here"! The trailer for HBO Max's Mortal Kombat, has dropped!
As a fan of the videogame series since its inception during the early 90's, I was curious about how a more adequate adaptation of the games would look, so after watching the trailer. I'm neither optimistic nor pessimistic.  First off, the main protagonist is not affiliated with any of the original characters however Sub Zero, Jax and Scorpion came off impressive.  Glad to see Kung Lao make his live action debut but where's my boy Kabal and why is Liu Kang dressed up as Ryu?
Good to know that Joe Talsim of Warrior, The Raid Redemption and the excellent The Night comes for Us is cast as Sub Zero. Overall, this looks promising despite a silly trailer is practically a self-referential parody with those tropes. "ON APRIL 16" *BRUAAANNN* "EXPERIENCE A NEW AGE" *BRUAAANNN* "OF KOMBAT" And of course, there's the ol Hero's journey with one liners.
Rush to Judgement

So, the provocateur and I'm being nice about this, Rush Limbaugh has shuffled off his mortal coil after a yearlong battle with Lung Cancer and well, I could care less. Truth be told, I'm not above feeling satisfaction that he's gone. And while those self-righteous individuals out there, would call me "inhumane " allow me to give you a brief history lesson:
Rush Limbaugh has used his "popular" tv and radio show as a means of accelerating hatred and bigotry throughout the decades. It is because of his empty rhetoric why, more White Supremacists ran for office under the Republican party i.e., "Neo Conservatism " he was known for making fun if people dying of AIDS, made jokes about Eric Gardner who was choked to death by The NYPD.
Instead of embracing the more credible conservatism of Barry Goldwater, Limbaugh evokes the trash talking Wrestling slash RednecKKK  alarmist doctrine. 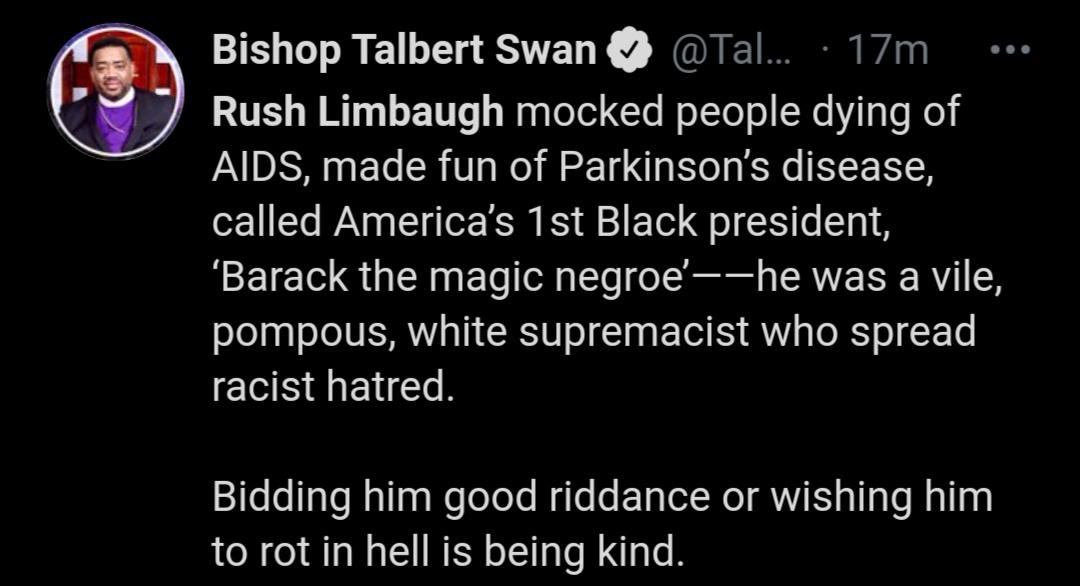 "It’s Obama’s America, is it not? Obama’s America, white kids getting beat up on school buses now. You put your kids on a school bus, you expect safety but in Obama’s America the white kids now get beat up with the black kids cheering, ‘Yay, right on, right on, right on, right on,’ and, of course, everybody says the white kid deserved it, he was born a racist, he’s white.”
Funny because Obama wasn't the Leftie many once envisioned as he signed the "Blue Alert Law" enabling many police officers to harm citizens of color without facing serious repercussions. Rush obviously had a problem with Mr. Obama being the first (half) Black President.
With diatribes such as this, I don't know whether or not Limbaugh subscribed to either Darwinism or Nazism. Probably both! 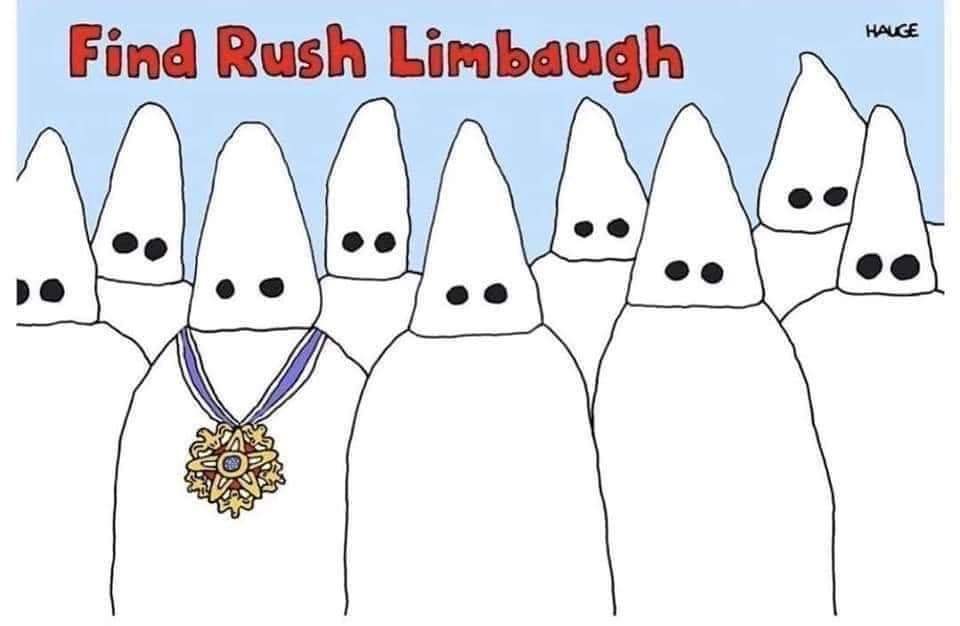 Not too long ago, Rush Limbaugh was awarded the Medal of Freedom since his legacy help put blowhard retards like Donald J Trump into the Whitehouse. So now Mr. Limbaugh, you have achieved your freedom, as in free from a brand-new beginning now that Grandpa Joe is calling the shots, reversing everything Trump had put into place. Oh, the sweet irony! 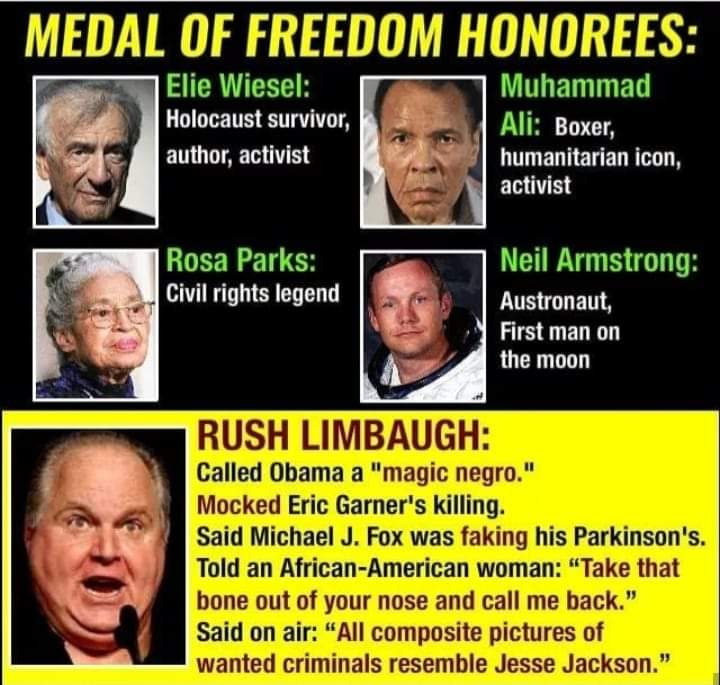 And speaking of ironies, didn't he say about Eric Gardner; "I can breathe, because I follow the law"
Well, my Oxycontin taking Oxymoron, "breathe"!
Limbaugh died during Black History Month. Let that one sink in for a minute.
Marilyn Manson Abuse Allegations are being investigated!
Consequence Culture has struck again! Shock Rocker Marilyn Manson whose real name is Brian Warner is facing allegations of abuse allegations from actress Evan Rachel Wood and four other women. Wood   made a post on Instagram accusing Manson, of "horrifically" abusing her for years and said he began "grooming" her when she was a teenager. Wood was engaged to Manson since they first met when she was 18 and he was 36.
I wouldn't put it past that nutbag Marilyn Manson of abusing women however, Evan Rachel Wood is not stranger from controversy, as she got into a shitstorm last year when labeling Kobe Bryant, a rapist right after he and his daughter Giselle died of a horrific Helicopter crash. Yet praised David Bowie who had sex with two underage girls and worked in a Woody Allen project. Cancel Culture came for her ignorance and why would she stay in a toxic relationship with Manson for many years? 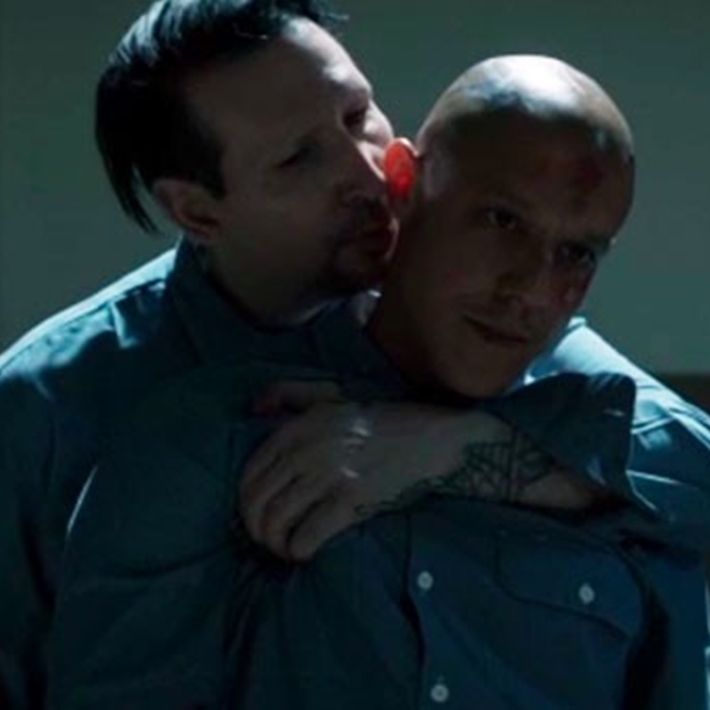 In the meantime, after the allegations have come to light, Manson was dropped from his record label, Loma Vista Recordings who would no longer promote Manson's recent album or work with him on future projects.  But wait, we're not done yet! Manson is catching the smoke when it comes to his acting career, since a segment of the Shudder series Creepshow  set to cast Manson during the upcoming season will not make its way on television.
Manson's recurring role in Starz's American Gods, will also not air the one remaining upcoming episode until Manson's character has been edited out. And finally, his Agency, CAA dropped him.
Well, Manson can always reprise his role as Ron Tully in FX 's Sons of Anarchy spinoff, Mayans. All he has to do is give Creator Kurt Sutter a holla...oh, wait!
Speaking of "Mayans" the series makes its return for a 3rd season this March right around both Zac Snyder's Justice League and Disney's Falcon and the Winter Soldier. As both Bop and I are SOA fans, this is something to look forward to especially after the events from last Season's finale!
Stan the Man, or True Deceiver?
Stan Lee Biography is a scathing tell all of the Comics' legend!
Released this week is True Believer: The Rise and Fall of Stan Lee which gives further insight on Marvel's iconic spokesman, Writer and "Co-creator" of the most innovative Superheroes of American Pop culture.
From his not so humble beginnings, backstage family drama, a torrent of accusations of opportunism, neglect and abuse all under the roof of the "House of Ideas" where Biographer Abraham Riesman gives credible accusations of Lee's unscrupulous methods when he writes, “It’s very possible, maybe even probable, that the characters and plots Stan was famous for all sprang from the brain and pen of Kirby, who spent much of his life despising Stan for, as he saw it, stealing credit.”
Now for many of us, especially me a longtime Kirby fan, this is of no surprise as I took umbrage with Lee claiming how it was, he, who created Black Panther during the documentary "With Great Power: The Stan Lee Story.”
Its more than a deconstruction of Stan Lee, with his many flaws, but also humanize the Man as this Carnival barker and charlatan only caring for his inner circle and by that, I mean his late Wife Joan and his abusive daughter JC. Larry Lieber laments on how Lee left him out or Marvel's rise to success. And that's within the first four pages!!!
Further testimony of how Lee didn't create mist of the Marvel characters if any, was his silly ideas thrown about at a Birthday party Hosted by Whoopi Goldberg: Femizon, a waitress who drinks a concoction that gives her supernatural strength; Baaad Girl, the child of a woman impregnated by Satan who refuses her father’s orders to bring souls to hell; and Chastity Jones, an alien-human offspring who’s sexually irresistible to men?
This is from the Man who "created" Thor, Hulk, Fantastic Four and Black Panther? Well, i'm not surprised because Lee never really had an original premise when creating concepts that define the Marvel heroes and villains.

"Stan Lee and I never collaborated on anything,” “It wasn’t possible for a man like Stan Lee to come up with new things — or old things, for that matter. Stan Lee wasn’t a guy that read or that told stories.”

-Jack Kirby during an interview in 1989
To his credit, Lee did promote the hell out of Marvel a once underdog, now the mainstream of Comics and Superheroes in general.He also promoted diversity while its competitor DC was still sitting in their "homogenized bubble".Stan for all his faults, spoke out against bigotry during one of his Soapbox Op eds and added snappy dialogue to Jack's plots and pencils. Bob Kane was a much bigger crook but  what Stan Lee has done, was very disappointing to me who met him in person, and asked "What happened between you and Jack (Kirby)"? Lee: (Somber voice) "Jack and I aren't speaking anymore.."
Anyways, True Believer is available now via Amazon or wherever Books physical and digital are sold!
Here's a preview courtesy of Google Books!
That's a wrap!
Excelsior!
Also read: Stan the Con Man Lee
Evan Racist Wood HBO MAX In Memoriam Mortal Kombat 11 News 4 Nerds Pop Topix Popular Opinions Racism Rush Limbaugh Stan Lee This Week in Pop Topix