Miami Vice finale: Freefall (1989)
Directed by Russ Mayberry
Reviewer’s note: Originally, I planned on doing a write up last year which was the benchmark of this episode’s 30th anniversary but was either sidetracked or too lazy. So now, here we are. 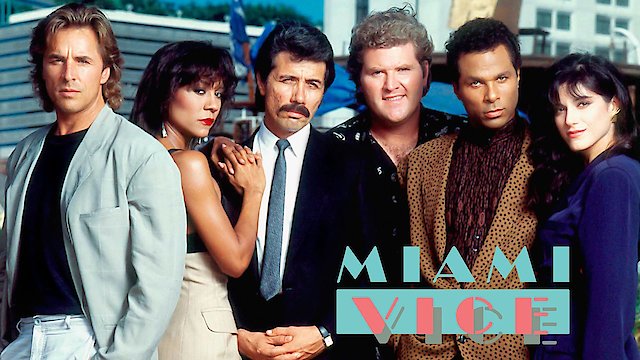 That quote pretty much sums it all! 1989, was the bookend of the greatest decade of popular culture. The 1980's was on its way out. But before fading out, there was this finale of yet another great series which defined  this exciting decade: NBC's Miami Vice 1984-1989.  This Crime Drama was innovative on so many levels, be it the implementation of adding rock songs within scenarios,  Jan Hammer's amazing soundtrack, adult subject matter that at times were disturbing,  solid character arcs, the introduction of then unknown actors like Julia Roberts, Bruce Willis and Wesley Snipes just to name a few, the bromance between Sonny Crockett and Ricardo Tubbs, gorgeous nightlife scenery, intense action and of course, the flashy attire.
These examples were the culmination that boosted the careers of Philip Michael Thomas and for the most part, Don Johnson who had his shares up ups and downs be it those godawful songs “Heartbeat” , a lackluster indie film Cease Fire, or a well-received voiceover in 1987’s G.I.Joe: The Movie
I was a huge fan of Miami Vice while growing up in that decade. Vice had great momentum until the fourth season, where there was this consensus that it was either running on autopilot or just burning out. I mean, when you have an episode featuring the Godfather of Soul, James Brown with aliens, " something in the water, does not compute"!! It was time to put Vice, on ice!
During an interview following the announcement of the series' cancellation, Actor Don Johnson said it best: "We told all the stories that could be told". 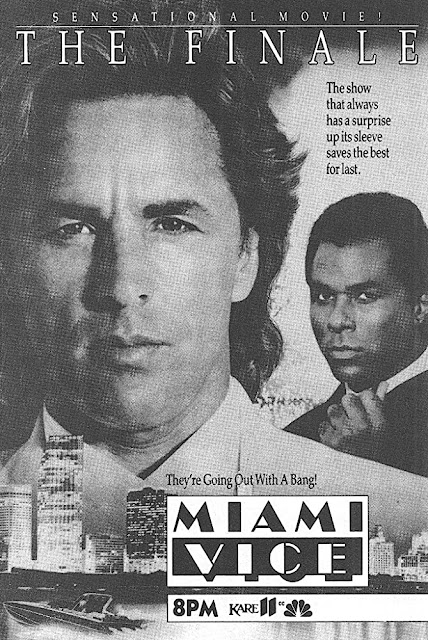 So with that said, let's get to it! The final episode, or rather episodes.1989's finale titled Freefall, was loosely based on the exploits if Manuel Noriega and meant originally intended as a 2 Hour special, instead ended up as a two-parter where Crockett and Tubbs are sent into a revolutionist South America to extradite a notorious Dictator, General Manuel Borbon (Deadwood's Ian McShane.) who can expose the drug cartel, in exchange for his life.At first Tubbs and Crockett are hesitant, but Rico feels that he and Sonny can make a difference by going to Costa Marada and getting hold of Borbon's list of drug suppliers and putting an end to the "War on Drugs". That is if they can make it out alive! 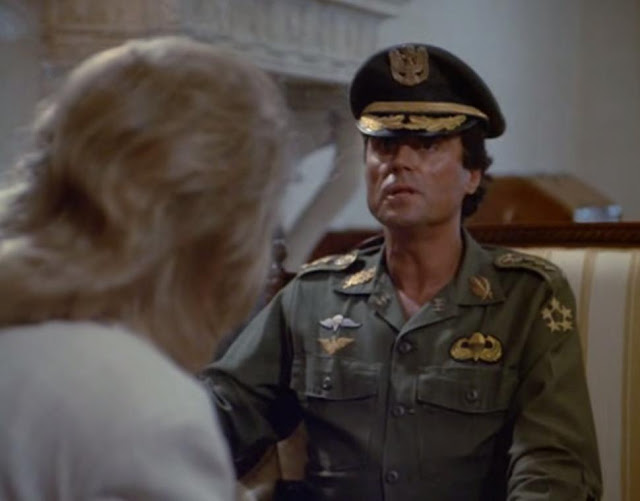 What I really liked about Freefall, was the epiphanies and uncertainty from our two major protagonists, serving as thus build up for the final episode i.e. Sonny is feeling  disillusionment with his career in a corrupt Law enforcement system and the personal losses that led him going to his darker side or Riccardo no longer feeling idealistic when it comes to making a difference, (Watch the lost episode; “Too Little, Too Late" that serves as this backstory for Tubbs and Switek.). Especially after having a brush with death after one too many shootouts. One involving a rebel soldier and contact Felicia portrayed by Epidilia Carillo of Predator fame, whose appearance was too brief like some cameo, but i guess her purpose was to keep the narrative flowing. 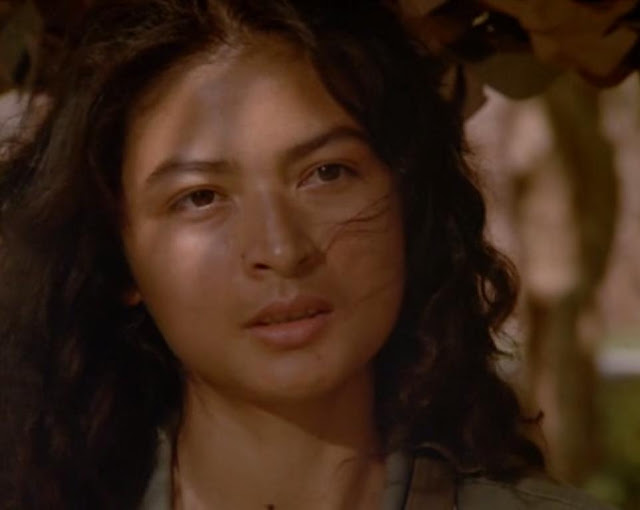 The flow and pacing is steady, however there a quite a few critiques, like wasted footage of pursuing Borbon's accountant, when they could have filmed more scenes of Gina and Trudy along with Criminal Informant Izzy. They were written as some one-off and let us not forget Switek’s unresolved subplot. His involvement in aiding Crockett and Tubbs while being suspended pending investigation, should have morphed into a cathartic outcome. Instead, it was left open-ended as we see his final appearance shrouded in darkness. A metaphor for what awaits him, I suppose. 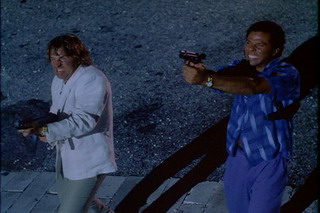 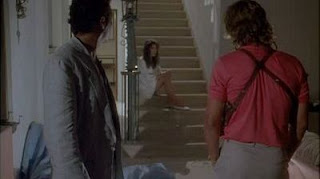 These minor complaints are overlooked by a few surprising twists, most notably from Colonel Andrew Baker (Sherman Howard of 1990's I Come in Peace.)  that involves a faked assassination plot. As far as the action sequences, there were a few highlight gunfights, mostly when it came to Crockett and Tubbs protecting Borbon. However, it is the final shootout that serves as the payoff where the two Vice Detectives go all "Butch Cassidy and the Sundance Kid” near the end with a perfectly timed song "Bad Attitude " courtesy of Honeymoon Suite.
Instead of going for another ballad prior to a final showdown like Phil Collins' "In the air, tonight", Director Russ Mayberry opted for a power anthem and when listening to the lyrics “Yesterday’s Heroes with no room to grow ", it’s a great way of paying tribute toward these iconic Cops, as they rush in like G.I.Joe (80's reference for you Gen-z's out there!) while being  faced against overwhelming odds when the adversaries are Baker's federal agents. This scene was a callback to the conclusion of Miami Vice's Pilot Episode "Brother's Keeper" with Calderon escaping via Seaplane. But this time, it is not some Hispanic cartel nor does the bad guy does not fly off into the moonlight! its interesting of note, to see Tubbs wield two guns prior to the dual hand trends seen from today’s action films . 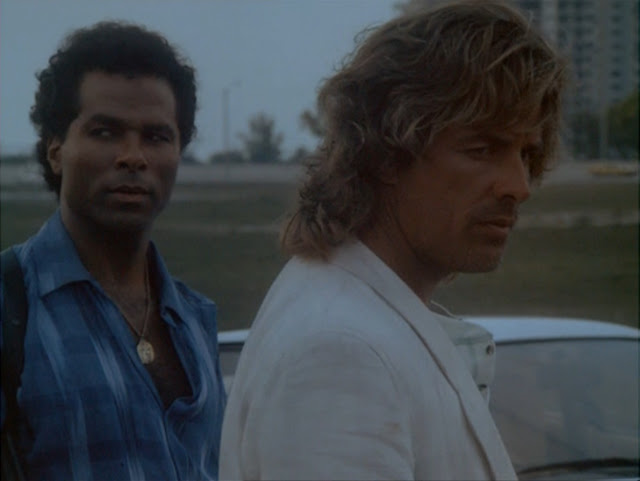 Freefall without a doubt, was a fitting swan song for a once beloved series that sadly, lost its way during the latter seasons. The ending followed by closing credits was bittersweet especially  when rolling out clips from past episodes accompanied by the Terry Kath’s ( Known as The White Ray Charles, of the band, Chicago) “Tell Me”. Unlike most Television series at the time, Miami Vice at least, had a cathartic closure when other canceled shows were left twisting in the wind due to unresolved plotlines or major cliffhangers.As one of the first and best series finales ever, I concur with the tagline of how it went out “with a bang”, just like the 1980’s!
. 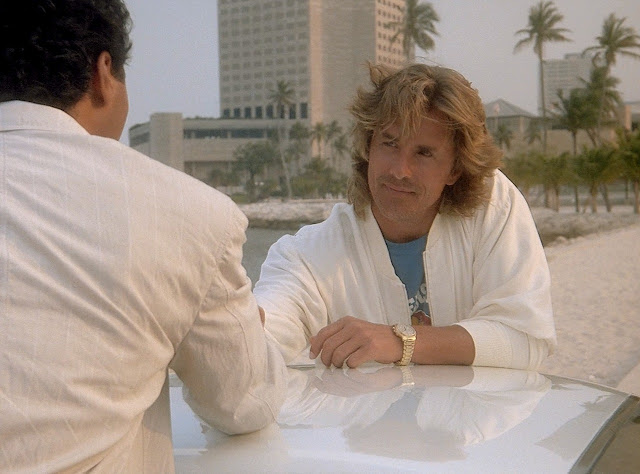