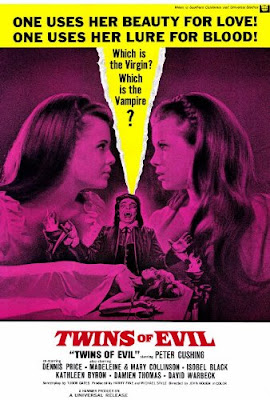 Welcome back to “Its Hammer Time, where I pick a few of my favorite films from that Haunted House of Horror  across the Atlantic, Hammer Films! Here's yet another of my favourite recommendations-Twins of Evil!

What happens when a thrill seeker gets more than what she bargained for? Well, Hammer's Twins of Evil has the answer! Loosely based on the vampire tale Carmilla   and part of Hammer’s Karnstein Trilogy, (And often seen as the prequel despite its release after the previous Films: The Vampire Lovers and Lust for a Vampire.)  Twins of Evil, is set within nineteenth century middle-Europe, where orphaned teenage twins Maria and Frieda go to live with their uncle Gustav Weil, (Played by the legendary actor and Hammer staple, Peter Cushing) who heads the Brotherhood, a vigilante religious sect whose holy crusade is to stamp out vampirism. However, their methods are very arbitrary and inappropriate to the extent of persecuting those who they deem “guilty” mostly innocent young and beautiful women. You have to appreciate its meta, when there are those who pronounce judgement toward "liberated"  women in general.

But Weil is not 100 percent wrong, as the real menace lies within local resident and sadist Count Karnstein, (Damien Thomas) who would stop at nothing when seeking forbidden pleasures, but to what extent? Despite the twins being identical on the surface,  Frieda is enticed by the Count's presence and heads to the Count's castle where all Hell literally breaks loose! Twins of Evil is one of the few overlooked but great films from Hammer’s collection, which and of course the titular protagonists played by real life gorgeous twins; Mary and Madeleine Collinson who were in fact, Playboy Playmates. 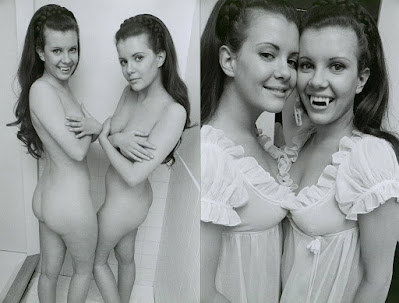 During the start of the film, Gustav and the Brotherhood, performs a siege within female peasant’s home just when she was about to get it on with the Count. Karnstein mocks Weil and because of his “Diplomatic immunity” prevents him from being harmed by the brotherhood. Upon investigating a corpse with bite marks on his neck, the Puritan zealots apprehends an innocent woman nearby and under the allegations of Witchcraft as in that all too familiar tradition, she is burned to a stake! 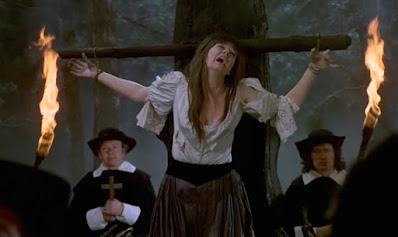 "God is calling on us who believe in His holy word to stamp out that evil, to seek out the devil worshippers, and to purify their spirits so that they may find mercy at the seat of the Lord... by burning them"!

While Maria is kind hearted with a sense of naivety, Frida is  malicious. but if there is one thing they both have in common, is their disdain for Uncle Gustav and his austerity. 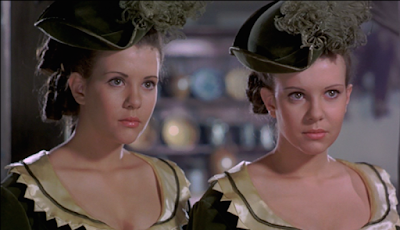 Meanwhile, the arrogant and pompous "Karnie"  has made a deal with the devil (literally) in order to achieve immortality by murdering a girl as a human sacrifice, which calls forth his ancestor Countess Mircalla Karnstein to rise from her grave. As a debt of gratitude, Mircalla then turns the Count into a vampire.Frida being  the rebellious spirit-intrigued by the count, meets up with him and becomes "converted" herself, which she so proudly embraces. 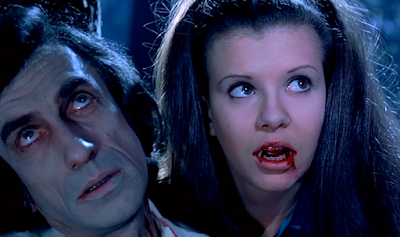 The Village’s teacher, Anton, who is initially infatuated with the more mysterious Frieda, has studied what he calls "superstition", and is convinced of the existence of vampires after his sister had fallen victim to one. It’s interesting to note that Anton called Gustav and the Brotherhood out for solely going after Women whom they “suspect” for being witches, but not the evil Count himself due to his sovereign status. "Black Magic privilege". perhaps? 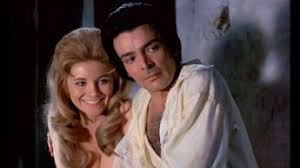 The devil has sent me.... twins of evil!

Aside from scenes of burnings, stabbings and decapitations, I don't fully understand why this film was slapped with an R-Rating. There was no nudity (Okay, with the exception of Frida's Breast shot.) and even the burned at the stake scenes were did not really justify TOE as a Film that really pushed boundaries as far as being explicit or exploitative but its more than what is usually seen from previous Hammer’s  amazing film library nonetheless.

There were at least, one underwhelming example of cinematography especially during the film’s intro  with a cheap juxtaposition of  flames into the foreground while the actress looked somewhat convincing when being burned at the stake. Yes, this was early seventies quality, so it's okay. 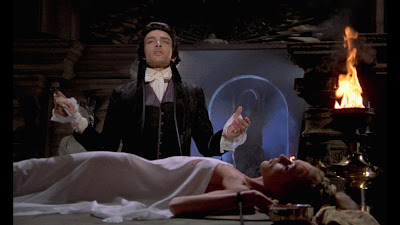 The storyline gained more momentum during the final showdown between the Brotherhood and Karnstein and it’s a go for broke moment. I couldn’t help but laugh at how the Count's mute servant, Joachim who was left behind to fend off the Brotherhood while the Count makes an escape attempt. And as much as I like TOE, it’s not immune from two unintentionally comedic scenes. Aside from that burning stake intro, I found Joachim to be somewhat of a racist caricature.

Here you have this hulking black servant who is mute, yet his only method of communication is making ape like sounds. There's this infamous scene in which Joachim warns the count, which  comes across like some  Mel Brooks horror spoof. Cushing's performance was very adept as the dogmatist puritan prick Gustav Weil, while David Warbeck (The Beyond) transition from a mild mannered Teacher to this heroic Vampire Slayer, was a rushed character development arc, however,  its Madeleine Collinson, who really was the spotlight in ToE  as the villainess Frieda who despite her threats and mistreatment of her twin sister Maria, she emotes a sign of concern for her sister out of fear that her vampire urges may take hold of her and in doing so may bite her neck.

During the beginning and end of the film, I had to chuckle at Harry Robertson’s  intro theme which sounds akin to a Saturday morning Superhero cartoon like say, Justice League? It is of no pure coincidence since Bruce Timm is a big fan of Hammer's Movies so there you go. Aside from minor gripes, Twins of Evil is another buried gem within the hallowed halls of Hammer. I  very much enjoyed this arguably superior film from the Karnstein trilogy! Its sexy, stylish and great for a few mild scares! I highly recommend you check it out just for Cushing's performance alone, and of course..... 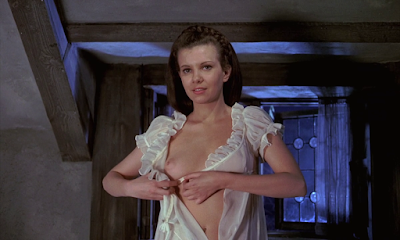 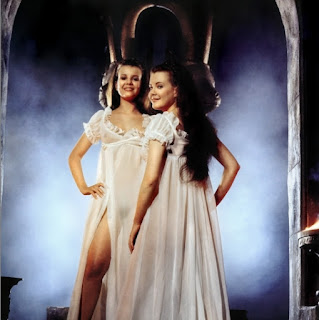 Twins of Evil is available now on Amazon Prime Video  or, you can always purchase the Blu-ray. 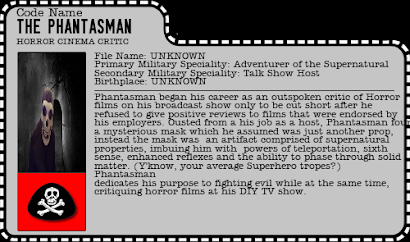