Oh how I fondly remembered that jingle from the animated series featuring the iconic Webslinger whose titular series  appeared on syndicated networks during the mid to late 70's. (Despite having  originally making its debut during 1967 on ABC Saturday Morning.) What's  amusing about the Spider-Man series was the unintentionally hilarious seasons (Two and three, respectively.) courtesy of production animator Ralph Bakshi Fritz the Cat, Heavy Traffic, American Pop, just to name a few. and Krantz Films.

Krantz had taken over production of the series after the previous animation studio, Grantway-Lawrence,  went bankrupt. And with them, Stan Lee and John Romita's input was gone. This would explain the lack of quality when it came to animation, generic villains and background music that occurred when Krantz Films had taken control of the series. It was apparent that Spidey's show had taken a turn for the worse! Krantz had reduced the budget dramatically, while taking half measures via cutting corners.

For example, the quality of animation looked watered down and by that definition, I meant literally! The backdrops looked as if it was brushed via watercolor paint, then there's  bland designs, choppy frames and not to mention, reused stock footage from the previous season. The villains, as I had mentioned earlier, were all generic one notes who couldn't fill the shoes of Spider-Man's rogue gallery.

Where's Sandman, Vulture, Electro, Green Goblin or Mysterio? Well, suffice to say, Mysterio did make an appearance, but as some four eyed dork instead of the ominous Steve Ditko designed green and purple cloaked guy with a fishbowl as a helmet.

Here's just an example of what I'm referring to:

For starters, there's one episode which involved a society of plant creatures with the intent of world domination. Then, there's some evil scientist who hijacked a nuclear power plant and, in doing so, lifted the entire island of Manhattan over the Earth's atmosphere....recycled for THREE different episodes!!! In one of them, said scientist was a pointy eared Atlantean.

That particular episode was titled Swing City. Throughout the 20 or so minutes, there's Webhead swinging around for 5 minutes: no dialogue and, once again, stock footage from previous episodes.

The worst case scenario is when Bakshi used entire footage from his previous cartoon, Rocket Robin Hood (that episode was titled  "Dementia 5"

for the Spider-Man episode; Revolt in the 5th Dimension. The only difference was that Rocket Robin Hood's animation cels were swapped for Spider-Man. Such a pathetic excuse for cutting costs in order to fill in nearly 20 minutes of an episode.

It seems that Bakshi/Krantz had already ran out of creative writing and ideas when going on to this project. I often got a good chuckle whenever I saw Spidey swinging over those psychedelic clouds accompanied by a very atmospheric but silly jazz soundtrack. Ahhhhh,  the 60's.
The stories were very lackluster with the noted exception of "The Origin of Spider-Man".

Then again, said episode was based on the source material, the comics themselves. Nonetheless, I felt what's known as "geek pimples" when Peter realized that with "great power, comes great responsibility"!
Parker's epiphany of course, was after capturing Uncle Ben's killer, he realized a tragic mistake when letting the robber escape and in turn, killing Ben.
This  scene, was ironically the most powerful theatrics from the entire series thanks to voiceover artist Paul Soles.

"Uncle Ben is dead. And in a sense it was I who killed him". Robbers, killers beware-Spider-Man is here!

Arguably, Spider-Man has the best superhero origin. No, not because he was bitten by some fucking radioactive spider, but instead, Peter Parker's motivation for being a superhero. His hero's journey is relatable to many of us who were treated as outcasts. Parker was seen as some loser in High School, who after acquiring special powers, misplaced his angst and hubris on society, only to become a superhero when realizing learning: "With great power, comes great responsibility."  Followed by a striking narration also from Amazing Fantasy #15

The other good episode that stood among the Bakshi dumpster fire, was  "Criminals in the Clouds" in which Peter rescues some prestigious all-star college quarterback who has been abducted and held for ransom courtesy of some criminal mastermind who is also a commander of a giant airship??

I couldn't make this shit up if I tried. Eventually Parker as Spidey rescues the athlete, only to be treated like shit as he watches the quarterback achieve praise from his peers, and of course the chicks. To top it all off the coach fires Peter as the waterboy for not showing up during the game. WTF!

So here's Peter Parker: An under-appreciated classmate who is often seen as a loser in the crowd, yet does the noble thing by going against what some may say-"better judgement" to risk his life while thwarting the sky criminal mastermind (who is seen dying in flames as the airship descends).

Despite his bout with envy of this well to do punk, Spider-Man eventually does the right thing without reaping reward because, "action is his reward"!

Regardless of Bakshi's "effort", as a whole, both second and third seasons pale compared to its 1967 Grantz-Lawrence predecessor.

That being said, Spider-Man was just a stepping stone for Bakshi as he has moved onto bigger and better endeavours. Still to this very day, whenever I would run into Bakshi's Spider-Man cartoons, I can't help but smile...which quickly turns into outbursts of laughter. We're talking Mystery Science Theater material here. It's not perfect by any means, but  an amusing animated "acid trip"! 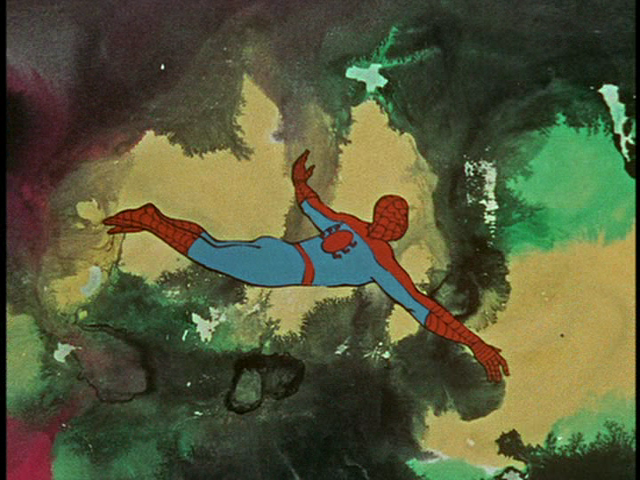 At least we had Spider-Man and his Amazing Friends, the 1992 animated series, Spectacular Spider-Man but not so much the abysmal Ultimate Spider-Man.

In memory of Steve Ditko. The equally responsible for Spider-Man!