Whenever someone mentions, "Tatsunoko", the first thing that comes to the minds of many, Speed Racer, Robotech and Battle of the Planets..um, yes and no!

Although all three shared a huge amount of success and pop culture status within the states, they were simply bastardized adaptations which for the most part, sacrificed adult content, profane language, death and of course violence in order to adhere to the standards and practices of American television.
Note: Despite having certain content removed, Robotech was a far less example of heavy edits since most of the violence was left intact. 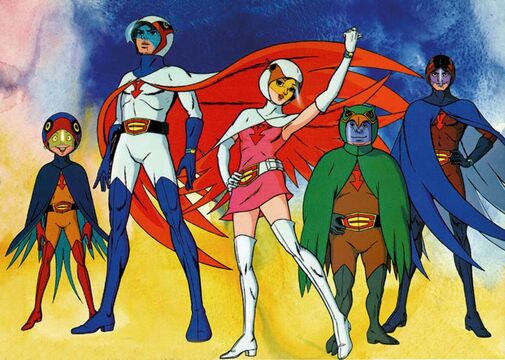 Founded in 1962, Tatsunoko Productions is responsible for groundbreaking animation and bending genres to accommodate both children and adults. They were the staple of Japanese animation because of early trendsetting series like Mach Go Go, Macross and of course, Gatchaman.
Released in 1972, Science Ninja Team Gatchaman is about five Superhero Ninja teenagers, recruited by an International Science Organization to thrwart the Alien terrorist syndicate called, Galactor led by the androgynous Mastermind, Berg Katse from destroying the earth if not conquer it. 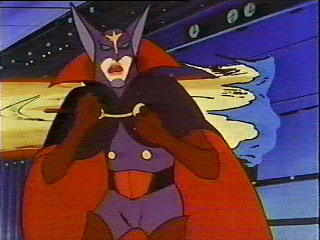 The producers were big fans of the Superhero genre, so it was of no surprise that Gatchaman was the Japanese studio's answer to both Hanna Barbera and Filmation's Superhero animated shows during that era, but the tone of the series did not shy away from violence, pathos or topical subjects like government intervention and climate change. The mecha was ahead of its time as were the emotional content which no American animation studio can compare nor compete against. After two seasons followed by less than favorable succeeding series, Gatchaman, despite being the progenitor of Super Sentai shows, wasn't as relevant as time went on, especially since there were so many anime series that soon followed. 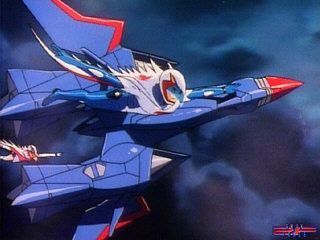 Fast forward two decades since the last airing of the series, where there was this resurgence of  old Tatsunoko intellectual properties beginning with a remake of Tekkaman, followed by Robot Hunter Casshan and eventually, Gatchaman which debuted in October 1,1994 as a three part OVA series, produced by Tatsunoko with animation courtesy of ArtMic. (Genocyber, Bubblegum Crisis and Dangiaoh to name a few.)

What's interesting is that these projects, were designed by Art director Yasuomi Umetsu.
For those who are familiar with his work, the controversial OVA, "Kite" would often come to mind. Umetsi-San has a distinctive style that delivers sharp character designs with a dynamic aesthetic. 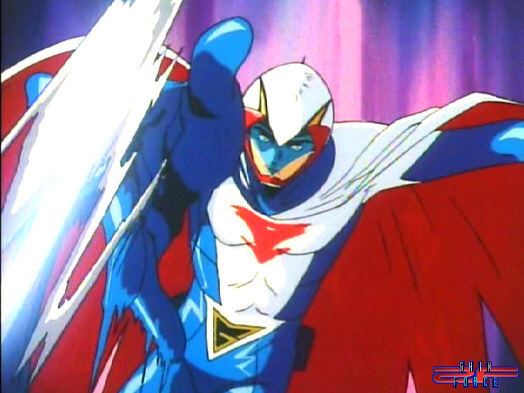 Released in mid-1994, Gatchaman is like a best of compilation, reimagining scenarios and events from the original 1972-1974 episodes from the popular series.
(e.g. "Gatchaman vs the Turtle King", "Secret Red Impulse" and "Countdown 002".)
That's where the similarity ends since the animation, outfits and vehicles have been redesigned from the ground up! 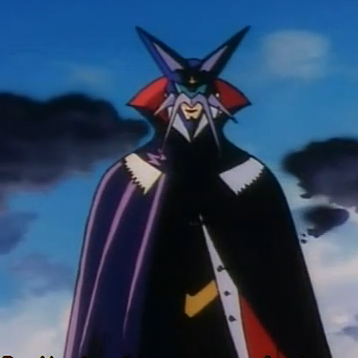 In the first Original Video Animation, the Science Ninja Team, has been dispatched on their first mission to stop a gigantic mechanical beast, piloted by Galactor from destroying any further cities when trying to neutralize a power source known as the Mantle Plan.

It begins with the state of Hotwaii succeeding from the International Science Organization, only to join forces with the terrorist group. For those who refuse to comply, are met with a far less fortunate outcome. The scene where a captured airliner, with children among the passengers, is some fucked up shit to see, even after 25 years!

Gatchaman begins their baptism by fire, literally speaking, when thwarting Galactor's plans. However, it's only the beginning as both Leader X and the gender bending Berg Katse launches more devious plans than the first!Gatchaman OVA is one of the very first remakes of an old Anime series, which is now commonplace more so than ever within the Japanese medium.

Aside from the impressive updated designs, the story and dialogue are decent and formulaic as in some Tom Clancy movie, yet entertaining. Gatchaman's fight scenes bleeds with Superhero essence and whenever you see Ken, Jun, Junpei, Joe or Ryu kick ass onscreen, it’s a welcomed addition.

The fast pacing overall, is essential when going through a limited window of three 45-minute episodes, which is enough to satisfy diehard fans of the OG series. Sadly, unlike the 100 plus episodes of the original series, we don’t get to know the full background of our protagonists, other than a flashback sequence involving the murders of Joe’s parents, thus fueling his desire for revenge on Galactor. And there’s a reveal regarding Red Impulse.

Despite that there's so much story material that could have been thrown in from Gatchaman's catalog of great episodes than what you have seen, the OVA serve as brief summary of Gatchaman lore. However, there’s enough stuff to satisfy fans of the series, whether it's the team fighting giant monsters, an army of Space terrorists, or just piloting those well-designed vehicles, like Joe's car, that looks better than the goddamn Batmobile!Yeah, I know..."Blasphemy"!! 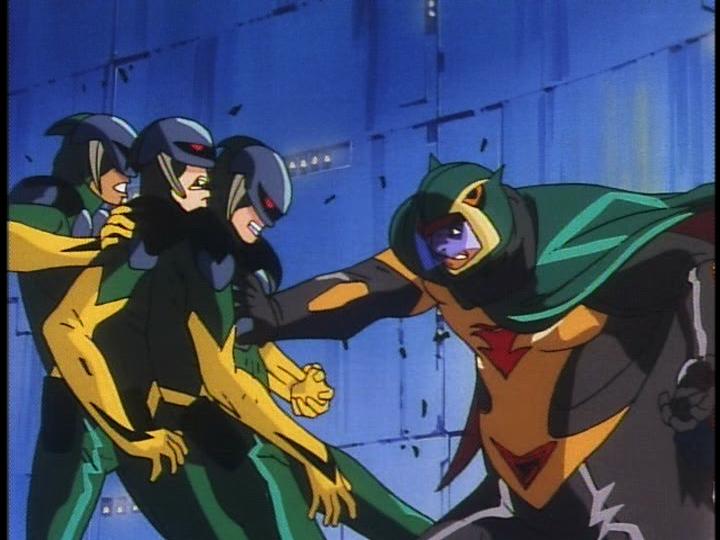 The third and final installment, Countdown 002, was a remix of the first Gatchaman season and the shocking finale from Gatchaman Fighter. I loved how the OVA gave us a more positive and cathartic finale.What's even more cool, was the ambiguous resolution, which unexpected appearance was either a callback or something, rather "someone" from a parallel universe.

Either way, it was a poetic conclusion, especially when accompanied by Bill Myers and the late great Maurice Williams' theme song "Let's Fly".

Gatchaman OVA was and still is a must watch for fans of the original series or admirers of cool shit, without the filler. 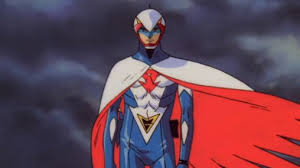 Gatchaman OVA is available for streaming via VRV/Crunchyroll's streaming service.

October 2019 marks the OVA's 25th anniversary, so I couldn't go on for another year without paying respect.