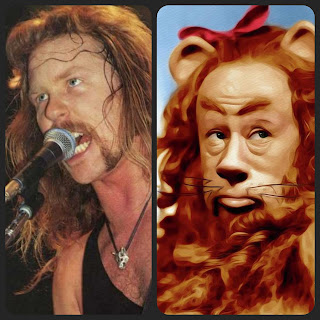 Well, if you ask someone like me, who listened to a good deal of their music catalog since the nineties, um, no.
One of the forefathers of Thrash Metal, has performed for a Helping Hands concert, that aired on Paramount Plus the other night. That explains why the seminal band appeared on a few interviews as of recent and good for them.
Me, aside from a few great songs including the 1990 Ballard, The Unforgiven, I was never a fan, in fact I thought they were overrated, as in "Guns n Roses " overrated.  Speaking of whom, I discovered a video published by Heavi, about “, People who can't stand Metallica's lead singer and guitarist, James Hetfield. And while the usual suspect Dave Mustaine, was listed, the somewhat surprise or no surprise, was Guns n Roses frontman, Axl Rose who claimed that Hetfield is a racist.
During a headline tour with Ice-T and his Metal band Bodycount, Hetfield objected to sharing the stage with a (Hetfield's words) "nigger." Axl who got in a bit of controversy for his song "One In a Million" was not exaggerating when making said claims, as a singer from GnR's Use your Illusion actually witnessed Hetfield's hateful comments.

“I heard James say, about Ice-T, because Ice-T was supposed to join us on the tour, he said. ‘I don’t want to share my stage with a, n word.'”

It's funny how Ice-T 's "There goes the neighborhood " foreshadowed racist jealous pricks like Hetfield, who get intimidated when a Black person performs or outperform within the same music genre, codifying the racists as Gatekeepers. No wonder why Tupac and Snoop Dog, snubbed Hetfield during an MTV VM Awards ceremony and embraced Kirk Hammet instead. Probably because Pac assumed Hammet was Black when in actuality, he's Filipino.The irony of it all, is that one of Metallica's earliest contributors, Lloyd Grant was Black but that didn't change Hetfield's opinion about Black people, I guess.
I heard rumors about Hetfield's antics during the late nineties and had debates with my ladyfriend at the time, who was a huge fan of Mettallica and how they can never do wrong. Note how I said "Ladyfriend at the time." As if that wasn't enough, enter the silly documentary, Some Kind of Monster where the band make further asses out of themselves, by bitching about File-sharing services like Napster, Drummer Lars Ulrich rubbing shoulders with the uber rich while purchasing art, Megadeth Dave Mustaine crying like a pussy, during some therapeutic session with Lars, and some other bs narcissistic scenarios. What’s even funnier, are the accusations of Metallica ripping off songs from other bands throughout the decades. We got the receipts for the doubters out there by the way.
Metallica is now a shadow of its former self and despite some resurgence in popularity via Stranger Things, there has been pushback because of Hetfield's past comments, via calling him out but as far as the fanbase is concerned, "nothing really matters."
"Never forget!"
Yes, this was Hetfield, more like "Hatefield" and his dudebro Ulrich giving the salute. 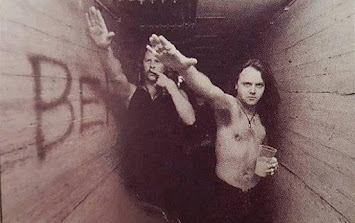