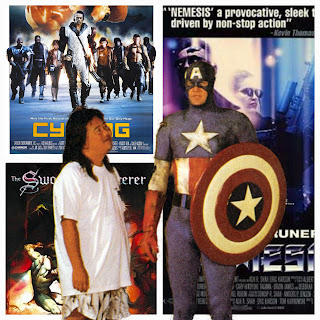 Oh, f**k! That scene where Selina shooting a circular "exit" through the floor, was copied from Pyun's cult classic, Nemesis. RIP. https://t.co/6HmVb5s9Vo

There were many deaths of celebrities, including my favorite pop culture icons, which unfortunately, I didn't get a chance to cover this year due to other commitments. Not to mention how the PN staff has personal obligations as well, but while I have a bit of free time, I thought I would sadly, add this latest passing in the "Obituary column." Director Albert Pyun has died Saturday in Las Vegas, Nevada at the age of 69.
Pyun's filmography was mostly looked down upon as niche albeit, "low brow genre flicks" ranging from Sword and Sorcery, Superheroes, to Dystopian Martial arts productions.
Throughout his career, Pyun has worked with various well-known or not very known actors like, Courtney Cox, Tim Thomerson, Oliver Grunner, Thomas Jane, Christopher Lambert, Ice T, Rutger Hauer, Burt Reynolds, Charlie Sheen, and of course Jean Claude Van Damme. 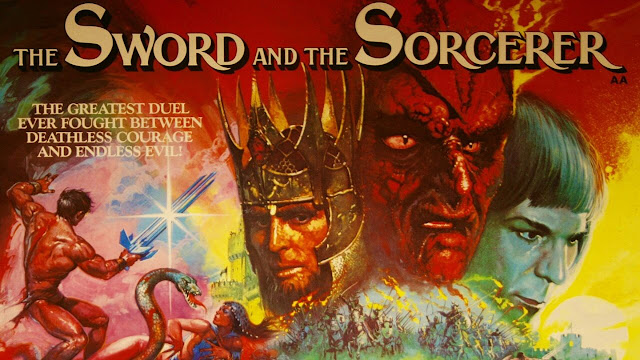 My first introduction to Pyun, was through 1982's Fantasy epic, Sword and the Sorcerer which at first, had me question the casting of television actors, Lee Horsley (Matt Houston) and Richard Moll (Night Court) but to my surprise, their respective roles as Talon and Xusia, were the standouts of this Medieval actioner with a dose of horror. Just look at Moll's scenes as the menacing sorcerer Xuxia, which was the stuff of nightmare fuel and is Pyun's most successful film that further gained traction thanks to the VHS boom. When I got wind of a Captain America movie in the works, I was excited despite my skepticism of Matt Salinger being cast for the role as Steve Rogers/Captain America.
Sometime later, a friend of mine at the time, who worked for Marvel, told me that he saw the screener for the highly anticipated movie, and in his opinion it sucked. Eventually I got a copy of 1990's Captain America and while the first encounter with Cap against the Red Skull, showed promise, the rest of the movie fell by the wayside with bad pacing, and a not too convincing performance by Actor Matt Salinger who aesthetics wise, does not bear Rogers' signature stoic looks.  To make matters worse, Salinger wore the costume (with plastic ears?!?) on two occasions. Sure, the preachy environmental subplot foreshadowed the concerns of climate change, but Captain America is one of the most disappointing films I have ever seen, not even Ronny Cox or the late Ned Beatty could save it from its critical flogging which put a dent in Pyun's career.

"Stalkeye - hopefully you'll find my director's cut of Captain America an improvement (nowhere to go but up I guess). It better reflects the movie we shoot under horrible funding conditions."
-Albert Pyun 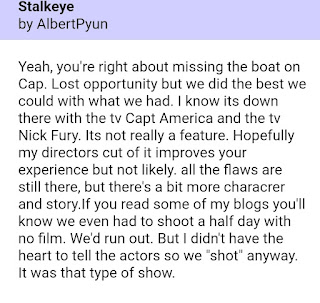 I expressed my dismay to Mr. Pyun in a thread from the site that shall not be named, and the Director responded to me with a somewhat valid explanation along with his dissatisfaction with the Marvel based project. 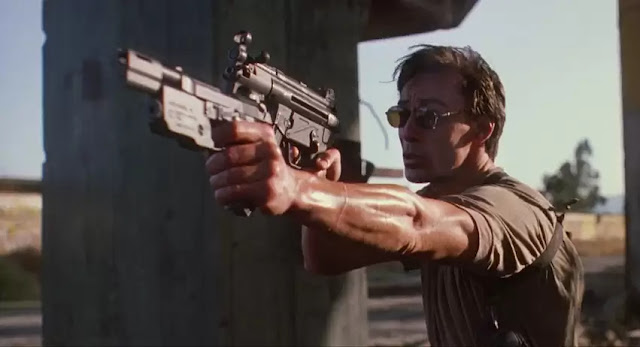 In 1992's Nemesis, featuring Martial Artist Oliver Grunner as Alex Rain, a retired Cyborg Counter Terrorist operative, who is forced to transport the "soul" of his ex-lover Jared, who Alex is charged for her murder.
Nemesis was Pyun's most ambitious project post Sword and the Sorcerer, that’s in several ways influential and is one of the most underappreciated Cyberpunk films of its time. On the surface, Nemesis style is reminiscent of the late 80's early 90's Anime with a dose of Marvel's Deathlok worldbuilding. (e.g., Tim Thomerson's Commissioner Farnsworth mirrors that of the mad Cyborg Hellinger, and like Deathlok being forced to carry a briefcase with a bomb attached, Alex has a bomb implanted within him, while transporting his Jared's data in a post-apocalyptic setting.) 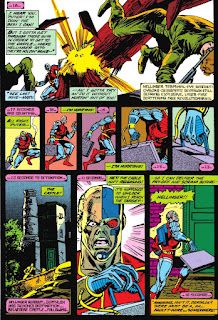 Then there is the obvious Blade Runner, Terminator and Escape from New York influences, so how could I look down on a film that has commonplace with my favorite Post apocalypse films of old? I can't because despite a few ideas lifted from a Comic and a few iconic movies, Nemesis throws in a few fresh concepts of its own, as an unapologetic Sci-Fi western making it a cult classic without the poetic symbolism from Blade Runner, nor Terminator's horror tropes. However, the extended ending was bleak af. With a more polished script, and a bigger budget, Nemesis could have easily held its own against what I call, the "Triumvirate" of early 80's Dystopia. But as it stands, still an enjoyable Guilty pleasure, which I feel no "guilt" for liking Nemesis, whatsoever. 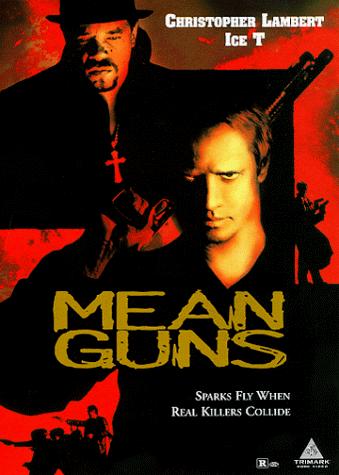 Pyun went on to direct more films, including Mean Guns which paired Christopher Lambert with Ice-T, and sometime afterwards he won an award for Road to Hell, a spiritual successor to Streets of Fire as Best Picture at the Yellow Fever Independent Film Festival in Belfast in 2011.  In 2014, Pyun announced that he has Multiple Sclerosis, then in 2017 he was diagnosed with Dementia. 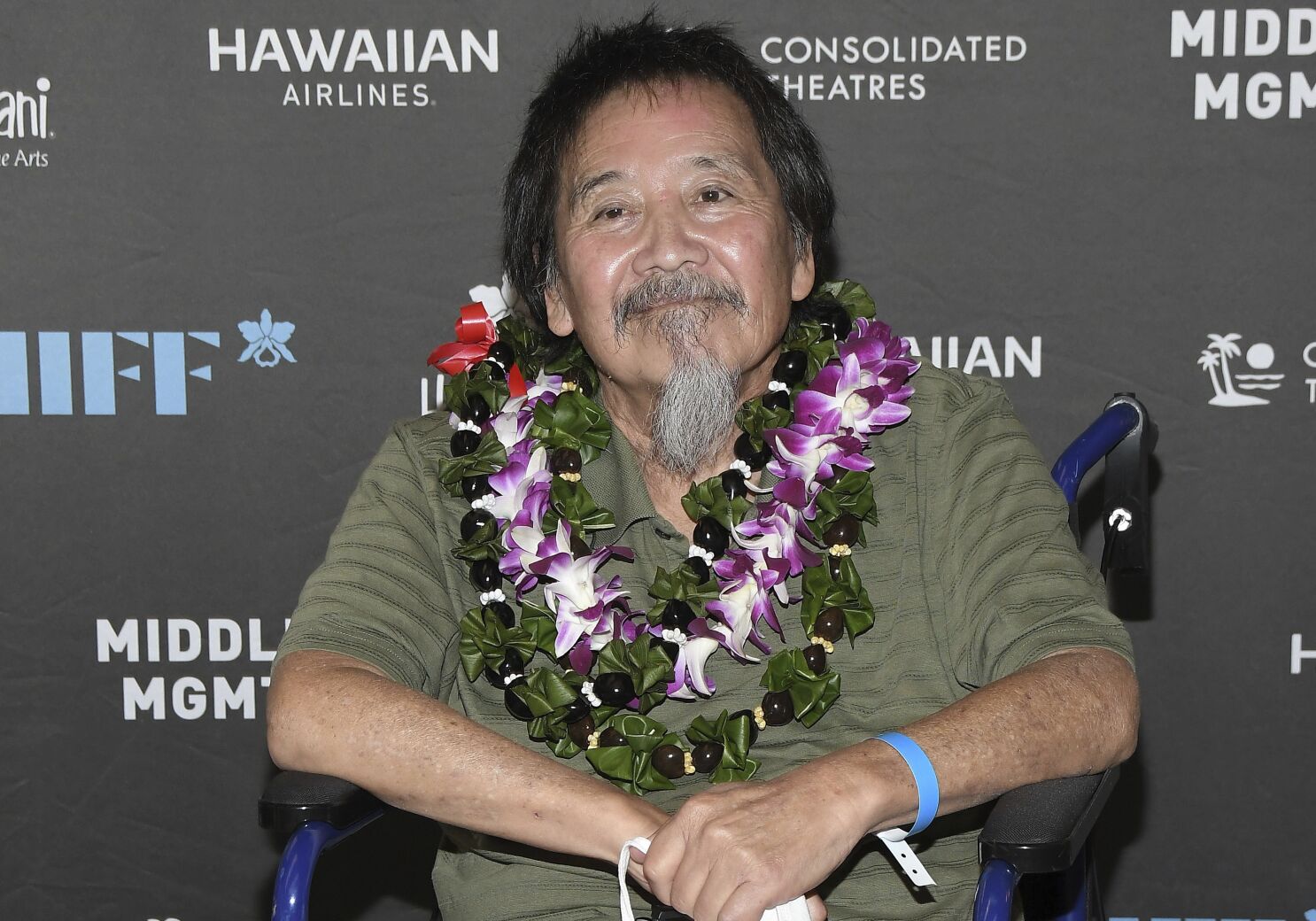 This is very sobering as he was a talented, and respectful guest during the Talkback threads where the commentators were merciless and while I critiqued the hell out of his Captain America, I gave him props for Sword and Nemesis.  Unfortunately, I was not aware that he responded back to me, as the site's comment thread was antiquated, it had no edit function nor any notifications of replies, like Disqus.
Al handled the unwarranted abuse like a champ, and truth be told, he was not the "Ed Wood" of modern cinema, that role belongs to the German hack Uwe Boll. At least Pyun had three hits in his CV, can't say the same for the man who ruined both House of the Dead and Bloodrayne.
Rest in Eternity, Mr. Pyun and a belated thank you.
Trivia:
Thus, codifying the self-contained "Pyunverse."
Albert Pyun Asian Action Films Captain America Cult Films Cyberpunk Dystopian Films In Memoriam Infamous Directors Overrated or Underrated Stalkeye