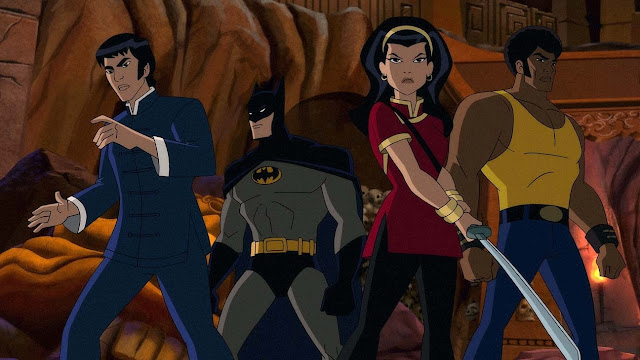 Its another year, and guess what that means? Its time for another animated Batman featurette!
However, it's a much different spin on DC's most beloved brooding hero because Batman Soul of the Dragon is a love letter to 70s pop culture as Kung Fu ,Blaxploitation flicks but unfortunately not enough Grindhouse.
The plot involves  Batman reuniting with his former classmates under the tutelage of the missing  O-sensei to prevent a mythical sword called the Soul Breaker, from opening the Gates of Hell! Okay, not really hell in the "biblical sense" but a gateway to some demonic realm called Naga. 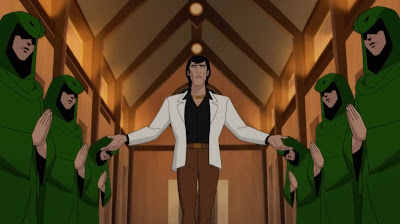 The prologue begins with a Retconned Richard Dragon, who bears a striking resemblance to legendary Martial Artist and Philosopher Bruce Lee as some James Bond esque spy, even the intro pays a clever homage to the 007 franchise. Richard's design was obviously intentional since WB owns the rights to Enter the Dragon, besides, who would be a better fit for this progressive version none other than Lee? 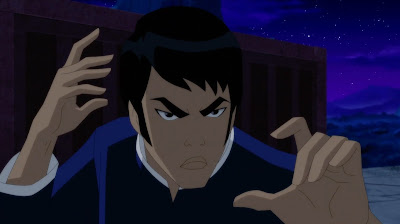 As for millionaire Nightclub owner Bruce Wayne, he just cant seem to get his shit together when it cones to dating because of his "dark secrets" that he left hidden a long time ago. And just when he was making an attempt adjusting to a normal life Richard brings him out of retirement to stop Jeffrey Burr, who runs a Cult like Terrorist Organization called "Kobra". Yes, prior to the "Cobra" we all know and love, this was the first "ruthless Terrorist Organization determined to rule the World "!
Will the disillusioned Bruce go back to his old habits as Gotham’s Dark Knight or avoid his class reunion altogether?
What sets Soul of the Dragon apart from the other Batmaninated movies, aside from the 70s Elseworlds premise, is Bruce's backstory of how he became this disciplined combatant while forging a friendship with his classmates within O-Sensai's  Monastery as  told via sporadic flashbacks. 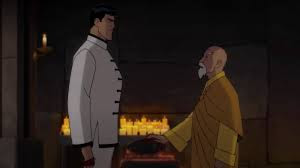 However, the story itself is more focused on teamwork emphasize opposed to the "Chosen one who can save the world" trope. Batman feels as equal as his other teammates Richard, Shiva and Ben Turner who at first glance, looks like a throwback caricature of the Blaxploitation genre but the big giveaway is that he is voiced by Actor and Martial Artist Michael Jai White no, Michael isn't playing as Black Dynamite instead, another familiar character and here's a clue for the uninitiated,  the initials "BT". Nuff said!

The animation is what you might come to expect from a Bruce Timm DCAU project and while Kevin Conroy is notably absent as the iconic voice behind Batman, David Giuntoli does a decent job despite being overshadowed by Michael Jai White, Kelly Hu, Mark Dacascos and James Hong. While the writing is standard Superhero and action cinema its far from being dull or uninspired. The fight scenes are brutal especially when Shiva is involved while the dialogue between our protagonists are entertaining if not philosophical, one in particular was the exchange between Ben and Bruce who he refers to him as "White Rice" during an "affirmative action asswhuppin" Turner sees Bruce Wayne as this rich privileged brat, yet earns his respect for holding his own. 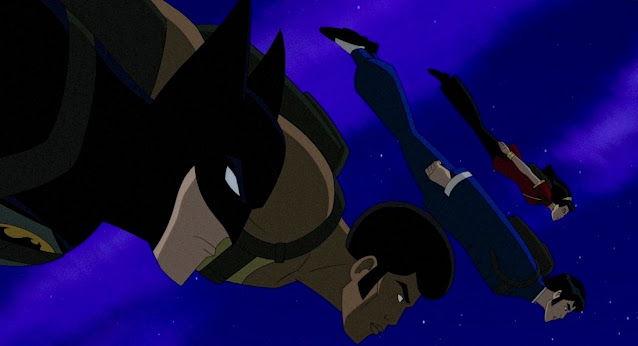 Soul of the Dragon is a much watch whether you're a fan of Chop Socky, espionage or ensemble heroes. There's a few Easter Eggs thrown in and we get to see Bruce's prototype car which will eventually be the Batmobile. Also, I liked the camaraderie between the group and it's a  slight (Unintentional) DC answer to Marvel Netflix's The Defenders miniseries,  but much better! That said, I wished they used Neal Adams' light blue and grey design since it was conceived during the seventies. Although this film was dedicated in the memory of  legendary comics scribe Denny o' Neil, who passed away last year, a posthumous shoutout also goes to another DC writer Martin Pasko (1954-2020), who co created Kobra alongside Jack Kirby,  written one of the best G.I.Joe episodes ever- "Worlds without End" and the co written the critically acclaimed Batman: Mask of the Phantasm. Rest in Peace.
Animation Nation Batman Bruce Lee BruceTimm Cults DCEU In Memoriam Martial Arts Terrorism