Pop Topix: The Doctor is in! 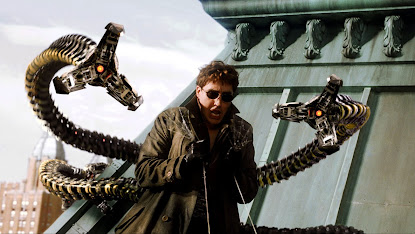 And he's baaaaaacccck!
Say it ain't motherf*&^% so, actor Alfred Molina, mostly known for his brilliant performance as Doctor Octopus from 2004's Spider-Man 2, will reprise his role in the upcoming Spider-Man 3 along with another old favorite from the Raimiverse, JK Simmons as J.Jonah Jameson (See Spider-Man Far from Home's mid credits!) Unfortunately, Tobey McGuire will not return as the iconic Webslinger since Tom Holland is slated for a 5th outing.
Dr. Octopus is rated for being one of the top favorite Supervillians of cinema thanks to Molina's impressive acting that makes a reviled villain, also sympathetic due to his tragic loss and redemption.
Originally a rumor but now, !!!FACT!!! after Molina was discovered on the set. Now how is all this possible, since Jamie Foxx will also reappear as Amazing Spider-Man 2's Electro??
Easy answer! Now that Sam Raimi is focusing on the Doctor Strange sequel, Doctor Strange in the Multiverse of Madness,  both villains and possibly other supporting characters and even "Spider-Men '' from the previous Spider-Man films may show up.
Sure we watched as Otto made his grand exit via falling into the fusion contaminated lake, or Max Dillon "burnout", however,  in the case of Doctor Strange also showing up in Spidey 3 with an emphasis on alternate dimensions,  anything is possible!
One stipulation, as long as the ridiculous "One More Day" storyline isn't implemented as part of the sequel’s narrative,  this is interesting news!
Also see: Into the Spider-Verse and checkout Spider-Man Shattered Dimensions available on PS3 and Xbox 360!
Doctor Octopus Doctor Strange Pop Topix Sam Raimi Spider-Man