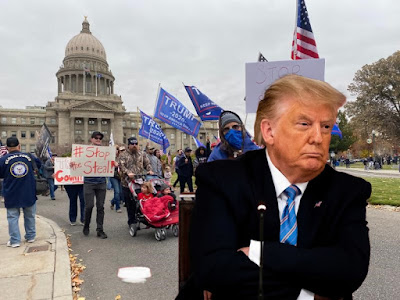 Ah, November my favorite time of the month! Well for the most part anyway.
I usually associate this time of the year with cool Autumn weather, feasting, another Call of Duty release and new gaming systems....well, that's  if you can find one due to scarcity issues!! Damn you overpopulated humans!🤪
But what November, is also known for is the Presidential elections where we American citizens extol our constitutional rights by deciding who stays or who goes. Kinda like NBC's "The Apprentice".  Hahahah!
As I hoped, as I predicted, and as I knew it would come to fruition, President Evil, has lost his bid for the Whitehouse and he's not happy about it at all. And like the petulant child he is, El Cheeto refuses to concede on counts of the election being "rigged"!
What's problematic is that his enablers meaning, his fat flunky Attorney General William Barr, that closeted homosexual Lindsey Graham Craka, Fruity Giuliani, Bitch McConnell and a few others are not only contesting the results, but making it difficult for Biden's transition and well, "Let them fight"!
After the electoral results, i feel satisfaction that the Donald Trump will be out of a job and even better, his cult hivemind followers are even more pissed and bitter! And I say, good!
I had former associates from the Supernaughts and Shadowdojo, gloat and make derogatory comments toward me. Ah, the convenience of attacking behind a keyboard anonymously of course, like most cowards do, but that's alright because now, you fuckers lost, and lost "Bigly"!

Personally,  I am not of fan of Joe Biden nor Kamala Harris because of they also have blood on their ledgers.
However, However...! Biden's victory although no landslide,  was fair and square. The American people have spoken and Trump has lost both the Popular vote and the electoral college.
Aside from Trump being this accelerator for emboldened White Supremacists within an already racist nation, his mishandling of the novel Coronavirus pandemic (which caused the deaths of so many Americans.) among a few other fuckups has caught up with him and its long overdue.
The Trumptards are taking to other Social Media forums and safe spaces where they belong. As of this writing,  they are planning to assemble in Washington DC to protest Biden's victory. "Stop the Steal" Million MAGA Mayo March?😉 Funny, how those White Supremacists stole the idea from Minister Farakhan's Million Man March back in 1995. How "original" of those rubes and retards. 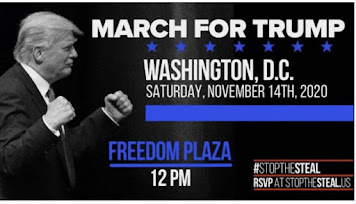 It doesn't matter at this point. They can wave all the flags, in a sea of red caps but it won't make a damn difference. Just another superspreader event and if they can infect each other and die off like flies, good! Let the cleansing of the gene pool, begin while I sit back popping that popcorn 🍿
Look,it's of no shock that Trump is planning his last ditch efforts for revenge and relevancy while using his cronies like Roger Stone, Alex Jones and a few other rejects from Batman's Rogues Gallery to take advantage of White Trash and a few Uncle Toms. Business as usual.
Now, as for those hypocrites on the Left news media like CNN,  who were quick to mention how Black Women saved Joe Biden from losing to Trump, well that may or may not be true due to rhetoric of demonizing African-American Males, I can't fault the Black men who sat this election out because of "Biden's Law " that harshly punished blacks for possesion of illegal substance, while the upper class i.e. Hunter Biden, never served an ounce of prison time, for doing ounces of cocaine.
Off topic, why was CNN correspondent Van Jones crying like some Contestant that won in some Miss America pageant?
America and double standards go together like Baseball and Apple pie!
Let Black people continue to hold Biden accountable for harsh prison sentences and extending the Thug Hoidrat culture. Meanwhile,  Trump leaving office is the best news since the deaths of Roger Ailes, Jerry Heller and Antonio Scalia. And speaking of Scalua, Zero fucks are given for his best traveling buddy, Ruth Bader Ginsburg who called NFL athletes "stupid and dumb " for kneeling and protesting racial injustices. No loss there other than Trump appointing a new Supreme Court Judge. Who is suspect as with Kavanaugh and when  Women lose their reproductive rights, you can take it up with the 55 percent of White Women who voted against their own interests.
Trump's empty headed followers are still capeing for him, regardless of what he has done, or didn't do. Are they ashamed of how they fell for the trick bag? Perhaps.
So now with this shitead charlatan is planning on distributing the Covid vaccine everywhere except for New York.  America, this is, or soon to be was your President!
Ah, with Coronavirus (deaths withstanding of course.) and racial unrest serving as a  catalyst for Trump being kicked out, to paraphrase the Joker; "Sometimes you gotta break a few eggs to make an omelet ".
And now its breakfast time, and i'm hungry! nom, nom, nom!😛🥚🧈🥞 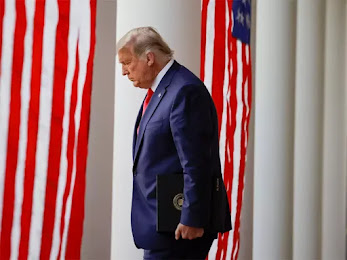