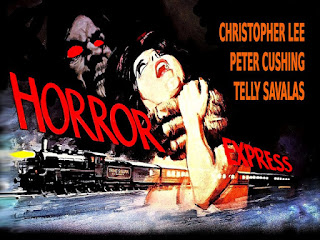 Lee and Cushing back together!! Kojak the Cossack! Aliens! Zombies! And all this took place on a Train!!

In this low budgeted spanish production, Director Eugenio Martin recruits two of Hammer's most iconic thespians' Peter Cushing and Dracula himself, Christopher Lee for this period piece sci fi horror tale that begins with Scientist Professor Alexander Saxton (Lee) narrating the discovery of a frozen prehistoric body during his expedition in Manchuria, China with Saxton taking accountability of  the events  that have occurred within the Trans-Siberian express. 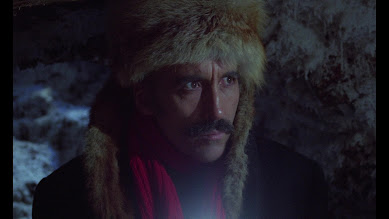 "The following report to the Royal Geological Society by the undersigned, Alexander Saxton, is a true and faithful account of events that befell the Society's expedition in Manchuria. As the leader of the expedition, I must accept responsibility for its ending in disaster, but I leave to the judgement of the honorable members of the Society the decision as to where the blame for the catastrophe lies." 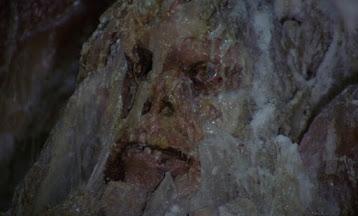 The fossil specimen believed to be the Missing Link, is boarded onto the train to England for scientific observation. However, there are a few passengers who are very curious about the crate's mysterious contents to the extent of loosening it. And in turn, the creature  escapes and terrorizes the  train's passengers! Known mostly for his work as Dracula, Christopher Lee goes against type, by portraying herouc protagonist, adventurer and scientist Saxton, who is  staunch,arrogant and pompous at times, while Peter Cushing's Dr. Weir, is a mild mannered rival to Alexander, who then forges a partnership after the creature begins leaving a trail of white eyed bodies throughout the cars. Rounding out the eclectic cast of passengers and potential suspects; ie Chess playing Engineer, a Russian Police Inspector,  two Polish nobles, Weir’s poultry female assistant Dr. Jones, a Zealot Monk, a “Secret Agent” and a Pre-Kojak Telly Savalas despite not appearing until the third act as Cossack leader, Captain Kazan (Sounds like a G.I.Joe villain.) who  chews up scenery, when intimidating the passengers.

Captain Kazan: Now, anything, anything that moves near that door, kill it!

Dr. Wells: But what if the monk is innocent?

Captain Kazan: Ahhh, we got *lots* of innocent monks!

Inspector Mirov: The two of you together. That's fine. But what if one of you is the monster? 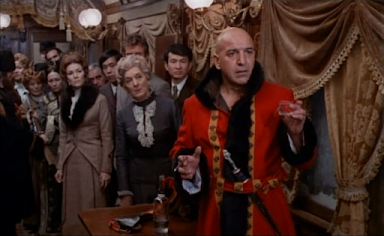 This film adds much needed material to support the narrative within its 90 minute mark. I admire the brief historical nods on how British Imperialism affected Poland or future technological advancements in rocket science to which our "visitor" plans to use this knowledge for his advantage. actor Albert de Mendoza who gives an amazing performance as the Raputen caricature Father Pujardov, who fanatically warns the passengers that the extraterrestrial is  Satan, who has descended onto the earth. Yet abandons his theonistic imperatives  after being mocked and rejected by the Count to suddenly embrace and pledge allegiance to the creature, who in turn, completely ignores the Monk’s presence. In my eyes, it's a subtle dig towards the religious fanatics, demonstrating how quick they can spin their narratives or even reject their faith whenever it suits their personal advantages. It was more than evident when the creature told the Countess Irina how much Pujardov loved her or at least lusted after her. 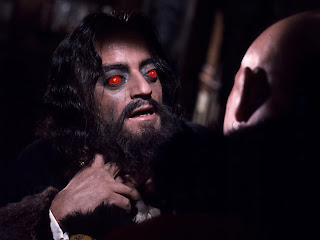 Horror Express is not just some paint-by-the numbers horror tale, as there were a modicum of mystery and espionage elements during a plot arc about a special alloy- stronger than diamond, that fits within the plot context for at least, two characters aboard the train.The creature's design looks to be a hybrid of a decomposed Bigfoot with Terminator's glowing red eye which can be used as a weapon whether its causing his victims to bleed and have their memory and logic drained or merely turning them into Zombies! 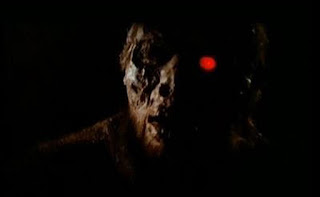 Aside from it's Murder on the Orient Express plotline, there were a few breaks of humor albeit nationalist.This classic is atmospheric and at times very scary. The plot, adequate soundtrack and the story itself, was ahead of its time. Not to mention, it was one of my favorite pairings of Cushing and Lee where they weren't playing as adversaries.it's a smart and sophisticated thriller that should be required for most self described fans of horror to invest in and another Euro-Horror film that is well deserving of Hammer status as it can be defined as unapologetically Hammer-esque. Horror Express was released through Belmar Productions, the same studio behind Psychomania. 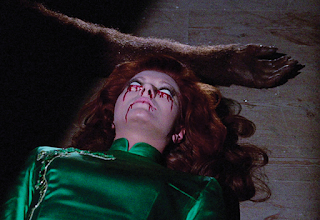 Remake this: While Horror Express is noted for its high concept, that may not may justify a remake. On its own merits, it is a self contained classic that should not risk a bastardized adaptation. Besides, it was influential enough to serve as a precursor to Swowpiercer and John Carpenter’s The Thing even though it was the second film inspired by John W. Campbell's "Who goes there" but it still has enough originality to stand on its own laurels, when you factor in a deceptive alien who  possess and kill humans, an Indiana Jones prototype, with the surviving passengers  questioning the contents of the crate and each other. 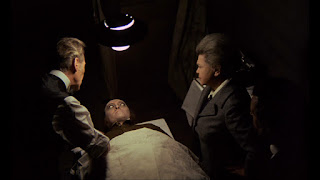 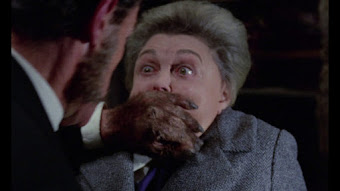 Now if there were plans for a remake, I'm sure there would be more emphasis on action and less suspense.Maybe Blumhouse can do something with this and if so, they should first cast Joaquin Phoenix for the part of Pujardov just don't title it "Thing on a Train"! Horror Express is available for rent on Amazon Video for only 99 cents as of this writing or purchase the Arrow Films Blu-ray which features a great 2k restoration with bonus features.