Triple Threat is a triple treat 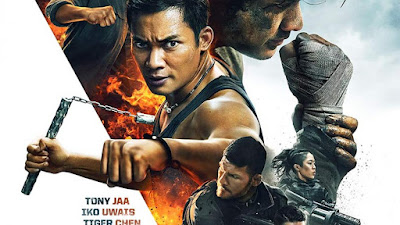 When 2019 started I was excited for only 1 thing and that was John Wick 3. Later Hobbs & Show arrived. And after that I found out about Triple Threat and it made me super excited. The line-up of Triple Threat was insane and it would probably be the best movie I will see this year. It would probably exceed at where the Expendables failed, i.e. make good use of the actors in it.

So let’s look at the line-up of Triple Threat. Iko Uwais from The Raid. Tony Jaa from The Protector (Tom Yuum Goong). Scott Adkins from Undisputed 2-4. Tiger Chen, of whom I never heard. Yeeja Janin, the woman who has more girl power in her pinky finger than Brie Larson has in her whole body. Michael Bisping, former UFC-fighter. And last but not least Michael Jai White.

That is a motherfucking badass line-up. Granted, you always wish for more like Marko Zaror, Van Damme, Mark Dacascos and Katheryn Winnick being added to the cast, but you can’t win them all. This line-up in itself is glorious. Anything an action movie afficionado like myself would dream about.

So what did I expect going into this movies? I expected all kinds of badass fights, but knew that not all combinations would be possible.

Did the fights deliver? Hell yeah, they did. Tiger Chen, for example, I never heard of him but the guy was awesome. Makes me wonder what else he did. Iko Uwais is my number one pick and he always delivers and so does Tony  Jaa who is my number 2 pick. Scott Adkins I was afraid about. I love his style, but how would he match up with the Uwais and Jaa? The answer is he fit right in. He brought his A-game against the masters Uwais and Jaa. Michael Jai White also doesn’t get enough respect and for the first time ever had the opportunity to cut loose and he delivers as well. Yeeya Janin got way too little time and that is a shame, but at least she was there. Michael Bisping, a UFC fighter, but not an actor didn’t do bad either. With the proper guidance he might turn into something good.

Tiger Chen and Tony Jaa were also funny. They played kind of a buddy movie roles.They should do more buddy movies together. Scott Adkins and Michael Bisping were absolute asshole characters in the movie. You wanted to see them get their asses kicked. Michael Jai White also turned on the bad guy and you wanted to see him get his ass kicked. Too. So good baddies, who are also martial arts actors. Where do I sign up?

There was even a small role by Dutch guy Ron Smoorenburg, who was handpicked by Jackie Chan for the movie Who Am I. Seems Ron built himself a small career since then. I didn’t even recognize him and that made it funny when I saw the end credits.

If this movie showcased anything is that all the people involved delivered. John Wick 3 has to step up big time. I have seen my martial arts movie of the year. I hope the people involved will team-up again in the future because I know they will deliver.