Welcome to now playing, where I review the recent films and TV shows now available via home streaming. (Netflix, Amazon,etc.)
This segment is dedicated to a few Superhero based programs now available for your viewing pleasure!

Ant-Man and the Wasp 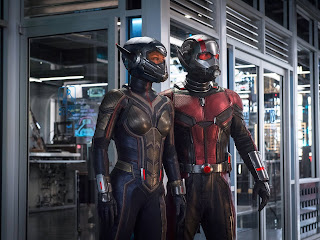 This anticipated sequel reunites actor Paul Rudd with the original cast from the first film with even more comedic bits and action. The titular character(s) face a new menace with the power to walk through walls...like her namesake; Ghost and is that a good thing?

Well, yes and no. While the action sequences especially from Wasp, delivers, the comedy felt forced as if Director Peyton was desperately trying to recapture that lightning in a bottle. Sadly, it only worked once and that was the previous film.

While Ghost being yet another villain to find empathy for, is now a tiring trope the idea of Hank Pym's "lab" being used as some McGuffin ala hot potato, is a result of one too many writers on board. (As in four!)

The soundtrack is very redundant if not plain ineffective and I just didn't care for the lame attempts of "humor". Well, at least the mid credits were good. 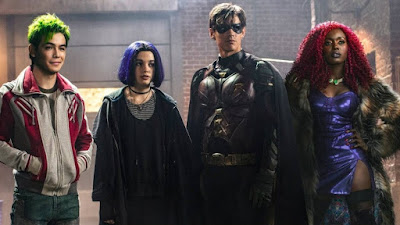 Okay, here's a new series developed by Akiva Goldsman, Greg Berlanti and DC's very own Geoff Johns exclusively for the CW...... What's this? DC now has their very own streaming service??

Ok, allow me to retort, in Titans which is made specifically for DC Universe's service, Dick Grayson aka Robin, joins forces with other well-known Superheroes from metahumans, a witch and even an alien?? To stop an underground cabal who plans to capture Raven and use her abilities for whatever.
Judging by the first two episodes, this series has taken a darker tone than its CW counterparts, the violence is intense, and the dialogue is laced with profanity to the extent of justifying a hard R rating!
It’s somewhat pretentious when striving to be "edgy" but it’s obvious that DC is trying to get those sweet Marvel/Netflix dollars.
Time will tell if Titans is worth further viewing and especially shelling out $9.00 a Month. 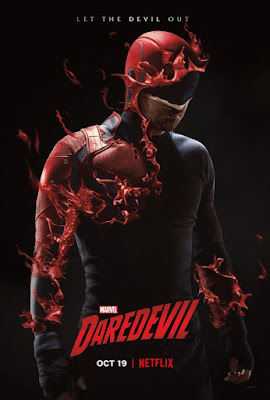 After 2 hugely successful seasons, the Man without fear is back but is the third time a charm? Unequivocally, yes! After the events of Netflix's Defenders, Matt has survived an underground explosion only to recover in of all places, a Catholic church!

But without some of his physicality and super sense, how can Murdock as Daredevil expose a Wilson Fisk's concocted scheme to frame him as a murderer while taking control of the criminal underworld?

Daredevil is full of different character arcs be it the supporting cast like Karen Page, Foggy Nelson, Wilson Fisk or the dangerous hired assassin Agent "Dex" Poindexter who gives Matty boy more trouble than he asked for!

The overall narrative focuses on faith, revenge and redemption.
Throughout this season, Matt unravels a few mysteries one more surprising than the other but many of you didn’t really come for any revelations. Daredevil is loaded with action, drama, suspense, pathos and of course your hallway fight tracking shot sequence! Highly recommended!

Now as a segue,

Not so sweet Christmas: Luke Cage has been cancelled!
(Rest In Power, man!) 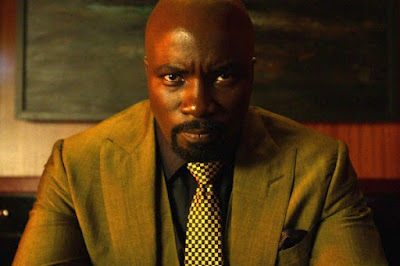 It comes to of no real surprise, that Netflix has pulled the plug on the under-performing Iron Fist series but what's even more shocking is that the popular streaming service decided to drop yet another Marvel based series.

Over the past weekend, it was announced that Netflix has no further plans to produce any further episodes of Luke Cage, citing "creative differences" as the main factor.

Could this be due to Marvel not getting paid enough for licensing their intellectual properties or the mere speculation that both Luke Cage and Iron Fist could be better utilized for Disney's upcoming streaming service which owns most of the Marvel library of films and television series. Or was it merely cancelled for budgetary reasons
despite the well-received reception of Season two?

So far Daredevil, The Punisher and Jessica Jones is still in the running and only time will tell whether these shows may be on the "chopping block".