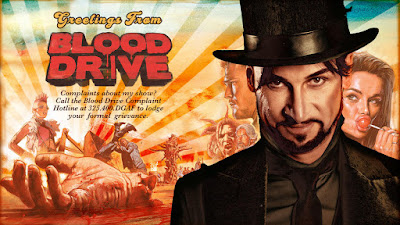 Sometimes TV shows or movies slip past your radar. It can take a while before you catch up. Often it is through recommendation by friends or by TV and movies sites. I was looking forward to sinking my teeth into a TV show, because all my favorite shows are not running any episodes at the moment. Blood Drive was a welcome addition!

What can I say about Blood Drive? Well, for the moment let's say SyFy took it to the extreme. They have become hardcore. Now, I don't remember if I watched much SyFy stuff in the past, but I was always under the impression it was not really my kind of TV station. I was never a big fan of sci fi stuff. Sure, there were a few exceptions like the original Battlestar Galactica or Buck Rogers but mostly it was never my kind of genre. I didn't feel it. That is why I was never interested in what SyFy had to offer.

Now Blood Drive... That is not sci-fi to me. The goal of this show seems to be to piss off as many people as they can. Nothing is sacred it seems. And that's what makes it kind of special. If you ask me what it is I would say it is a cross between Rob Zombie camera work, Rob Zombie characters, Mad Max, Evil Dead, Silent Hill, Grindhouse, Carmageddon and Deathrace 2000. The world of Blood Drive is a fucked-up world. It's bloody, violent, pessimistic, sadistic, gory, sick and it is full of debauchery and soulless people. I don't remember ever seeing a TV show like that and Syfy might still get into trouble and cancel it due to pressure from outside.

The story in short is that there is a race going on. The winner can earn 10 million dollars. The racers all have a bomb implanted in them that can go off if they misbehave or whatever. It is not clear who the organizers of the Blood Drive are. Their master of ceremonies is the face of the race, but who the puppet master exactly is we don't know. One thing I do know is that the cars don't run on fuel. They run on blood. They need to be fed So you can imagine there will be some deaths.


All eyes seem to be focused on Christina Ochoa. They want her to be the star and she looks okay and she has a certain anger and mean streak in her.


However, the star of the show is Colin Cunningham. I never heard of the motherfucker, but his Julian Slink is one of the best bad guys ever in a TV show. He is the master of ceremonies of the races. The man oozes evil and he calls himself an assassin. He wasn't shown assassinating people, but the man is more armed than you think and could kill you in an instant. And he is a manipulative bastard. Definitely one of the evillest motherfuckers you will see in a TV show. He chews up every scene he is in.


Sometimes the show takes itself too seriously, but the real fun is in the nasty world that it portrays. And some things in the show are a metaphor of today's society.
Best show of the year for me by far. Yes, they steal from a lot of things, but have created a fucked-up world. I just hope this show doesn't start a lot of copycats trying to cash in.

Trivia:
SyFy cancelled Blood Drive after one season. I guess all the complaints from the soft people couldn’t deal with the vibe of the show. It is a shame, because the characters in it were very good. Colin Conningham, however, was excellent. In one season he managed to create one of the best and evil characters in TV and movie history. For that alone Blood Drive should be watched, even if it lasted just one season and it had an open ending. Blood Drive has become cult with a capital C.
A must see show if you want to see something different.