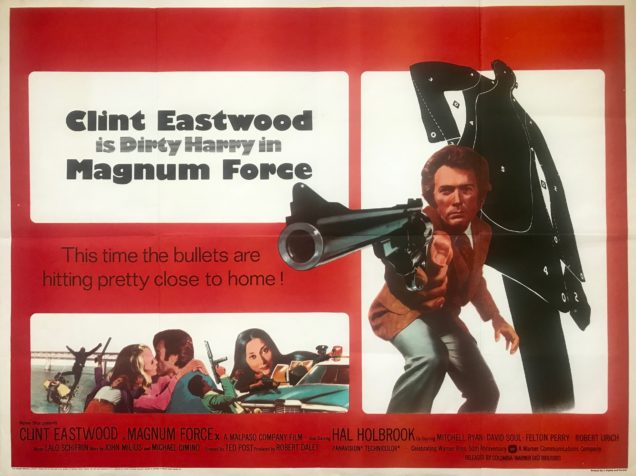 What happens when the Police decides to uphold the law within their own hands? Written by John Milius (Conan the Barbarian, Red Dawn) Michael Ciminio (The Good Hunter) and directed by Ted Post, the 1973 Dirty Harry sequel Magnum Force with Clint Eastwood reprising his role as Harry Calahan (Dirty Harry”) investigates a string of murders enacted via death squad who gives a whole new meaning to “serve and protect”.

Unlike the first film, there is no picturesque scenery of San Francisco during the intro. Instead, we are treated to an unusual but snazzy score, a bizarre chorus (Courtesy of Composer Lilo Schifrin) with a hand firmly holding a 44 Magnum pistol followed by an all too familiar line that was said during the first film;

“This is a 44. Magnum, the most powerful handgun in the world, and it could blow your head clean off.  Do you feel lucky?”

The movie begins when a Mob boss Carmine Ricca, is acquitted of the murders of some labor disputer and his family. After exiting the court, Ricca is ambushed by a few supports cheering him on (As in a certain notorious Mafia celebrity who managed to beat the rap for a while) along with plenty of his detractors.

And as karma would have it, Ricca, his shady lawyer and his goons are gunned down during what may seem to be a “routine” traffic violation. But it doesn’t end there, as what is presumed as the same Police Officer goes on a killing spree starting with infamous Criminals working his way down to Pimps and Hustlers without ramifications. Harry arrives at the crime scene along with his new partner Early Smith (Felton Perry of Robocop) and is immediately chastised by his commanding officer Lt.Briggs for being at the crime scene investigation when he was busted from homicide to stakeout.

It’s interesting to note how Briggs’ cryptic comments were made after a few murders which would give the viewer the impression that there is more to this “fine, upstanding Police Officer.”

Despite being touted as a mystery or conspiracy tale, the core of this sequel, is still an action crime thriller that doesn’t bore thanks in part to sporicidal breaks of gunfights starting with a scene that entails both Harry and Early having lunch an ex Homicide Cop's Snack Shop located near the airport. A Passenger planes is suddenly hijacked by two thugs who request an international Flight Captain for a more secure extraction out of the United States- and with the FBI nowhere in sight, guess who volunteers as the pilot?

Then there’s the Supermarket stakeout scene that threw political correctness out the window the second I heard; “Right here is where I kill me a Nigger”! Ah, the good ol’  political incorrectness of the seventies! It's good to know that Early didn't back down when the racist prick said "suck it"!

While Harry isn’t taking out hoods and other criminals, we get to see the mysterious Traffic cop assassin gunning down high-ranking mob bosses along with their associates be it a pool party or an upscale Penthouse. Oh, and there’s plenty of room for others to get the receiving end of justice...

“People are guilty until proven... I mean... goddamnit, you know what I mean”.

After following through a what appears to be a crime scene investigation, Harry deduces that the Pimp killed on a highway was murdered by a Traffic Cop as in Officer Charlie McCoy however, his theories are shot down *ahem* after Callahan learns what happened to his close friend.

One of the biggest controversies of Magnum Force, was the infamous “Drano” scene in which a notorious Pimp (Played by Albert Popwell, his second appearance within a Dirty Harry film) murders one of his whores via pouring Drano down her through. Not only was said scene sadistic, but it inspired a pair of copycat killers to imitate that same act. Harry’s inquiry of who is responsible for these vigilante murders lead him and into a trail of intrigue and danger staring with this pivotal scene which well defines both the story and the Antihero’s courage of conviction. Even Inspector Harry knows his limitations.

It’s interesting of note that while discussing the comradely between the four Rookie Police officers, Early mentions how “they stick together like flypaper, you know”? And that “Everybody thought they were queer for each other”.  Harry then disregards the rumors with; “Let me tell you something. If the rest of you could shoot like them, I wouldn't care if the whole damn department was queer”. Harry’s acceptance of alleged homosexuals on the force was a speculation of his progressive political stance. This isn't the only "stance" Callahan takes up, the most pivitol scene goes to this confrontation where there's not only a shocking revelation, but a testament of Harry's moral compass!

Director Ted Post delivers spectacular very impressive cinematographic angles for that era- which enriched dramatic storytelling most notable was the officer’s approaching Ricca’s Cadillac, reflection from sunglasses, a third person perspective of Harry engaging in a gunfight at the supermarket and an enclosed bird’s eye view of Callahan and Briggs within a confined ballistics room.

"Briggs, I hate the damn system, but until someone comes along with changes that make sense, I'll stick with it."

This sequel, in my opinion, is the best of the Dirty Harry series. It serves as not only as an explanatory and cautious tale of how far is too far with themes of vigilantism but equally important the finger pointing of the judiciary system and due process or lack thereof. Also, of note, I would like to point out one scene where Callahan rationalizes his findings with Smith and while doing so mentions that there may be “a Sub-organization within the police force”.  Although far-fetched, one has to ponder if such as sub-organization actually exist in the real world especially when you tally all the recent unjustified police shootings of unarmed civilians. At least the vigilante officers’ actions although a bit extreme, targeted criminal who thought they were real menaces to society as opposed to murdering an individual because of his or her racial identity. While there are many police officers who are law abiding and do not overstep their boundaries, there are many individuals from a White Supremacist organization that has infiltrated the Police force ergo, the explanation of  killing unarmed black civilians to the point that these theories are no longer far fetched!

Part action, part suspense thriller and even fragments of humor mostly due to Callahan’s condescending dialog and those memorable verbal exchanges with Lieutenant Briggs! Can’t neglect to mention other highlights I.e. Early’s reactions from the cop's description of Ricca's murder and an annoying neighbor who happens to show up while Harry is attempting to disarm a bomb. And speaking of neighbors, well... 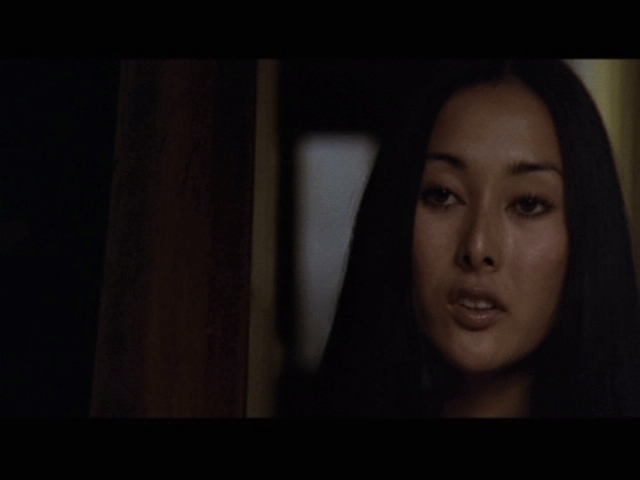 As a ritual, I find myself watching MF once a year and still enjoy it immensely. For a forty-year plus film, it’s very topical and still stands the test of time when it comes to the current climate of Police corruption. If you want an exceptional Cop thriller without all the pretensions, you can’t go wrong with Magnum Force. And let it be said how MF helped to springboard the careers of noted actors Tim Matheson, Rober Urich, a naked Suzanne Sommers and  David Soul of Starsky and Hutch fame.

Magnum Force as well as a few other Dirty Harry films are available on video streaming services however, I recommend owning the Blu-Ray available on Amazon for dirt cheap. The visual and sound quality has its share of noticeable blurs every now and then, But for the low price, its serviceable.