Disclaimer:  The views and opinions expressed therein are those of Sky and Ollie and do not necessarily represent official policy or position of Poptic Nerve.

Sky: Hullo World, it seems that after a long hiatus, me and my ahem, "esteemed" cohost, Ollie is back for yet another yearly retrospective and recollections.

Ollie: Aye fooker, it’s been long overdue and now that we're free of our contract, we don't have to comply with anybody's rules or edicts. Oh, that was during Pulp Epic.

And speaking of dead sites, allow me to pour a few for our old friends at both Supernaughts and TMWSM.

Despite his lackluster efforts, ol Scotty couldn't get it up and running in time just when AICN's demographic was slipping faster than a lubricated condom. That's when the Englishman Stewart aka "Da Man who saved Movies" took on the migration and boy did he regret it!

Sky: Ah, Stu had such a humble place in the beginning and then came the great flood! And with a rush of water, there happened to be a lil sewage in the mix. Oh, and a bit of hubris from the owner’s part.

And what about Pop Axis?

Ollie: What about them? Like a one-night stand, they came and went.
Well, at least the site's owner can now put his money on Netflix instead of paying for a site that ultimately failed via silly shenanigans. Oh, and the has been who's no longer "Greeeeaaat" should stick to playing "Mr.Mom" since his career in voice acting may not have turned out well.

Well, look at it this way, at least WE don't have to read silly cryptic comments from a pseudo dojo. That “place” was on the “way” out. Also, collaborate with a certain drunk, belligerent, short, fugly, douchebag who writes poetry, very BADLY! And let's not forget-racist! Nothing new.

Sky: Buauhuhhua, sure you're not referring to you, Ols? Sounds like you have a bit of  "anger at the end of the world"  It's unfortunate that some trolls had to spoil the party, and speaking of which, there's always work at that Goblin site.

Ollie: Pffft! The only thing I like that's "Green", is my beer on St. Paddy's day!

Sky: Well the owner is practically a Neo Nazi and from what I heard, a Mexican who voted for Donald J. Trump. How's that for contradictory?

Sky: With that being said, there were quite a few interesting events and wackiness throughout the year of 2017, ergo, we have an inline awards ceremony dedicated to certain nominees, today I present the 1st annual Ollie awards otherwise known as the "Ollies"!

Well named after a crazy, obnoxious bastard like you.

Ollie: To quote Kurt Russell; "yeah, well fuck you too"!

Sky: Good ol Libertarian Kurt. What's he been up to these days?

Sky: Ah yes, one is an imaginary figure bringing all kinds of gifts and joys to the world and the other one is Santa.

*Audience laughs and some boo*

Announcer: Annnd with that being said, let's get on to our nominees o rather, "winners" of the so called Ollies! These categories
are exclusively based on original content aired on of all things-YouTube!

Sky: For this award, it’s a tie! One for that narcissist Baby Daddy slash "Actor" Tyrese Gibson for his silly antics during a court custody battle with his ex who is taking his ass to the cleaners and the other, Chris Cantwell, a tough talking White Supremacist who prior to the event at Charlottesville, VA, brandished his assortment of firearms.


You know, to compensate for his manhood as in lack thereof. After learning that the local authorities are seeking him for his part in the tragic incident during the Blood and Soil rally, Cantwell recorded himself crying like a pussy.

Ollie: Meh, no matter who wins we both lose! But "Cuntwell" is the bigger bitch and in a way, ya can't blame him. I mean imagine if they put his sorry ass in Gen Pop. Bubba, Tyrone, Pooky and Ray-Ray will pass him around like a video rental.

Sky: Ollie, there's no such thing as physical Video rentals anymore, everything's all about Streaming!!

Sky: As of recent, YouTube has cracked down on the partnership program due to complaints of content creators producing shoddy videos yet making a profit. Ergo, the "Bad Actors" title.

In this case, the winner of the "Bad Actor Ollie" award goes to ..

Ollie: Hahahahahah! So, I wonder who's the clown underneath the mask? Any-one-in-particular?
Shhhs, keep it down, only a few 20 or so these individuals are aware of the "Phantasman"!! *Wink*
But man was this some poor method acting, so much for his dreams of having his own show.

Sky: Poor Dee had to put on a straight face throughout this silly shtick. It's no wonder why he lost his bloody mind with "Asigate" and such.

Oh, while we're on the subject, Phantasman that is, here's a never before seen clip that was supposed to have been the original intro!

Sky: No, Wendy Williams! You seen the mug on her?

*Audience boos*
*Then laughs and applause*

Sky: Ah, the power of social media!It has the great potential to inform or educate the masses where the mainstream media and even the public-school system cannot.
In this category, we have a little shit who "cried wolf" via social media only for both him and his parents to be exposed as White Supremacists!

To Keaton Jones, this "Fraud award" goes to you!

Ollie: Y'know, for a time, that shit worked in his favor! Not only did he gain sympathy from the public, but even celebrities like Mark Ruffalo and Chris Evans. Yes Hulk and Captain America felt bad for him and offered him tickets for the World premiere of the upcoming Infinity War movie!!

However, it took one obscure UFC fighter to expose those fraudulent fucks.

Sky: Well now that he has been exposed as a fraud, perhaps that's the end of his prospects in Hollyweird.

Ollie: No Sky, not quite!
There's always a spot for him for yet another horror movie remake.. 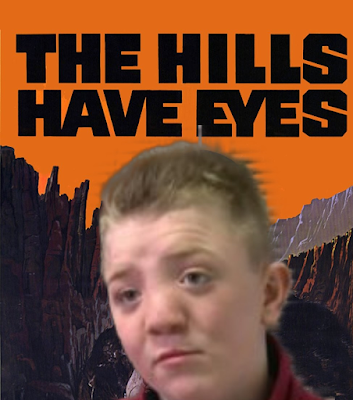 Sky: Oh, You bloody went there! While on the subject of racism, here's an honorable award courtesy of the staff at  Popticnerve.com! Roll em!

Now, here's the "Ouch, I fucked up bigly Ollie" I present to you, Logan Paul!
The YouTube sensation of 2017 who got too cocky that while in Japan, made fun of some guy's corpse in a forest notoriously known for suicides!

Paul had the hubris to post his video in YouTube and rightfully so, caught the ire and wrath of both subscribers and the general public.

So Logan, this one's for you, ya lil effeminate looking fuckboy!

Ollie: I doubt his career is over with, as a matter of fact, he might show up in any of the future Marvel Cinematic universe films for all we know.

Sky: Him as in himself?

Sky: Annnnnd for our next category, the "I got my ass checked Ollie"

This goes out to the dumb belligerent creep who spewed racial slurs while harassing others during a train ride.

Ollie: Lemme guess, he said the magic word, as in the N-Word?

Let’s find out shall we?

Ollie: Yup, that'll get you hurt.

Sky: Perhaps, but why do some Blacks still use that word, despite its very ugly place in American history?

Ollie: They taking ownership, I guess?

Sky: That's a lame excuse. Where in the bloody hell did you get that from?

Sky: Lord..well, I guess that wraps it up for this Year's Ollies but we can't  leave without giving a posthumous shoutout to the late Auntie Fea who passed on to pearly grits coloured gates of Heaven.

Ollie: Such a down to earth woman, she'll be missed. So, what are the chances of Paula Dean kicking the batter bucket?

Sky: *Ahem* Not likely. Before we close out, some special thanks goes out to all the content creators who went through the hardship, redtape and risk of copyright infringement to produce the materials shown here.

YouTube is a great way to demonstrate one's talents, ambitions and even leading toward instant stardom. However, as of recent, the content creators are faced with strict regulations and policies that can adversely affect said creators from achieving their dreams or make some money on the side. That's after Uncle Sam gets his share.

Please support your favorite start-up channels that provide you with entertainment, informative news and pop culture topics that the big networks don't care to address because they're in the pockets of major corporations and sponsors-like-Youtube is now......anyway, thanks and good night everybody!!!