Showing posts from January, 2018
Show all

The year 2017 will be often remembered for the current sexual scandals and corruption within the current administration, but aside from those topics, there were a few gems that stood out when it comes to pop culture. And these are my personal choices of 2017's highlights thus I give you.. Best of 2017! LOGAN Starring: Hugh Jackman, Patrick Stewart, Richard E. Grant and Dafne Keen. Written and Directed by James Mangold   After 20 years of portraying the infamous, yet iconic Mutant Antihero, from previous X-Men film franchise, Hugh Jackman takes his final bow as Wolverine Aka Logan. But is Logan a worthy swansong or a swan dive? Instead of going the alternate timeline continuum often associated in the First Class series, Logan remains as a true successor to the original X-Men films which began 17 years ago. The story takes place in the Year 2029 were most of Mutantkind have been practically extinct due to a catastrophe called The Westchester Incident. The titular ch
Post a Comment
Read more

Directed by Taika Waititi Previously, after watching the trailer for Ragnarok, I was excited to see Marvel/Disney's sequel to the iconic Asgardian and Marvel's answer to DC's Superman. However, after learning of constant critiques of the film, I decided to put it on the "waitlist" and now that I have finally watched it over the weekend, here are my thoughts for this Johnny-come-lately review.   If I had a hammer.... During the beginning of the film, Thor is held captive by Surtur within Muspelheim while searching for the Infinity Stones. Thor of course, escapes and sometime afterwards, learns of both the prophecy of Ragnarok which spells the destruction of Asgard and even worse, Hela The Goddess of Death, has been released from prison and she ain't too happy about it and tries to overthrow the kingdom. Of course, The God of Thunder is not having it, and sometime after his brief encounter with Hela, Thor is captured, finds himself
Post a Comment
Read more

As of recent, that well-acquainted medium known as Television has garner a tremendous amount of momentum to the extent of giving Movies a run for its money. The competition has gone intense with highly acclaimed shows such as Game of Thrones, The Walking Dead and these examples are just from Cable Network television! Now that streaming services like Hulu, Amazon and of course Netflix has entered the ring with quality original programming, who really need to schlep to the local theater? TV is here to stay! Here are my personal picks of 2017 in television be it series, one shot specials or even movies!  If it’s made for the TV platform, you'll find 'em here! The Punisher (Available through Netflix) Where other Marvel based Netflix programs such as Iron Fist and The Defenders failed expectations, the latest entry featuring the titular Avenging angel of death, delivers! With a major conspiracy angle being the center of the narrative, Mar
Post a Comment
Read more

After the success of Netflix's Luke Cage series, DC has decided to throw their hat into the ring with their very own Black Superhero TV series. I have to say, that this series is unlike any other Superhero program whether it's  the previous offerings from DC or Marvel/Netflix! Based on the obscure DC Comics from 1977, Black Lightning is centered around its titular  protagonist, Jefferson "Jeff" Pierce- a  Superhero with electrifying  powers who turned in his life of crime-fighting in exchange for a gig as a Principal at of all places, "Suicide City"! I presume that's CW's version of Southside Chicago or as it's often referred to as Chiraq. Pierce is a man who strive to help the community and reunite with his wife and two daughters. But after learning of  his daughters being kidnapped and held up in a Motel to get pimped by a group of hardcore gangstas, Jefferson is once again, forced into the life! Black Lightning is the
Post a Comment
Read more

Star Wars: The Last Jedi The Good, The Bad and the F#%&ing absurdity of it all!

Minor spoilers ahead so tread lightly when reading! So, after waiting for over two years, the follow-up to 2015's The Force Awakens is finally here! Now here is a breif synopsis and my summaries of this hotly anticipated sequel:  After the usual intro crawl, the Resistance are under attack by the imperial fleet of the First Order. Leading the charge is General Hux who is more generic than the last movie brings forward his Dreadnought battleship, however Resistance pilot Poe Dameron (played by Oscar Issac) goes against General Leia's commands by going in via a daring assault on Hux's Dreadnought . Personally, I thought this movie seemed to be on track, despite a silly communication exchange between Poe and Hux. Said scene came off as some callback to those parody films that claim to be legitimate comedies. Despite Poe's heroic actions, he is held accountable for his reckless behavior regardless if whether or not he saved the day
Post a Comment
Read more

With the Academy of motion picture arts and sciences slated to announce the nominations for best films, actors and of course, actresses of 2017 very soon, I thought I'd offer my own predictions of what would or rather, should be mentioned for this year's Oscars! For best Director: Denis Villeneuve ( Blade Runner 2049 ) Jordan Peele ( Get Out ) In his directorial debut, Peele nails it in the socially conscious thriller that is both Hitchcock and at times, humorous. Get Out is not preachy or rife with cliches and that is why its conclusion is different than what one might suspect. Props, Mr.Peele! Taylor Sheridan ( Wind River ) In this haunting whodunit inspired by actual events, Sheridan delivers a slow paced yet effective tale encompassing picturesque snowy mountains and treacherous landscapes. This Writer and Director brings out one of the best performances in both Jeremy Renner and Elizabeth Olsen. Guillermo Del
Post a Comment
Read more

Rank and File: G.I.Joe Animated! (From worst to best!) 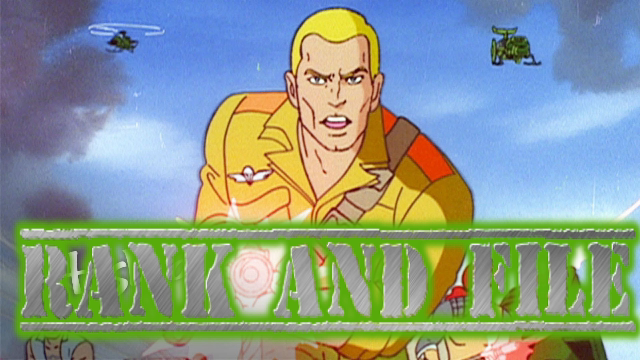 "He'll fight for freedom whenever there's trouble", you can bet your ass, G.I.Joe is there! And not as just an action figure line, but also in other mediums like say, comics, films and mostly, animation! What started out as a intention and sole purpose to market and promote the reimagined toyline; A Real American Hero, has become a pop culture staple and the most popular of Hasbro's signature product. So, in honor of its 35th anniversary which passed of this writing, I'm dedicating this segment of “Rank and File" toward the past animated series of G.I.Joe.  Rank and file, meaning me listing the worse to the absolute best! 7 . G.I.Joe  1990 (DIC) After G.I.Joe the movie came and went, Hasbro decided not to pay for any more episodes produced by Marvel Productions. Y'know, the animation studio that helped to launch the success of the ARAH. Anyway, the series is the worst of the G.I.Joe franchise with poor quality animati
Post a Comment
Read more
More posts