The year 2017 will be often remembered for the current sexual scandals and corruption within the current administration, but aside from those topics, there were a few gems that stood out when it comes to pop culture. And these are my personal choices of 2017's highlights thus I give you..

After 20 years of portraying the infamous, yet iconic Mutant Antihero, from previous X-Men film franchise, Hugh Jackman takes his final bow as Wolverine Aka Logan. But is Logan a worthy swansong or a swan dive? Instead of going the alternate timeline continuum often associated in the First Class series, Logan remains as a true successor to the original X-Men films which began 17 years ago. The story takes place in the Year 2029 were most of Mutantkind have been practically extinct due to a catastrophe called The Westchester Incident. The titular character has not only aged, but he's half the man he used to be. It seems that Logan is suffering from some debilitating condition as we see him at times, coughing up blood and there's the speculation of his diminished healing factor. Could this be due to the Adamantium poisoning after carrying the alloy in his skeleton for so many years or some rare form of Cancer?

That said, at least he still sports his signature trademark and weapon of choice-Adamantium claws! Working as a chauffeur in order to provide care for an ailing Charles Xavier (Professor X) who, due to age, is not as robust as he was decades ago in the X-Men's timeline in fact, the prof is stricken by both Alzheimer's, grief and guilt which later on we discover why via a shocking revelation of the Westchester Incident that would explain what happened to the old Mutants. While visiting the graves of a few old friend, Logan is approached by a Nurse-Gabriella who is a whistleblower exposing the creation of "artificial" Mutants located in a Cancer treatment center Transigen serving as an affront to Biological research facility used to create a breed of New Mutants. Gabby pleads Logan to escort her young daughter Laura to a sanctuary located in North Dakota called Eden.

At first, Logan refuses but thanks to a certain event, has a change of heart and because of his decision, he along with Laura and the Prof are being pursued by The Reavers (Cybernetically enhanced hunters also from the X-Men comics during the Marc Silvestri run.)

I couldn't help but notice the all-too familiar references that seemed from films such as; The Road Warrior, Firestarter, Terminator, Village of the Damned, Lone Wolf and Cub to name a few. There's even the inside reference to the classic western Shane, that has been implemented within the narrative. (Logan the reluctant hero puts on his spurs for one last Gunfight.) Despite the story's bleak outlook, there were a handful of comedic breaks to balance out the melancholy and the timing works! Richard E. Grant (Warlock) was cast as the part of the typical mad scientist Dr. Richard Vice whose role is responsible for the synthetic Mutants or even worse, the so-called revelation of the Old Mutants.

And speaking of which, I must give a big shout out to the actress Dafne Keen who delivers an eXcellent performance as Laura (Who I'm sure most of you know who she really is and if not, turn in your Geek cred card!) she's ferocious, yet compassionate and there were moments in which you can see the childlike innocence struggle to break through her mute, yet feral persona as you guessed it-X-23! Daf is truly the breakout star in this sequel and hopefully she'll land bigger and better roles within the near future. I can see her making a brief appearance in Netflix's Stranger Things or even a live action adaptation of Battle Girl Alita or Elfen Lied.

There were scenarios throughout the film that may or may not reflect today's social commentary be it the immigration plight, (Fleeing to Eden mirrors the current migration to Canada now that Donald J. Trump is POTUS.) Government intervention, disillusionment, war profiteering, corporate greed, the Underground Railroad, GMOs, Big Pharma and that's just scratching the surface when it comes to apt metaphors and theories.

Overall, Logan is one of best X-Men films I have seen as of late. It's brutal, unapologetic and guaranteed to tug a heart string or two unless you're a soulless bastid! :P Logan is rated R and rightfully so thanks to violent scenes disembowelment, blood, splattered entrails, body parts here and there that's almost up there with Rambo (2008) there is enough coarse language to go around. Jackman really lets loose compared to the sanitary X-Men films of old. Shit, even Patrick Stewart has his share of F-bombs when reprising his role as founder of mentor of the X-Men, the pairing of both Jackman and Stewart at times, felt as if I was watching some road buddy comedy.

Thanks to the great chemistry between the two X=thespians still after all these years. There's a copious amount of action and while there is no true sense of nuance to be found, the sequel is more organic with a Western vibe and more impact than the previous X-Men Age of Apocalypse. There were a few uses of cinematography that at times, reminded me of Nicholas Rfren's works. I personally rate this sequel "R" as in redemption. For not only having a simple yet emotionally charged narrative, but also redeeming the failing franchise and the director Mangold himself. Note: There has been speculation that the ending may possibly lead to a new franchise that;s if  FOX still manages to hold onto the rights. In my opinion, Logan is a great send off to a legendary character! Four *Snikts* out of five! X marks the spot! 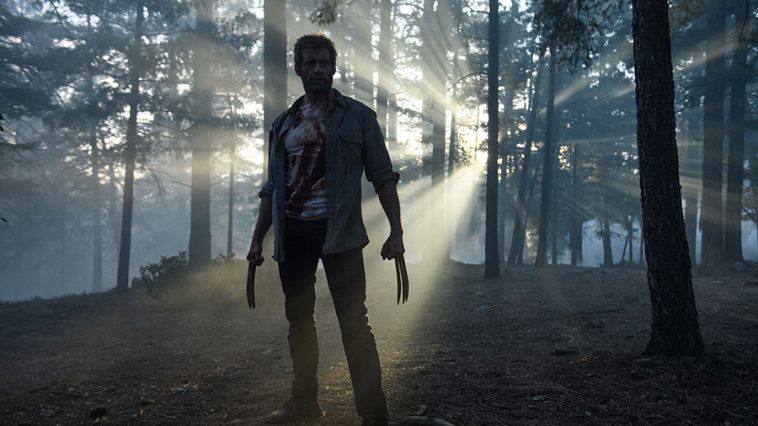 I didn't care for Superman's death or  when Quicksilver bit the bullet, laughed when the Hulk fell to his death from 200 feet drop, nor flinched after Jean Grey died twice but this film surprisingly hit me  in the chest when I least expected. Logan  is nominated for best adapted screenplay and it's a first for  a Superhero film. Congrats and well deserved!
Best of 2017 Logan Marvel X-Men