Star Wars: The Last Jedi The Good, The Bad and the F#%&ing absurdity of it all!

Minor spoilers ahead so tread lightly when reading!

So, after waiting for over two years, the follow-up to 2015's The Force Awakens is finally here!

Now here is a breif synopsis and my summaries of this hotly anticipated sequel:

After the usual intro crawl, the Resistance are under attack by the imperial fleet of the First Order.
Leading the charge is General Hux who is more generic than the last movie brings forward his Dreadnought battleship, however Resistance pilot Poe Dameron (played by Oscar Issac) goes against General Leia's commands by going in via a daring assault on Hux's Dreadnought . 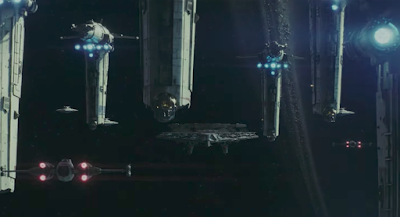 Personally, I thought this movie seemed to be on track, despite a silly communication exchange between Poe and Hux. Said scene came off as some callback to those parody films that claim to be legitimate comedies. Despite Poe's heroic actions, he is held accountable for his reckless behavior regardless if whether or not he saved the day.

Aside from that gripe, we finally get to see the physical appearance of the  new Galactic Emperor himself-Snoke and it's not visually stunning. Aside from weak prosthetic, there's a bland red backdrop. Was this "Red Screen" utilized as some menacing aesthetic or Disney limited the budget of this sequel? The Imperial Red Guard looked out of place while standing in front of the red background.

Kylo the angst filled Sith, looks all too reminescent of some cosplayer at a comicon (Minus the foul body odor and Cheeto stench.) and judging by his actions, became somewhat of a  predictable trope after refusing to stay commited to his cause during a counterstrike.
He does a good barrel roll while piloting a Tie Fighter however.

And while on the subject, there's what could have been one incredible scene in which a major player gets killed off only to pull a "Mary Poppins" followed by a"Duke's fallen into a coma" copout.
This is where things had taken a turn for the worse in this sequel. Suspension of disbelief be damned!

Finn has finally awaken after recovering from his wounds  but still buffoonish  and with his determination to find Rey comes to a sudden c&ckbl*ck, courtesy of this new character, Rose, who looks as if she was Porkins' illegitimate daughter.

Which brings me to...

Rey and retired Jedi Master Luke Skywalker picking up from where they left off. Here she is, following Luke through various weather conditions and terrain (Luke does what could be seen as a "Got Milk" parody in the most out of character way.) until he agrees to teach her the ways of the force upon learning of Han's death. Survivor's remorse can change one's mind, I suppose.

After watching that scene between Chewbacca and the Porgs (Now its a fucking PETA public Service Announcement!) I had enough! The story wasn't going nowhere, the pacing is disjointed and its fucking cold in the theater! I would continue further critiques, but this is when I left the theater! After watching the trailer, I expected a better sequel but unfortunately, forty minutes  in was all I can take  when I could have been doing something else, but curiosity  got the best of me and curiosity killed this cat's expectations.

So far, I can't see The Last Jedi taking the top crown from the disappointing The Force Awakens.
If i'm determined, I'll catch the rest on cable or that "other" option.
Stay tuned for a follow up review.