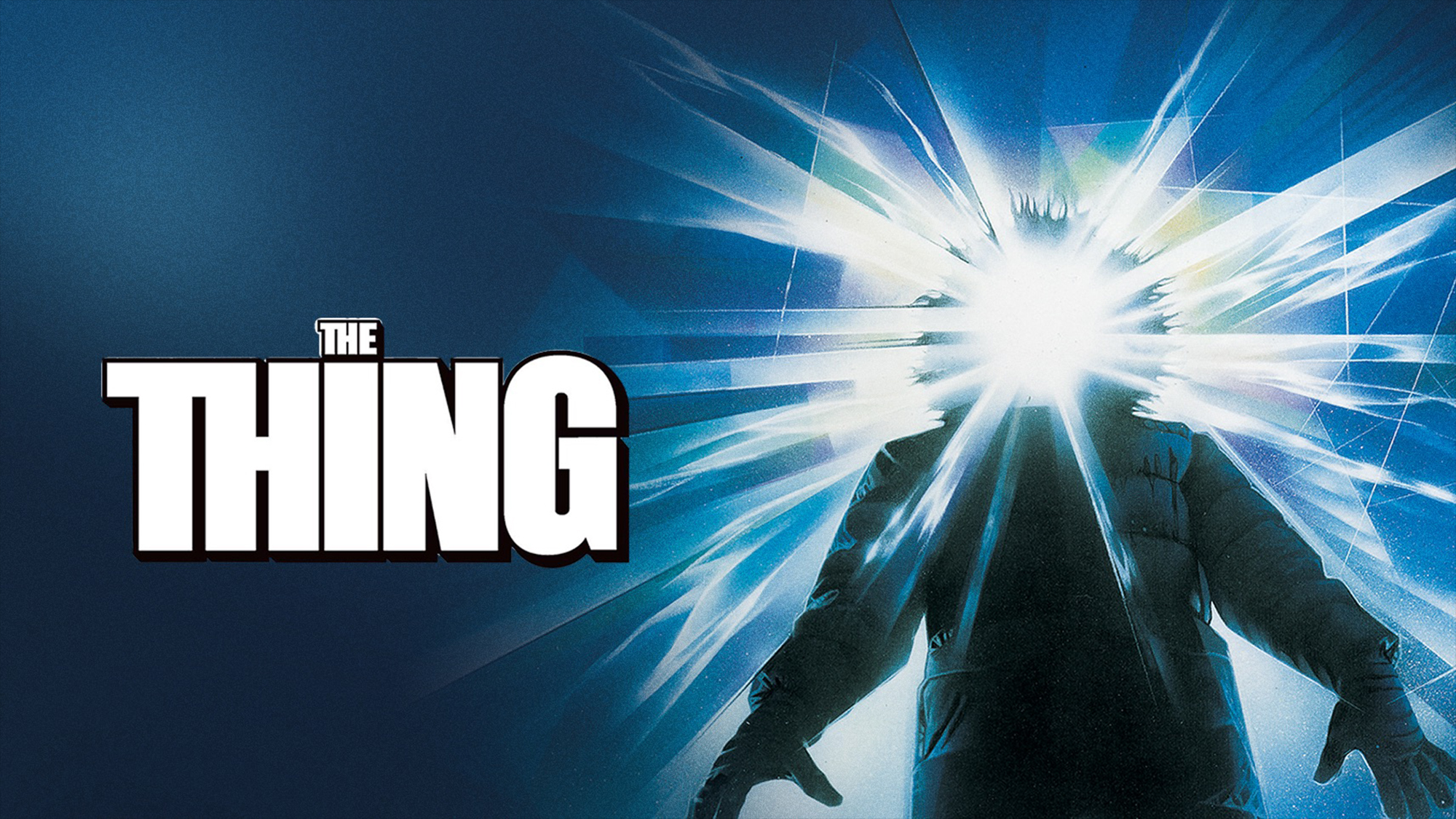 Back during the early Eighties, there were a few remakes of classic films such as The Fly, The Blob and Scarface, which unlike today's remakes, were successful because they were handled with great precision and quality. One such example is 1982's The Thing aka John Carpenter’s The Thing, that was an exceptional blend of Science-fiction and Horror.
As with 1951's The Thing from Another World, Carpenter’s version was loosely based on Joseph Campbell's short story "Who Goes There" but that's where some of the similarities end. The director fresh from his last moderate hit, Escape from New York, reunites with actor Kurt Russell as Helicopter pilot R.J. McCready who is the lead among the all-male ensemble cast and aside from Campbell's novel, 10 Little Indians and Agatha Christie's And Then, There Were None, served as the remake's major inspiration.

What was intended to be the first of John Carpenter’s Apocalypse trilogy, (They Live and Prince of Darkness The Thing takes place during 1982 in a remote American research base located in Antarctica, where the scientists find a sled dog while being hunted by “erratic" Norwegian pilots but you know what happens when you take in strays, right?? 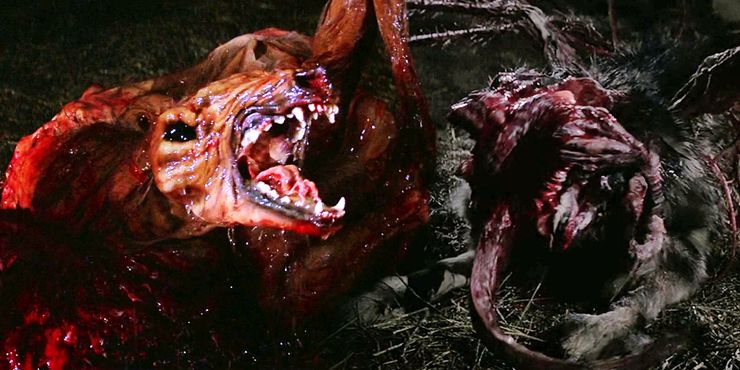 John Carpenter’s The Thing was one hell of an amusement ride, in terms of thrills, along with a few twists Carpenter fucked with our minds as we were left guessing who's who, or what. Aside of the ambitious gory effects, it was the paranoia narrative that kept moviegoers, such as me, intrigued. I remember seeing this in the theaters as a kid and felt very fortunate to experience this then misunderstood masterpiece. The fear factor and suspense were dialed up to 11 thanks to the amazing collaboration of Carpenter, Russell, Dean Cundy the OG DP, Enrico Morricone’s suspense fueled soundtrack and of course, the brilliant and batshit, Rob Bottin!

Many of us were on edge after watching the Canine’s face split into four quarters then separated itself into a giant mass with an eye in the center and goopy elongated arms reaching upwards the ceiling with some plant-like appendix with circular fangs coming at the screen! This was just a warmup act for Bottin's crazy practical effects, who claimed that the basis of those designs came from various nightmares he experienced. Glad I never had nightmares that extreme, but then again, it worked out well in his case.

Although it's titled "John Carpenter’s The Thing, " in many ways, it's also Rob Bottin's thanks to his ingenious creature effects, one frightening scene was when a Doctor (Richard Dysart) attempted to perform cardiac shock on an ailing patient, his fucking chest opens as in a vertical mouth with teeth that bites off the doctor's forearms,  then the human head stretches off the table with legs and eyes sprouting out of it, scurrying away. I never seen anything so bizarre yet, brilliant! 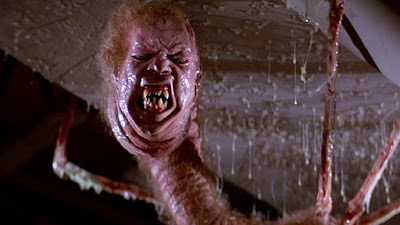 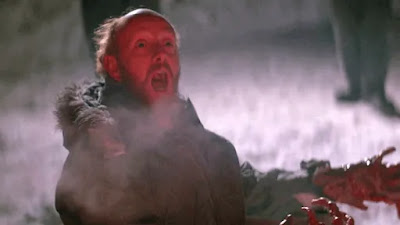 The creature itself, may be considered evil on the surface, however, its instinct is survival as in a hungry lion that finds its prey. What I admire about this alien, is how unique it was for that time, it can enter a mammal's body like a virus, can separate into different entities via mitosis, and has its own defense mechanisms, when discovered or attacked. Unlike the Xenomorphs from the Alien films, this Extraterrestrial lifeform is clever enough to imitate and act like its unsuspecting host and build a jury-rigged spaceship from various parts.
Now top that "Tony Stark!"

As for the eclectic cast, each came equipped with their own persona, McCready is not your stoic archetype, he's a loner holed up in his very own shack and cynical, prior to the alien's presence. Mac's role of leadership is put to task, as he is often questioned and assumed to be " one of those things!"

Palmer is basically a snarky Stoner who is not very liked by Windows, the often-frustrated Communications specialist, Blair is straightforward until he loses grip after discovering how the alien organism poses a threat to the global population, Clark the Dog handler, is another outsider who feels more comfortable with his canine buddies than his human colleagues
and of course, I would be remiss, had I not mentioned Childs who was my very first introduction to Keith David! His at times stoic and unflinching character gave a memorable huge impression when playing against Russell's McCready. Ironically those two were the last survivors and that's putting it nicely, since no one lived at the end of the movie.
It's not all dour as there were a few humorous scenes, like Gary's calm speech that ends in an outburst while being "tied to this fucking couch!" 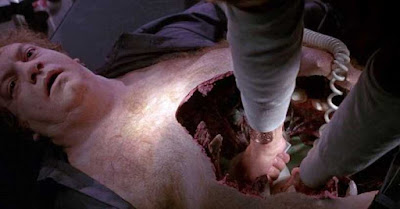 Enrico Morricone's compelling soundtrack added so much suspense and at times, jump scares i.e., Blair appearing out of nowhere to attack a startled Gary. Morricone's score is one of the best from his catalog the intro/outro theme alone, is worth owning. The sound effects, especially regarding the creature, was eerie af! During the infamous kennel scene, it sounded like a bunch of angry cicadas, and throughout the movie, when attacked, there's that yowling  guttural sound effect. This is one of the valid reasons why I appreciated the Thing since its theatrical release. Its nuanced and the scariest out of Carpenter’s filmography. "Sowwies," Halloween! Unfortunately, the reception following its release, was met with disdain due to an ambiguous yet very nihilistic ending during a nationwide recession, its gore content was off putting to most critics, and it was released around the time of E.T. the Extraterrestrial a much family friendlier alien, full of optimism in an era of uncertainty. 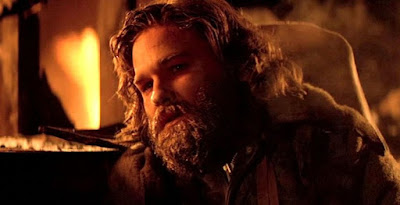 However, thanks to the advent of home video, VHS, DVDs and so forth, many have come to appreciate this sheer brilliance of this movie and in retrospect, what Carpenter once deemed his biggest failure, is one of the greatest Horror films, if not the greatest!

The Thing had gone on to influence other films such as The Predator, The Fly and even videogames like, Dead Space, Prototype, Contra Hard Corps, Among Us, and of course, the Resident Evil series. Resident Evil 2, 4, 5 and Code Veronica specifically. There were parts of the first Resident Evil soundtrack, which bares familiarity with Morricone's score. You must listen to the right cues in order to notice the comparisons. 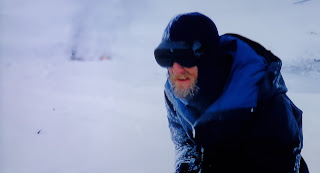 And speaking of "comparisons", I compared my copies of The Thing Blu Ray, 4K Blu Ray and streaming file (Movies Anywhere) and noticed two things:
1. The 4K disc is a slight marginal improvement over the Blu Ray/streaming file and Peacock's own stream is equivalent to the 4K disc?
2. The 4K disc's resolution is a bit grainy and is often saturated with a blueish contrast but again, there is no major upscale as expected from most 4K transfers.
The bonus segments are pretty much the same as the Special Edition DVDs, so don't expect any new material and as a matter of fact, the Mike Ploog storyboard outtake, where the "Blairmonster" attacks Nauls, is noticeably absent. So, you best hold onto your OG copies however, if you want an "updated" version of this classic thriller, this may be the way to go. At least at a cheaper price.
Thanks to it's continuing resurge in popularity, The Thing's legacy warranted a remake of this remake, but in the context of a prequel. Its (The Thing 2011) is one of the superior remakes from Carpenter’s filmography.
While there are many who would throw all kinds of allegories, such as the AIDS reference or in some far-reaching instance, "Homophobia??"

But at its central conceit, The Thing is easily interpreted as man's inherent mistrust towards one another. Whether its race, gender, political affiliations or even a Sports team fanbase, human beings are often rife with division. So, as I close out, I am very grateful to enjoy cinema experiences of movies both blockbuster hits or cult gems such as The Thing, in a time when things were simple and less stressful. Thanks, John and Happy 40th anniversary!
The Thing is available for streaming on Peacock or you can purchase the 4K Blu ray on Amazon
Trivia:
"Two Things in One"
Did you know: That prior to Mike Ploog's storyboard art for The Thing, he had also done illustrations for the Man-Thing comics? 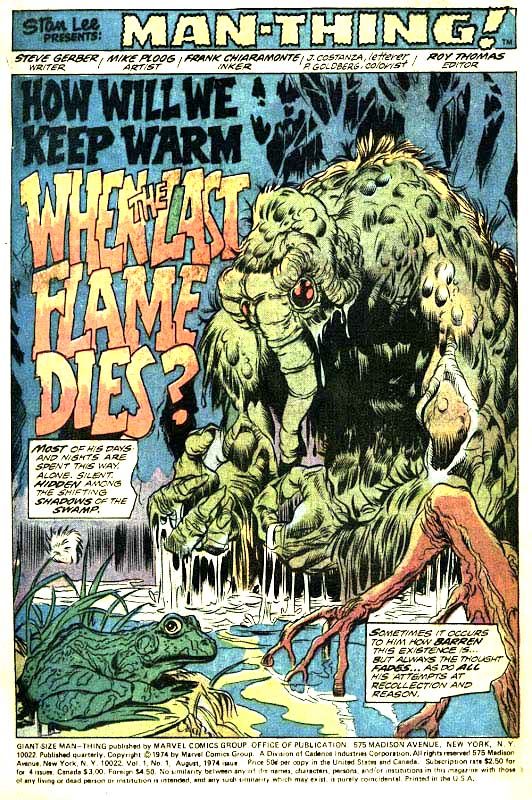 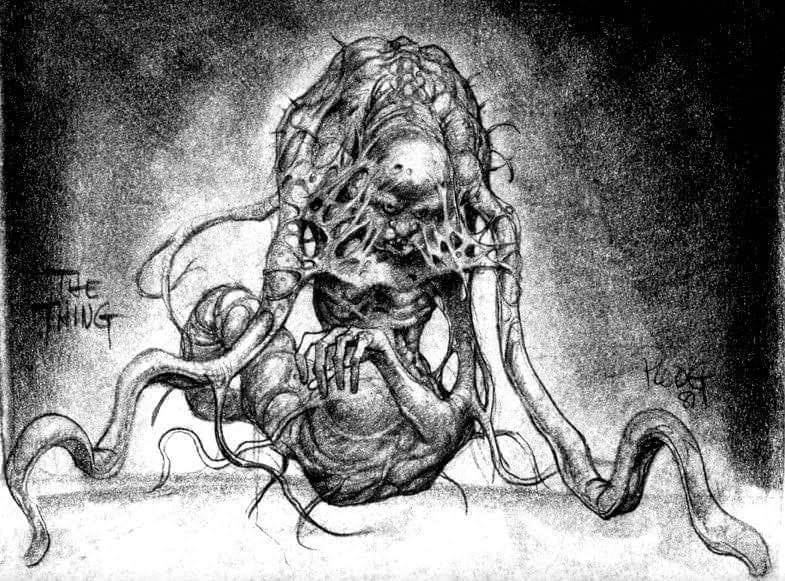 "Resident Alien"
Did you know: That Resident Evil creator Shinji Mikami, mentioned that the core of the first Resident Evil game, was loosely inspired from John Carpenter? As i previously mentioned, how some segments of the soundtrack were comparable between The Thing and the first RE game, well, here are photos from the ensemble team of both Carpenter's The Thing and Mikami's Resident Evil with the members of S.T.A.R.S. posing in front of a helicopter. 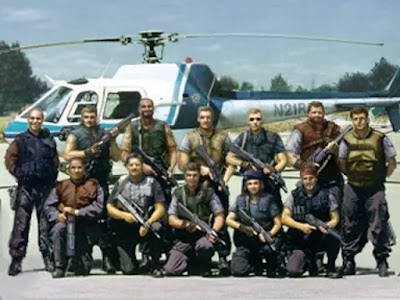 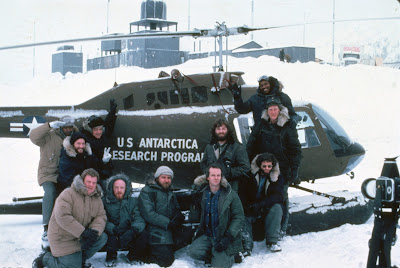 And Just for the Shits, my sketches! 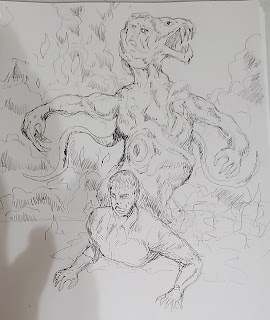 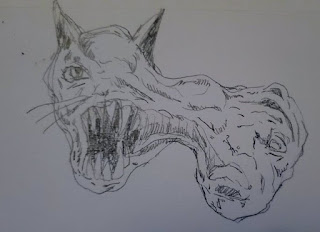