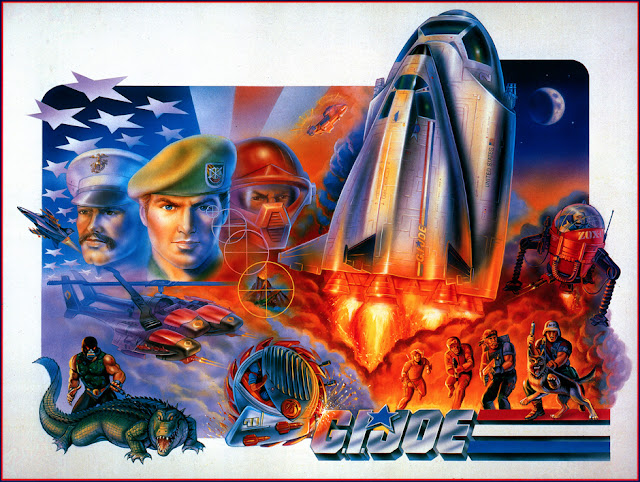 As 2022 marks the 40th anniversary of one of my favorite intellectual properties G.I.Joe,  I  would be remised if I didn't mention that time when Hasbro went full throttle, with “interesting” concepts, 35 years ago when the toy giant rolled out new figures, vehicles and accessories during 1987, with an unapologetic emphasis on Science Fiction, and a few other "out-of-this world" concepts, which was not only limited to their esteemed toyline, but even the then hotly anticipated Animated feature! While the G.I.Joe toyline contained sci-fi roots since their debut in 1982, Hasbro’s designers, and marketing strategists, thought raising the bar, would result in more sales, increasing their profit margins despite deviating from the paramilitary mythos and worldbuilding that Larry Hama established. In some ways, it worked, but can sprucing up things to break the monotony, was a sign of Hasbro going too far?

The influential toy manufacturer maintained the Joe figures’ designs, somewhat basic for the most part when rolling out the 87-lineup consisting of Crazy Legs, a red and grey infantry trooper, Fast Draw, a walking missile system, Sneak Peek, who specializes in recon surveillance and the very first heavy-set action figure, then there was Chuckles, a crossover of 80's icons Magnum P.I. and Miami Vice's Sonny Crockett. You would think actor Don Johnson would be handling the voice acting as the Joe's undercover expert, but that would be too obvious! Rounding out the rest is Gung Ho with Marine Dress blues. I guess he's only good for posing as there is now way you can have the "Raging Cajun" fight in those uncomfortable shoes. Representing the female side, is Jinx, who also serves as the Joes' newest Ninja while Lt. Falcon, a Green Beret, who slightly resembles Flint and even carries a shotgun, but he’s nowhere as compelling as the Warrant Officer’s 1985 look.  Now here’s a lil trivia for ya, both Law and Order and Tunnel Rat were based on Kirk Bozigian and Tunnel Rat respectively, the real-life driving force of G.I. Joe A Real American Hero. “Now you know and knowing is half the battle!” 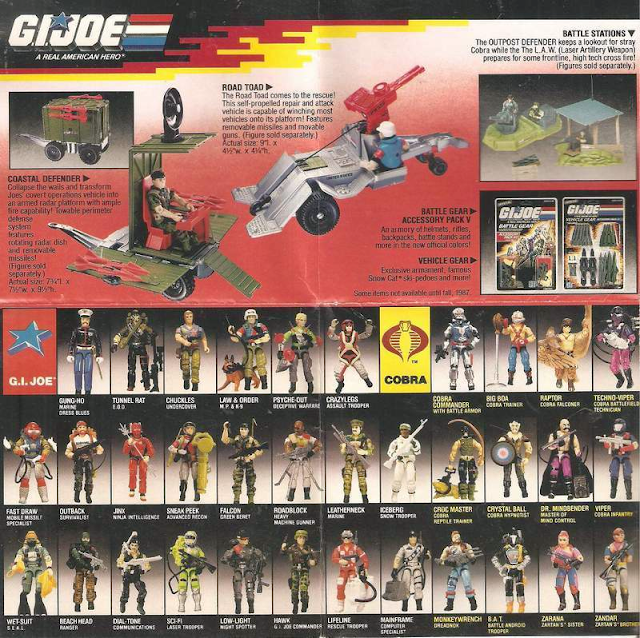 The Fridge, was modeled after NFL Superstar William "Refrigerator" Perry, was available as an exclusive mail order, but he had his own animated commercial and a cool Mace shaped like a Football!
Overall, the 87 Joes passed the "quality inspection" but look WTF came out on Cobra's end? Battle Armor Cobra Commander looked cool, and it made sense to deck him out in bulletproof wardrobe as he is Cobra's highest-ranking officer who can lead them into battle without worrying about catching a bullet. I wished they could have retained the royal blue color scheme, as the turquoise pallet is fugly when juxtaposed with silver.
But this new Cobra Commander made a few friends....from the  nearest Zoo, when you look at Cobra's henchmen recruits who are decked out in Animal motif and call signs. 🤔
Raptor the Falconer looks like Zartan with a bird headdress and wings. He's like a loser version of Marvel's Falcon, who also comes with a pet Falcon and it’s no wonder why Larry Hama killed him off too soon in the comics. 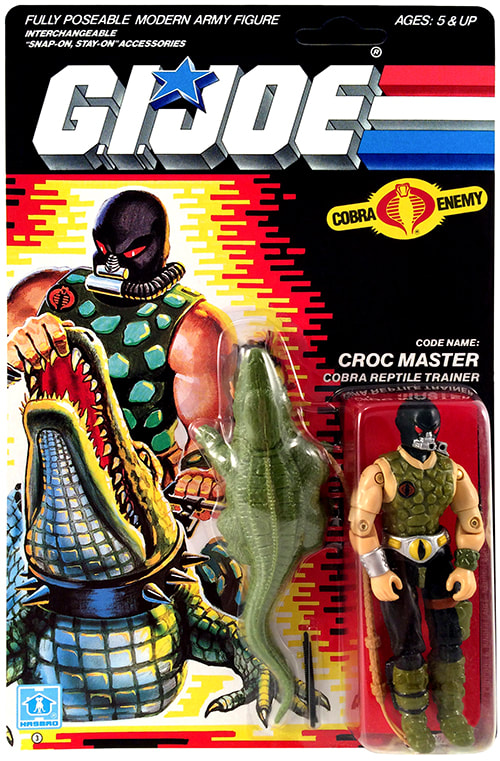 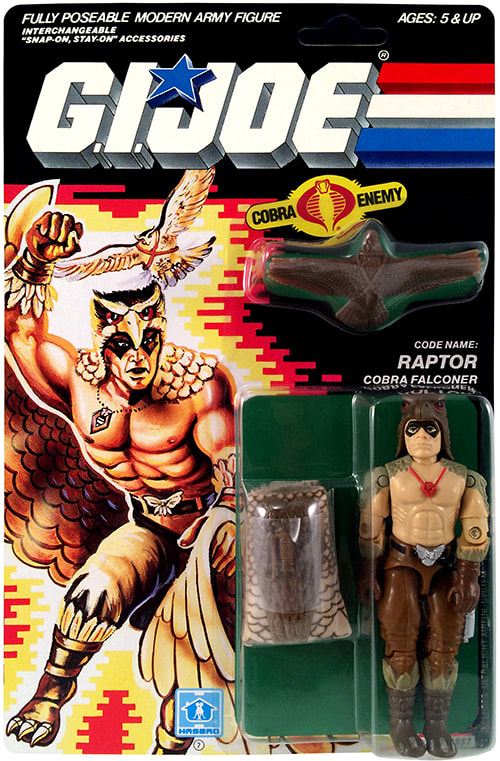 Meanwhile Croc Master, is a Crocodile handler. Um, yeah. Then there's Big Boa who resembles Humongous from Mad Max 2. Originally, he was supposed to be Rocky Balboa's evil counterpart. You heard me, Hasbro had plans to manufacture and distribute an action figure based on Rocky!! I guess the Joes needed to complete their athletic roster with a Wrestler, a Linebacker and now a Boxer, who walked in a bar...
It gets weirder with Crystal Ball the Cobra hypnotist?!? Ironically this figure was created by Horror Author Stephen King Ok, that should be all, but......what's this..? Cobra La??? 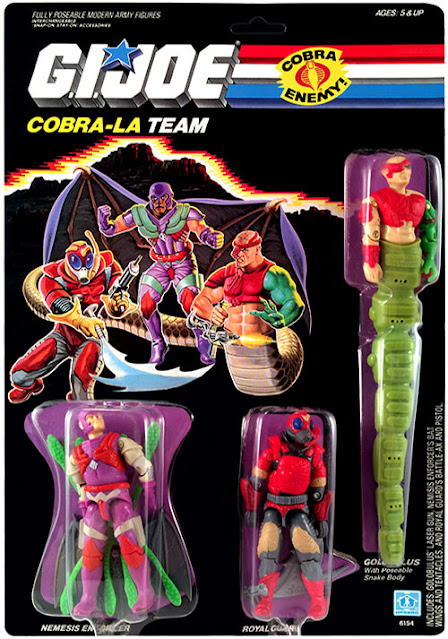 This was perhaps the toyline's lowest point or at least the beginning of their lowest point. Many who have either purchased the three-pack figures or watched G.I. Joe the Movie, should be aware of these strange antagonists as Cobra-La, was originally created for the animated feature; an ancient civilization that once ruled the Earth, but retreated to a hideaway in caves in the Himalayas after the "Barbarians" advanced in technology and science, more than likely, released dangerous gas emissions causing climate change. Cobra La’s half serpent ruler Golobulus was also the brainchild behind Cobra with an once nobleman, now Commander determined to take back the earth. Kinda like the Alt-right claiming to "take back our country" but I digress. 😉 To balance out the silliness from "Cobra La " Hasbro issued three figures on one blister card, Sgt Slaughter's Renegades, a colorful trio of antihero mercenaries under the command of Sgt Slaughter. Personally, Mercer the former Cobra Viper, was my favorite out of the three. 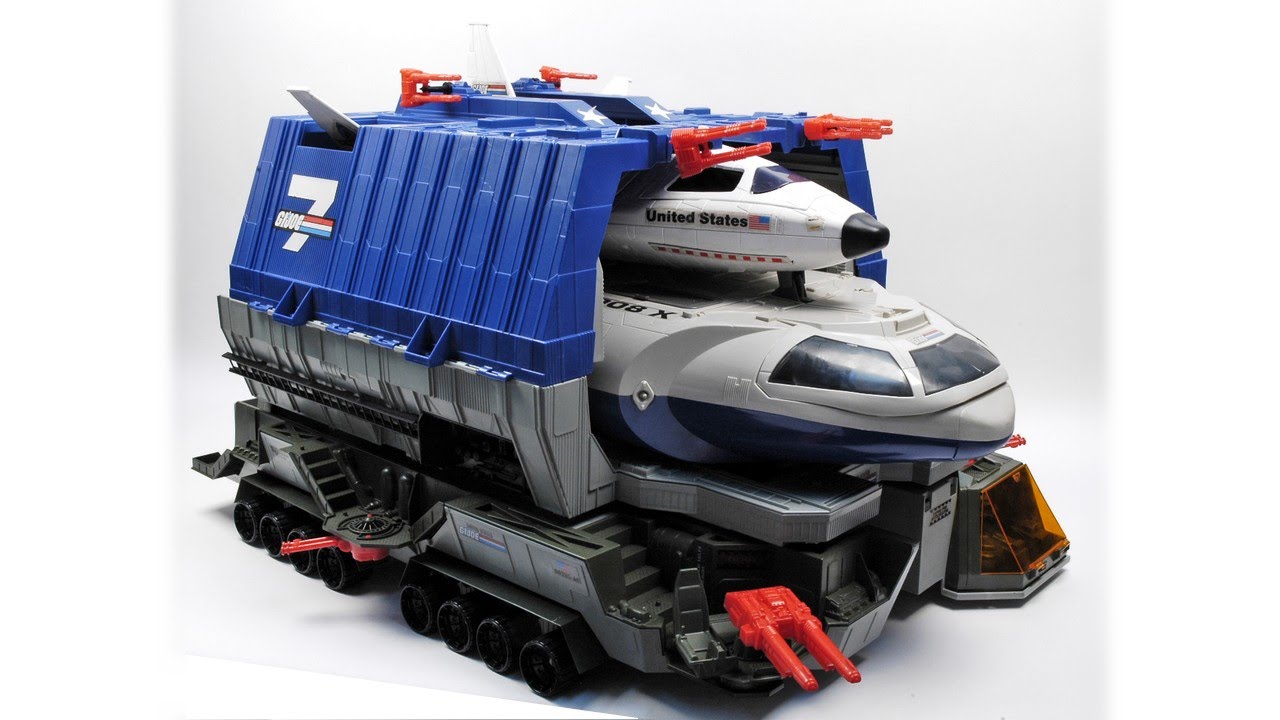 To say how far the 1987 G.I. Joe toyline went, is an understatement as they really gone far, as far as the void of space with the big, ticketed item, Defiant shuttle playset which is one of the best if not the best Joe playset item. The booster serves as a space station while the shuttle carries a grabbing arm if I remember correctly. There's also that large gantry that elevates the shuttle complex for takeoff. This fucking thing goes for X amount of dollars on ebay, and I'm talking about the booster! Now once again, I must divert my attention back to Hasbro and Marvel productions' finally joint venture that was G.I. Joe the Movie.  I remember getting amped after watching that kick ass intro of this animated feature beginning with the opening aggressive lyrics; " Crashing through the sky, comes an evil cry, Cobra, Cobraaaa.." This scene was like its own movie and in hindsight, it was the best part of G.I. Joe the Movie which had enough flaws to have fans such as myself, very disappointed. Starting with the implementation of let’s say it: 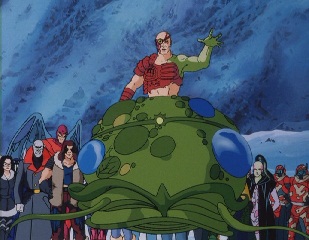 "COBRA LA!"  I was intrigued with Golobulus who Voiced by Burgess Meredith who was brilliantly coincidentally, was the protagonist in 1945's The Story of G.I. Joe, so perhaps it was fitting to cast him in a major supporting role as the infamous Lord of Cobra La. That aside, I didn't care for Lt. Falcon's redemption arc, which is like a standard trope from 80's films like Top Gun, Officer and a Gentleman and so forth. The Rawhides were boring with the exception of Tunnel Rat (somewhat based on ARAH's true creator, Larry Hama. ) and Jinx, whose interactions with Lt. Falcon was amusing to say in the least. Big Lob came off like a racial stereotype to some degree and why the fuck did they not have "The Fridge" instead? As much as I liked Don Johnson from Miami Vice, his Lt. Falcon was a lackluster substitute for Flint, and not to mention how he was used as a plot device as with Transformers the Movie 's Rhodimus Prime. Notice the similarities between the two? And yes, Joe the Movie was finished before Transformers ergo, Duke died first...! 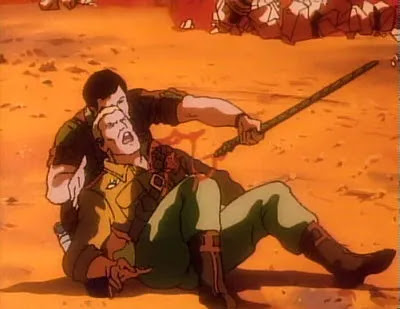 Wait, you say he's "in a coma???" Yes, after getting "Thulsa Doomed " by Serpentor, Duke survives? WTF! However, if there was anyone, I felt empathy for, was how Cobra Commander was further sidelined and mutated by spores, while repeating himself, "I was oncccceee a man..." until he completely turned into a snake. 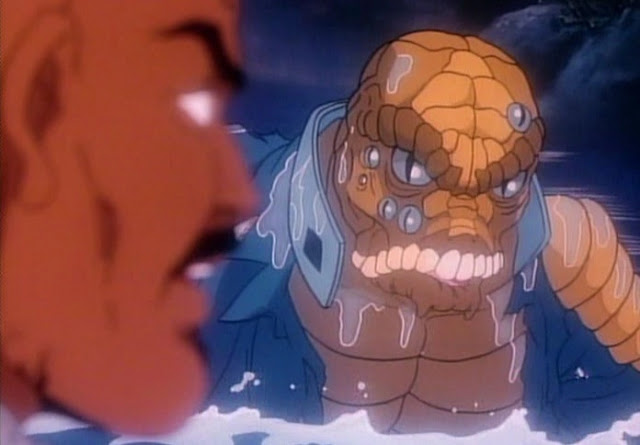 Yes, CC was vile, yet likeable as a Yosemite Sam villain, and honestly, he deserved better. Again, I assumed that Johnson would be better suited as Undercover specialist Chuckles Instead he's Falcon with more speaking parts, meanwhile, Chuckles was silent as Snake Eyes throughout the entire movie. This animated feature was the official finale of the Real American Hero animated universe as Hasbro no longer paid Sunbow/Marvel for any further seasons or episodes for G.I. Joe. So yeah, Duke still lives, Cobra Commander and the civilization of Cobra La is presumed dead, Destro and the Baroness are captured while Serpentor and Golobulus are on the lam. There were hints of another season which entailed vehicles and weapons that can change the scales of Joe's battle against Cobra, had it come to fruition.  And that leads me to this segue.
Battleforce 2000 I'm going to be honest, Battleforce 2000, a sub team of technical advanced soldiers with vehicles with detachable components, and when combined, transforms into a well-armed complex called "the Future Fortress."  Yeah, it's far-fetched, but I was more impressed with the BF 2000 line than both the Mobile Headquarters and the Defiant. So, yeah 1987 was an interesting year for G.I. Joe and one of the best Christmases ever! And looking back, it was an exciting, albeit bizarre era of those Real American Heroes. "Yo Joe!"
Some Photos courtesy of: Hiss Tank, and 3D Joes
Christmas Controversial G.I.Joe Hasbro Stalkeye The Toys that Made Me!