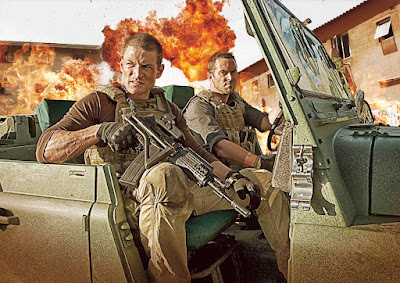 Reviewed and Written by Bop

Someone recently asked me what I think are the TV shows with most action. There were 2 that came up in my mind right away and they were Gangs Of London and Human Target. And then I remembered Strike Back. I had to finish Strike Back.
Strike Back is a Cinemax show, that started years ago, but I quite somewhere in season 2. My reason was that I am not really into soldier and war stuff. I hate war, because they are always caused by wimpy pencil-neck geeks or just all around bitch scumbags who have never been in a fistfight in their life. Also, the show was full of propaganda and I hate propaganda.
However, I read Michelle Yeoh appeared in season 5 so I had to watch season 5. If you don’t know who Michelle Yeoh is, you deserve a slap. But not the type of slap a pencil-neck geek would give you. 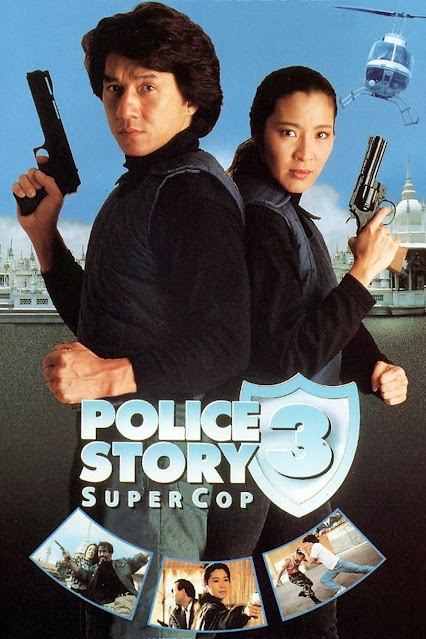 Does this ring a bell?
So I started watching Strike Back season 5 and totally forgot how action packed Strike Back was. Season 5 was no exception and made me restart the whole show again.
Philip Winchester and Sullivan Stapleton are very convincing as badass soldiers and they don’t look like pussy lotion boys.They totally carry the show and are quite the find. 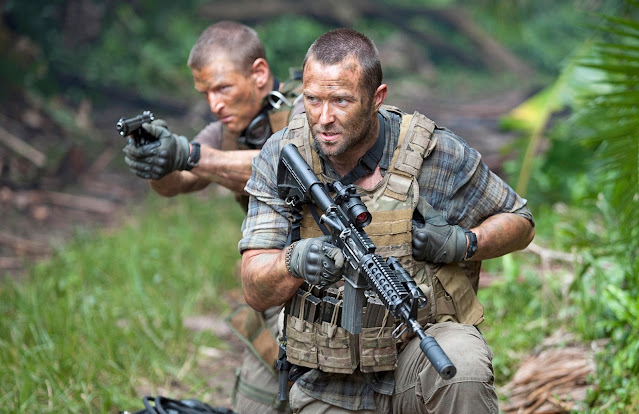 Badasses
What I do like about the show, when I don’t look at the propaganda in it, is a lot. The locations, the tension, the violence, the action and the despicable pencil-neck geeks. I find it quite realistic how it is always the pencil-neck geeks who cause war but also betray their own soldiers. Being a soldier is a thankless job in Strike Back but also in real life.
Strike Back is a show that deserves attention, if not for the action alone. If you didn’t see it, start now. However, you only need to watch the first 5 seasons since Philip Winchester and Sullivan Stapleton quit and the last 3 seasons contained pussy lotion boys and other bullshit.
Strike Back will strike you and it will strike you hard.
Bop! Cinemax Men of Action Opinion Poptic Nerve Retrospective Review Strike Back Television

"Spider-Man, Spider-Man, does whatever a spider can..." Oh how I fondly remembered that jingle from the animated series featuring the iconic Webslinger whose titular series  appeared on syndicated networks during the mid to late 70's. (Despite having  originally making its debut during 1967 on ABC Saturday Morning.) What's  amusing about the Spider-Man series was the unintentionally hilarious seasons (Two and three, respectively.) courtesy of production animator Ralph Bakshi Fritz the Cat, Heavy Traffic, American Pop, just to name a few. and Krantz Films. Krantz had taken over production of the series after the previous animation studio, Grantway-Lawrence,  went bankrupt. And with them, Stan Lee and John Romita's input was gone. This would explain the lack of quality when it came to animation, generic villains and background music that occurred when Krantz Films had taken control of the series. It was apparent that Spidey's show had ta
Read more

Pop Topix: Winners and Losers of 2019

In the first installment of this Podcast, Stalks and his co host Bop, list what they think were the wins and losses of 2019!The answers may shock and surprise you! So nurse your cocoa, because you're in for a head trip while recovering from those Christmas party hangovers, as I have done. Happy New Years, Fuckers!
Read more

Miami Vice finale: Freefall (1989) Directed by Russ Mayberry Reviewer’s note: Originally, I planned on doing a write up last year which was the benchmark of this episode’s 30th anniversary but was either sidetracked or too lazy. So now, here we are. We had one hell of a run, didn't we, partner." That quote pretty much sums it all! 1989, was the bookend of the greatest decade of popular culture. The 1980's was on its way out. But before fading out, there was this finale of yet another great series which defined  this exciting decade: NBC's Miami Vice 1984-1989.  This Crime Drama was innovative on so many levels, be it the implementation of adding rock songs within scenarios,  Jan Hammer's amazing soundtrack, adult subject matter that at times were disturbing,  solid character arcs, the introduction of then unknown actors like Julia Roberts, Bruce Willis and Wesley Snipes just to name a few, the bromance between Sonny Crockett and Ricardo Tubbs, gorgeous nightlife sc
Read more

Whenever someone mentions, "Tatsunoko", the first thing that comes to the minds of many, Speed Racer, Robotech and Battle of the Planets ..um, yes and no! Although all three shared a huge amount of success and pop culture status within the states, they were simply bastardized adaptations which for the most part, sacrificed adult content, profane language, death and of course violence in order to adhere to the standards and practices of American television. Note: Despite having certain content removed, Robotech was a far less example of heavy edits since most of the violence was left intact. Founded in 1962, Tatsunoko Productions is responsible for groundbreaking animation and bending genres to accommodate both children and adults. They were the staple of Japanese animation because of early trendsetting series like Mach Go Go, Macross and of course, Gatchaman. Released in 1972, Science Ninja Team Gatchaman is about five Superhero Ninja teenagers, recr
Read more

As of recent, AMC's The Walking Dead hasn't been on top of their A-game like a year ago. However, thank almighty gawd, Buddha, Allah or whatever the hell you worship, that there are exceptional alternatives when it comes to Horror Television. No, I'm not referring to the disappointing Hugh Jackoffman adaptation but instead, this obscure SyFy series that is part Blade, part Buffy the Vampire Slayer and yes, of course, The Walking Dead. Regarding the latter the comparison is obvious due to its soap opera scenarios, situations and an ensemble of diverse yet, oddly suspicious characters. This adaptation of Van Helsing is primarily based on a graphic novel as our titular (as in ambiguously named) character Vanessa Helsing (Kelly Overton) awakens from a coma (Sounds familiar, Walking Dead fans?) only to find herself during a Vampire apocalypse. But fortunately, or rather unfortunately Vanessa discovers that she has the attributes of a vampire. "All of
Read more

Ah, November! To many, December is thought of as that "most wonderful time of the year ", but being the contrarian that I am, that honor goes to the Month of November, since 1991 Where at the time, I was working for Toys R Us as a seasonal employee while making and saving enough money to buy this "hot" but not so new console called, Sega Genesis! Sega's successor to the Master System, debuted around August of 1989. I didn't get into videogames until a year later. At the time, I wasn't  too familiar with the Genesis nor did I care to invest in one since I already have the NES which had some damn fun titles, including hidden gems like Low G Man, Shatterhand, Isolated Warrior, Power Blade, Snakes Revenge and yes, G.I.Joe ! Yeah, I was content...until I saw a bunch of Television spots promoting the hell out of the Genesis, boasting about its 16-bit graphics while highlighting a few games. Also, the jingle, though immature, was ca
Read more

This was the movie that really made me a fan of the Anti-Hero formula. What started off as an idea inspired by the Death Wish film, cynicism from Nixon's Watergate scandal and a trip in Manhattan, Director John Carpenter has created one of the best dystopian films in both cinema and pop culture!   What's it all about? In what's referred as "John Carpenter's Escape from New York" it's 1997 and the crime rate within the United States has risen to an overwhelming percentage. During a flight to an International "bargaining" summit, the Air Force One plane makes an unexpected detour thanks to an extremist. The plane's most valuable passenger, President John Harker suddenly finds himself captured and used as a bargaining tool by the inhabitants of what was once New York City! https://www.youtube.com/watch?v=tGLUVp0Fq_0   Enter ex Special Force vet, now outlaw, SD "Snake" Plissken who is coerced into rescuing the President
Read more

Disclaimer: The following opinion expressed therein is those of the author and does not necessarily reflect the views of the publisher.  Jus sayin. (:' Welcome to the best and worst of 2019. 2019 was a shitty year. Some great people died, but the worst things is that 2019 will go down in history as the year that the age of Idiocracy started. Don’t know what I mean? Watch the movie Idiocracy. Let’s just say that humanity will never be the same again and it will never recover. You can thank the LBGTQP lobby, Disney, snowflakes and the selective virtual signallers and morality crusaders for that. I will be fine, because I have better things to do than sit through shit movies that last more than 1,5 hours. So without further ado, here we go Movies Worst: Deadwood The Movie What an utter piece of shit movie this was. This year I decided to watch Deadwood for the first time since the movie would be released to finish the storylines. What an obnoxious,
Read more