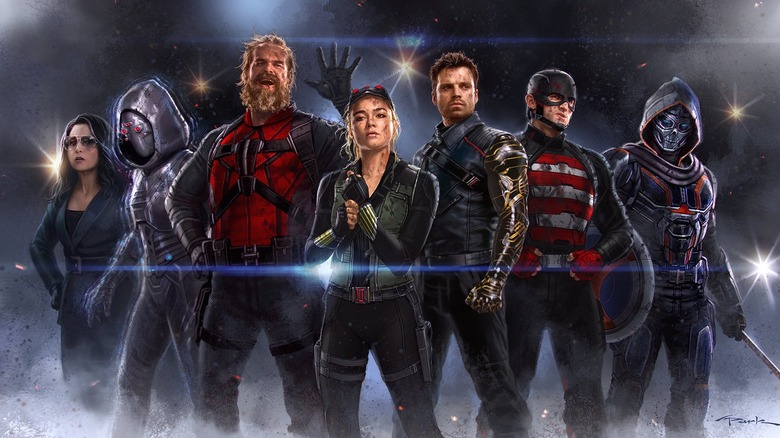 There was an amount  of Phase Five news from D23's presentation one in particular,  was official plans for an upcoming Thunderbolts movie based on the comics where villains, antiheroes and heroes work together for US government oversight.  Kinda like DC's Suicide Squad.  Take it for what you will.
The roster includes Julia Louis-Dreyfuss as Valentina Allegra de Fontaine  Wyatt Russell  John Walker slash US Agent, (Wyatt Russel of Falcon and the Winter Soldier)  The Ghost, ( Hannah John-Kamen)  ,Taskmaster played Olga Kurylenko  from 2020's Black Widow along with David Harbour's Red Guardian.Also, Sebastian Stan as Bucky Barnes and Florence Pugh as Yelena, who is the field leader like Captain America was to the Avengers.
Opinion: Sounds ok, but I'm on the fence about this. Bucky or even Baron Zemo should have led the team or at least it should be a joint leadership between Yelena and Bucky, that would start an interesting dynamic. Natasha Romanoff would have been great as the leader, since she's capable of having leadership qualities, but unfortunately she's fucking dead!
Yelena is a great character but leader? No. That decision is as questionable as Logan leading the X-Men. Not feeling it.
And don't get me started on Taskmaster! The MCU version was utilized as a cheap plot device, that failed to deliver. We need the brash arrogant Tony Masters with cape, that's right I said it! Perez's OG look, is still a look! From what I gather,shooting begins next year, so we'll see what transpires.
Werewolf by Night
Not too much is known from this upcoming Disney Plus series aside from being based on the 70s Marvel Comic, however after watching the B&W trailer that pays homage to the classic Universal Monsters films of old, I'm feeling a bit optimistic when I saw a few familiar faces from the footage.  One could be Blade, there's  also Bloodstone, but the biggest reveal that put a smile to my face, was a split second shot of the Man-Thing, one of my favorite Monster heroes from Marvel. Hopefully,  this will lead to him having his own feature film as he so deserves it after the highly disappointing 2005 film.
Werewolf by Night, arrives this October 8th only on Disney Plus.
Secret Invasion Trailer
Samuel L. Jackson is back as Nicholas J.Fury along with a few familiars like Talos played by Ben Mendelssohn, Cobie Summers as Diana Hill, and Don Chedale as James Rhodes aka War Machine.  The plot involves the shape-shifting Skrulls, who  have infiltrated all aspects of life on Earth, which could range from civilians, politicians and who knows, maybe even Superheroes! Secret Invasion is slated for 2023 on Disney Plus.
This may be what's need to balance out most of the Shows and films from Marvel's disappointing Phase four, and with the fifth making their way into the mainstream, we can only wait to see if the Marvel cinematic universe, can be saved.
"Reaction" Black Widow Disney Plus Man-Thing Marvel Cinematic Universe News 4 Nerds Taskmaster