The Lorelei Signal: The Star Trek episode that was equally progressive and shocking! 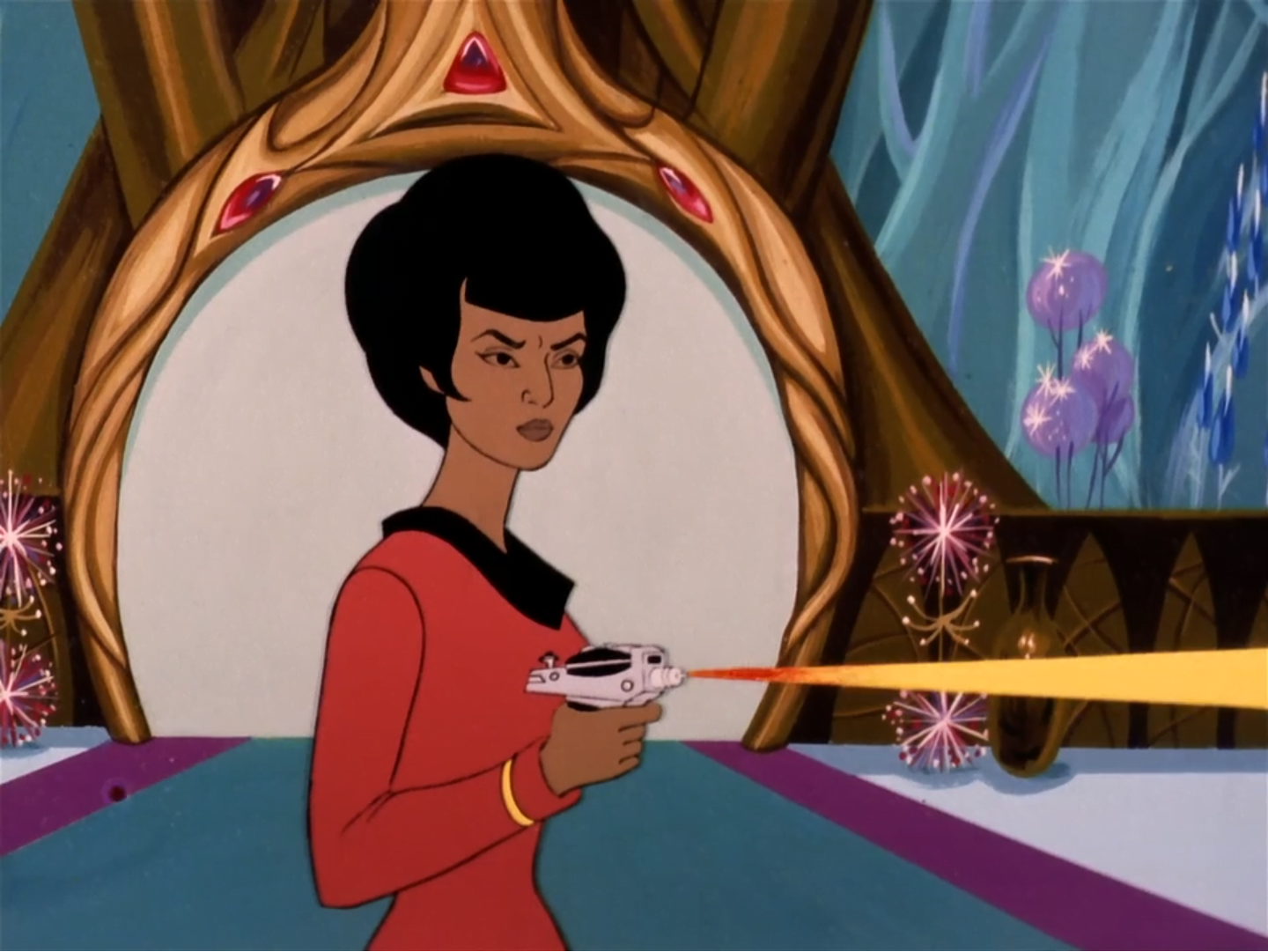 Aside from her other contributions, such as selecting the first Black-American Astronaut for NASA’s Space program, the late Nichelle Nicholas' trailblazing legacy will also be celebrated as the first Black woman within an ensemble Science Fiction television series, along with the then controversial interracial onscreen kiss as Lieutenant Uhura. However, it was an episode from an animated series of all things, that was the character's defining moment.
Star Trek was one of the more iconic intellectual properties that the American animation studio Filmation developed into a Saturday morning cartoon. While the premise was literally the same as the live action series, the studio had taken creative liberties when focusing on thematic content and action equally compared to the original series’ allegorical approach sans Kirk's various romantic liaisons. But I digress. 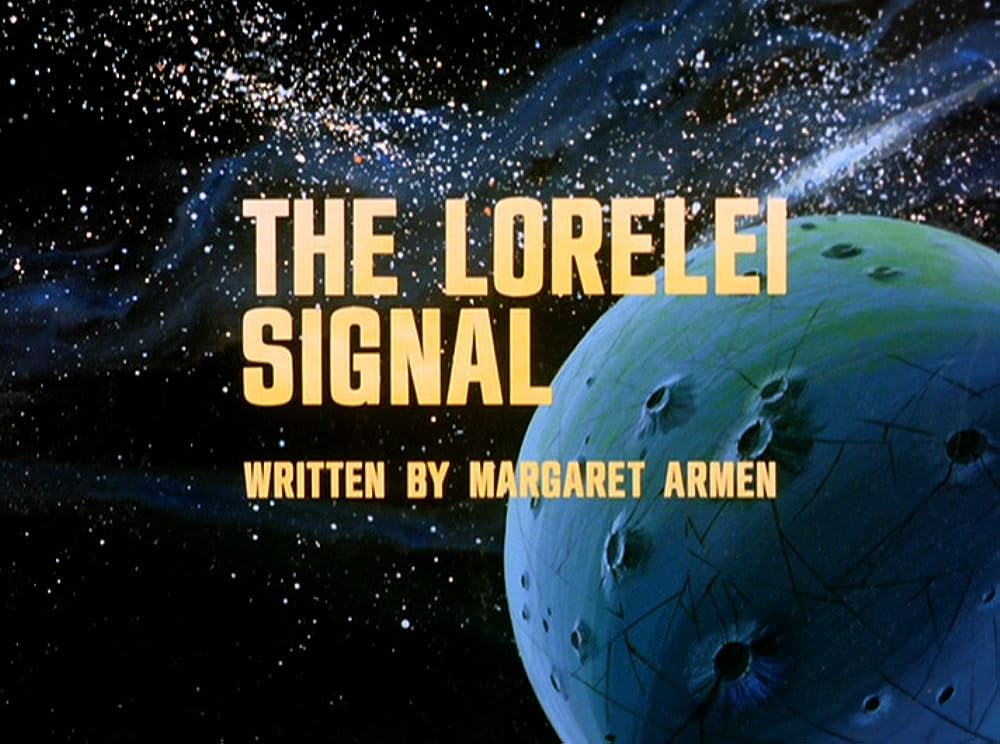 In Season 1; Episode 4 titled, The Lorelei Signal, the crew of the USS Enterprise receives an incoming musical signal that lures them to a remote planet in the Taurean system.
Captain Kirk, Spock, McCoy and some Redshirt investigate the planet inhabited by beautiful women, reminiscent of an Amazonian society. Unfortunately for the men of the Enterprise, the music impairs their judgement to the extent of experiencing euphoric hallucinations.
"Captain's log, stardate 5483.9. The beauty of this place is unequaled... it's the answer to all a man's dreams... exquisite in every way. We're here to investigate... to investigate... the women radiate delight..." 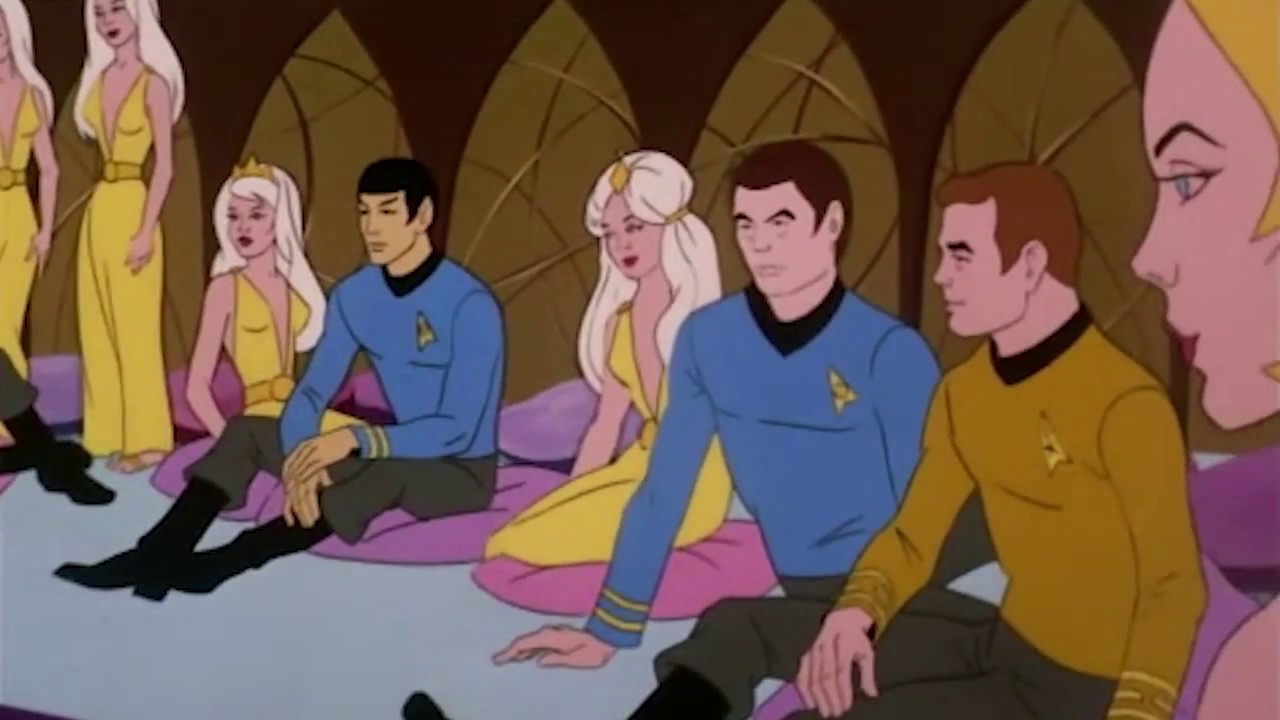 Kirk and his landing party are inebriated and when they awaken, McCoy deduces that they have aged 10 years each passing day, as the all-female inhabitants are practically Space Succubus siphoning the life energy from the men, as it was later revealed that both Taurean male and female species from a dying homeworld settled on the planet, was weakened. But the only way that the women could survive, is by draining the male species' remaining energy and in turn, causing their deaths while making the women immortal without aging, yet its only "side effect" is not being able to reproduce. Not that it made a difference anyway, as the men were quickly killed off. They literally killed off all the men for exchange of immortality!
This gives new meaning to the term, "Survival of the fittest." 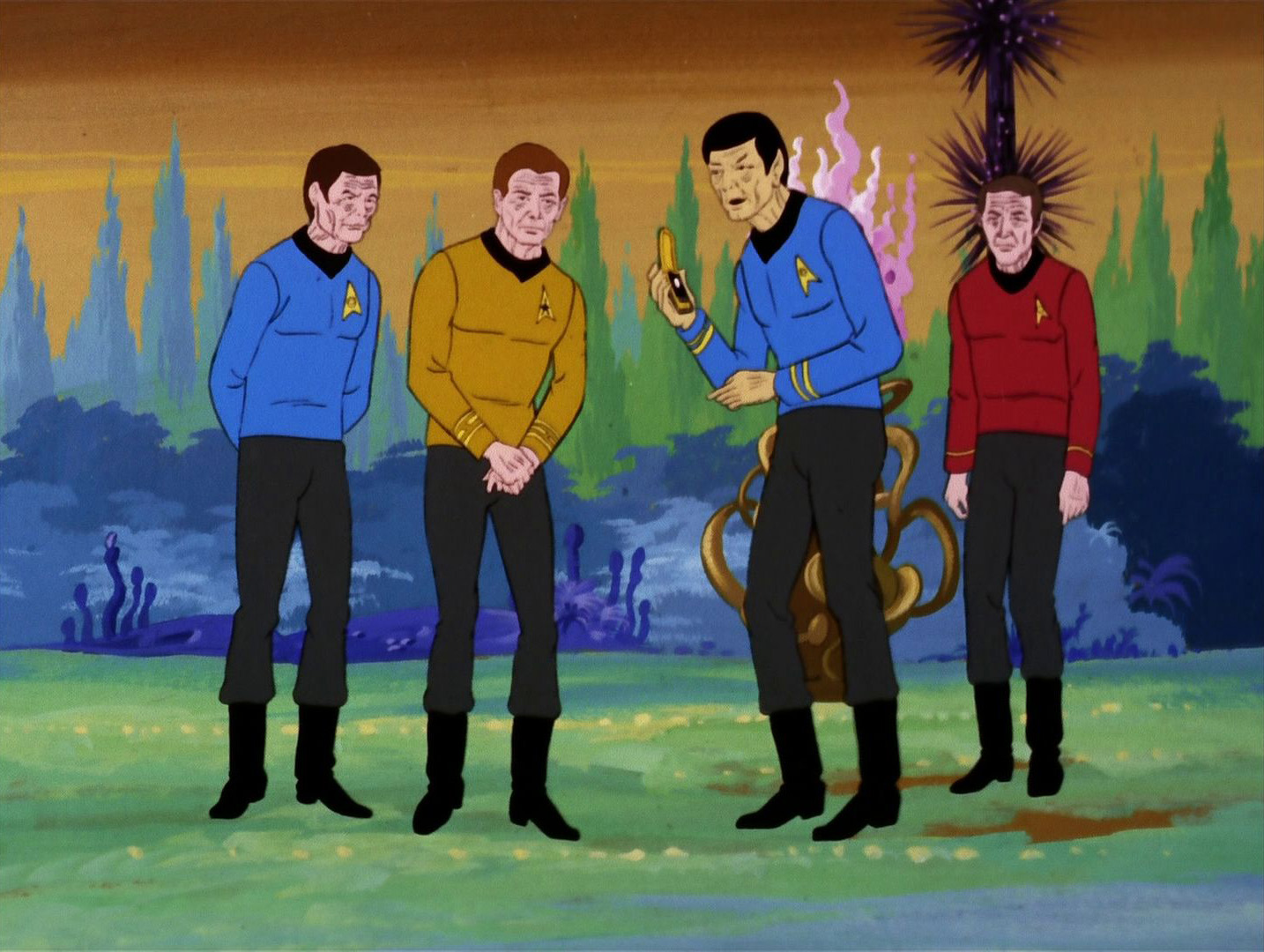 "Ship's log, supplemental. Lieutenant Uhura recording. Due to Chief Engineering Officer Scotty's euphoric state of mind, I am assuming command of the Enterprise. I accept full responsibility for my action. A detailed account will be recorded later."
What I admired about this episode, was the subtle horror approach and adult themes such as the price of immortality.  All this within a science-fiction cartoon, originally aimed towards a younger demographic. 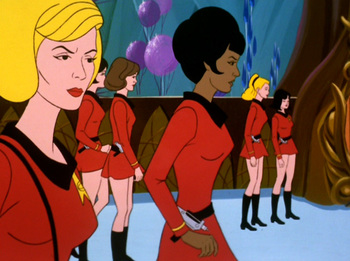 That said, I was more impressed at how Lt. Uhura (Voiced by Nicholas) held court, via assumed command of the Enterprise and assembled an all-female security team to rescue Kirk, Spock and McCoy that concludes with conflict followed by resolution. It's unfortunate that the only way an underused character like Uhura can take command, is through circumstances such as the male population being subjugated, but in those days, you take what wins you can get. This episode written by Television scribe Margaret Armen (Who previously penned three Star Trek live action eps) contained bold storytelling thanks to a shocking revelation, with a slight of pro feminist angle. Without the symbolism from this episode, Filmation went on to develop another sci fi series called Space Sentinels, where Astra, a Black female, was the leader of the super powered trio. A first long before Storm of the X-Men, or Monica Rambeau leader of the Avengers, and other examples of Black female leadership in fiction existed.
Rest in Eternity, Nichelle. May your stars forever be at peace. 🖖 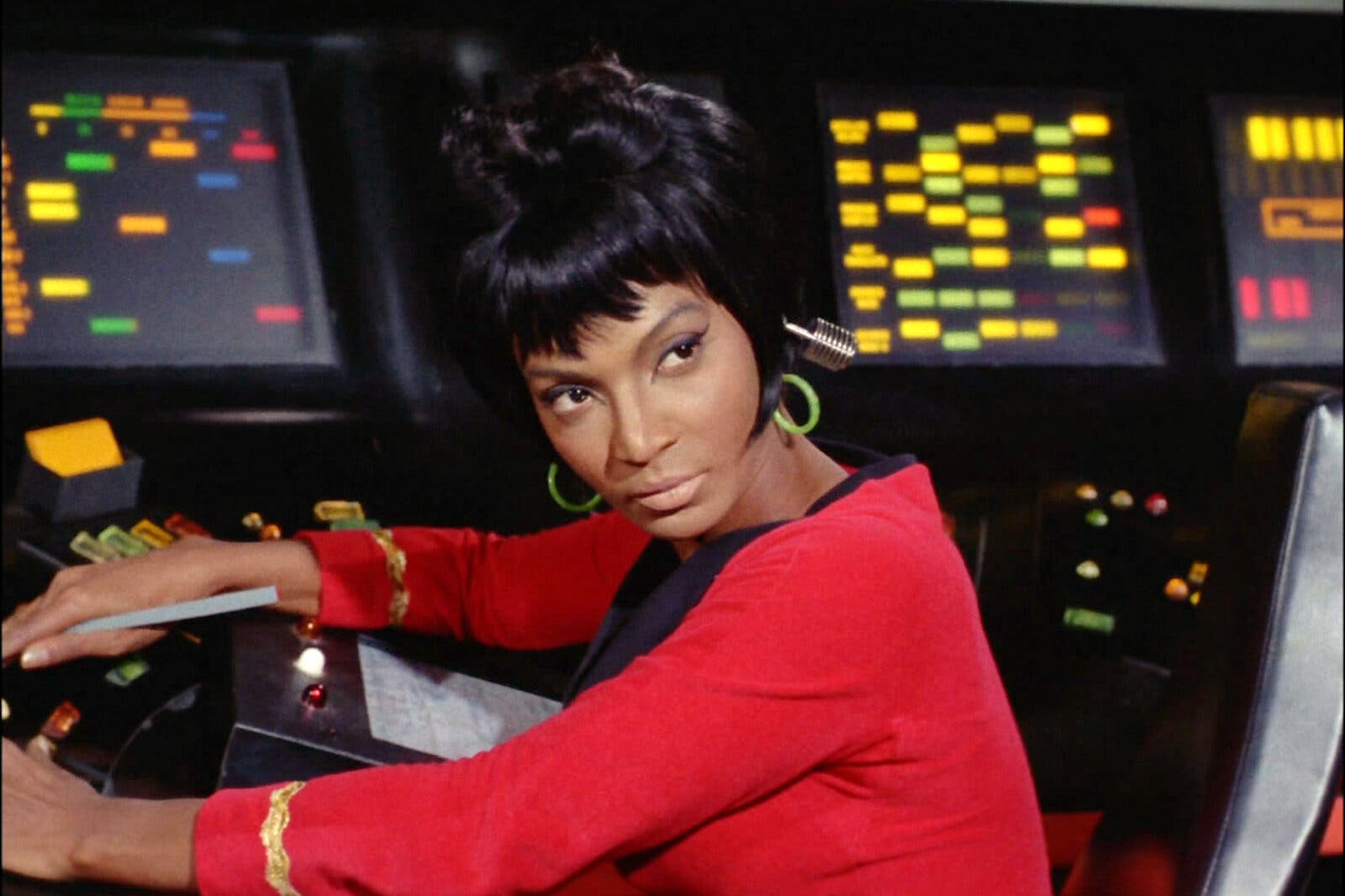