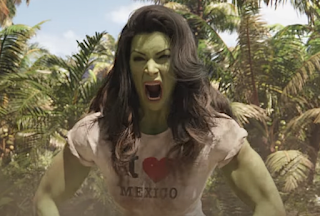 Written by Jan
⚠️ This review contains spoilers!!
So, I saw episode one of the MCU's new hot and hit show SHE-HULK. Wait for it... ->
„She-Hulk – Attorney at Law“ is the newest D+ TV expansion to the MCU. At this point, is there any point in asking whether this new addition makes sense in a broader worldbuilding context? Of course not. The MCU has long abandoned all pretense of some kind of unified worldbuilding making sense. We had our first parallel universe in Shang-Chi, but this had nothing to do with Loki and its Alternaverse shenanigans. Which in turn had nothing to do with No Way Home & Multiverse Of Madness. To say MCU’s phase 4 feels disjointed is an understatement.
And here comes the next thing, hot on the heels of the unbearable misfire Love & Thunder. Mind you, this is just a review of the first episode and not the entire show. That will follow. As it stands now, we have a good working hypothesis as to how things will develop from here. The tone the show is setting for itself is quite clear: „Fuck the MCU, we don’t take any of that seriously.“ Straight from Love & Thunder’s playbook, you now get to see the Hulk lain to waste. Not just once, but throughout the whole episode across the She-Hulk origin story.
You see, Jen was fine. Then she got into a car accident. Then his blood accidentally dropped into her slashed arm. What bad luck! In the comics, Bruce decides to give her a blood transfusion after the accident to save her life. But the new MCU couldn’t be bothered to just adapt this origin story. Because it would mean a man saving a women. Can’t have that these days. So the show changes it to: Jen saves Bruces and accidentally gets infused with Hulk blood. He’s got no agenda in any of this, he’s just a prop. Just right, eh? That stupid cis-hetero white male. Why does he have to be a part of this story to begin with? Why does She-Hulk even exist instead of the all-female Avengers that was threatened during that particular Endgame team-up moment? 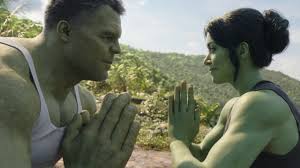 Okay, let’s see what She-Hulk’s got. She was a well adjusted lawyer. Now she’s a green rage monster. Ripe ground for drama, no? NO! The show just drops all of this because, you see, Jen can control her anger from the get go, in contrast to Bruce. Why? Because she’s… wait for it… a woman. And women have to deal with ‚anger management‘ everyday, you see. They’re being catcalled and mansplained to. Which is of course WAY worse than anything Bruce ever made it through. Like:
a) being suicidal due to his condition
b) almost being killed by his girlfriend's dad
c) being a fugitive from the law and basically from himself
d) having to lose his two loves due to Hulk performance issues and...
e) going through the trauma of being auto-hulked by Wanda, being the Hulk for years and not knowing whether he'd ever change back, and losing to snappin‘ Thanos.

And Jen has the audacity to stand there and say: I got it worse because I get catcalled. NO. It’s pointless to do oppression olympics in the MCU where EVERYONE’s got a rough deal. What are you gonna try next? Arguing how Jen’s suffering is so much worse than the Vision’s suffering who had been killed twice over? Jesus Christ, Jen, shut the F up. And I don’t mean this in a ‚woman, shut up‘ way. To the contrary. If Jen would’ve told the exact same stuff to some random bar stranger, it would’ve felt down to earth. I would’ve applauded, same as when Cavill-Supes took out that creep‘s truck (even though that scene remains a subject of debate). Bad dudebros need to be put in check. There’s no doubt about that. But maybe don’t just lump everyone in there? A smart screenwriter would find a way to single out toxic masculinity without going for these broad ‚hrrm hrrm, all men so so superbad‘ take. Like WW84. It does a disservice to the agenda.
And in that bad modern tradition, the show doesn’t hold Jen’s everyday sexism experience against other male, more oblivious everyday experiences. Instead it tries to use it to downgrade the collected traumatic life experience of THE EFFING HULK. How? Why? Did no adult ever check into that writers‘ room? How come that no one over there stood up and said: This is a bad idea, we should attempt another approach? Oh well. Just another failure in the MCU D+ scripting department. So, is there any saving grace to to this? According to the showrunner, the pilot episode’s most important scene is when a bunch of hyperactive girls & a trans guy show up in a bathroom to give an obviously beat-up Jen a make up do-over rather than calling the police… I don’t know what to say here anymore. I guess the scene is important in terms of trans rep?
They should either find a way to integrate trans themes into the story, or cut it out entirely. But nooo. Instead, we got this performative sludge. It’s such a dereliction of storytelling duty in favor of some weird sense of progressive masturbatory practice. LOOK, WE GOT TRANS PEOPLE: THIS OVERRIDES OTHER CONCERNS! Oh, good for you. But this is putting everyone else to sleep. This show is mainly concerned with meta-textually shielding itself from criticism. So why should I engage any further? SHE-HULK is about the worst phase 4 has to offer now, and that sounds nihilistic, coming after the mindboggling nonsense of Multiverse Of Madness & Thor 4. To cap this off on a positive bit: Ms. Marvel has been the best p4 outing so far. Just solid, grounded character work. Something that is missing from the rest of recent MCU outputs. Hear me: I wish more future MCU (including theatrical releases) would be like Ms. Marvel. This is where we’re at now. 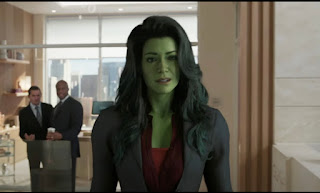