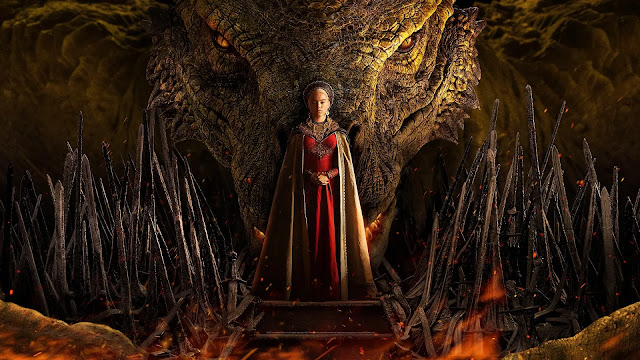 Written and Reviewed by Jan

At last, we’re there: New Game Of Thrones content. And if there’s one thing for sure, it’s this: HBO made the correct choice in doing this show – at least in terms of success. Apparently it was the most watched premiere in HBO‘s history. Despite many audiences going in with a hefty dose of skepticism after being burned by GoTs final two abysmally bad seasons, it’s clear there’s still much hunger for more stories in the world George R.R. Martin built.
And indeed, the premiere offers many of the aspects that made early GoT so great. Like morally grey, conflicted protagonists and their rogue family members making everything so much worse, while conspiracies are spun in the background. House Of The Dragon doesn’t reach the heights of early GoT here – cast your mind back to how instantly endearing Ned, Catelyn, Jon, Arya, and Tyrion were, and how thunderously well written the backs and forths between Varys and Littlefinger were – but it comes close enough to get a solid pass. 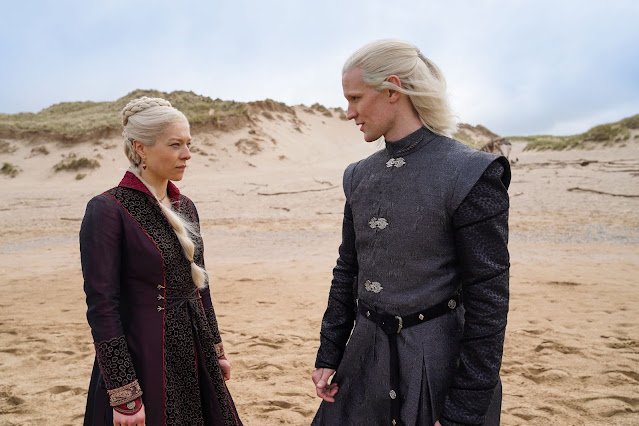 We kick off some 170 years before GoT and follow the fates of Danaerys‘ ancestors in King’s Landing. We got three main players. First is Targaryen baby girl Rhaenyra (Milly Alcock), daughter of the King, who isn’t considered an heir to the throne because she’s a woman and there has never been a queen before. She is okay with that because she’s not ambitious; she enjoys other things in life. On the other hand, she’s resentful of her father for being so focused on fathering a son… as if a daughter was somehow less worthy of his attention. 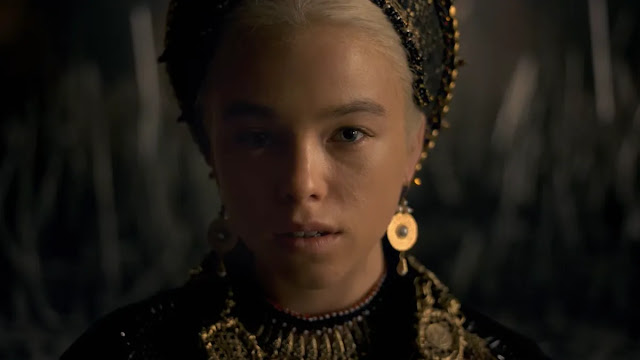 Rhaenyra is a fully fleshed out character from the get go. She’s childlike, as we see in the scenes with her chambermaid. But she’s also disciplined, like when she has to endure a terrible loss and remains composed nonetheless. She’s witty, as demonstrated in dialogues with her violent uncle. And she wonders if she had better been born as a boy, even if that would mean much more weight on her shoulders. Her father then is our second protagonist. 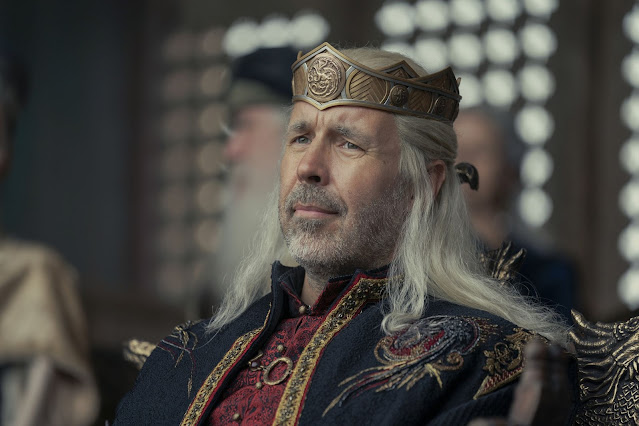 He is King Viserys, first of his name, and he’s got a problem. He needs to produce a male heir in order to guarantee an easy succession once he eventually dies. So far, he’s produced one daughter Rhaenyra… and a bunch of miscarriages. There never was a queen though in King’s Landing and this being an horrifyingly sexist medieval world, such a choice of succession might ruffle too many male feathers. The other option would be his younger brother, be that choice would be also contested for different reasons. Now his wife is pregnant again and much is riding on how that turns out. Interestingly enough, Viserys is both a weak and strong king. He is wise and does have a better heart than many rulers before and after him. But he’s also about to lose control on the political situation thanks to his and his wife’s ‚failure‘ to produce a male heir. 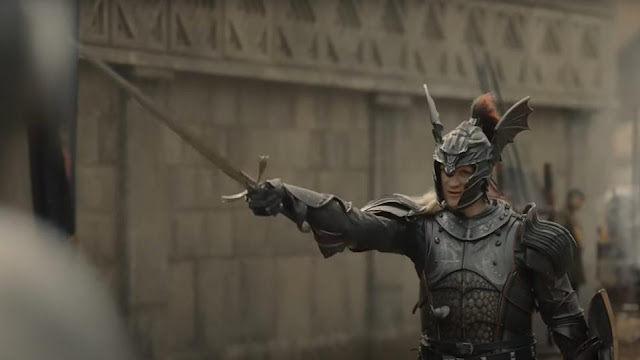 And he is unable to reign in his violent younger brother – and Rhaenyra’s uncle – Daemon (Matt Smith), currently being employed by the court as commander of the City Guard. Daemon slightly reminds me of The Boys‘ Homelander. He is sadistic and out of control, but he obviously has two vulnerabilities: He believes in family bonds to a fault and is angry that he’s not long been made Hand of the King. Instead he’s been kept at a distance from court because he’s seen as a wild animal. He doesn’t like this. And he also doesn’t like becoming impotent to a degree and having to abandon sex with a prostitute because he can’t bring it anymore. He’s a loaded gun with insecurities galore, and Smith brings the tension whenever he’s on-screen.
All three main players are set up as conflicted characters which much potential for further exploration over the course of this first season (and thanks to the premiere’s viewership numbers, a second season is all but guaranteed). Which is more than we can say about most new genre shows these days - looking at you, MCU D+. Establishing interesting new players of The Game in a very familiar world, that’s no easy task. The premiere does well. 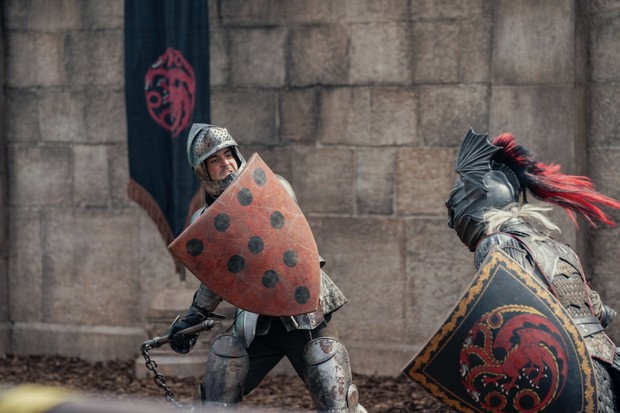 And that already familiar world is still as violent as we remember it from GoT’s better days. There’s a tournament with some gruesome death scenes. But then there’s another death scene that is almost as harrowing as anything GoT ever threw at us, from Ned’s death to the Red Wedding. This is seriously disturbing stuff and I’m surprised the premiere went as hard as it did. It appears House Of The Dragon wanted to make this clear as day from the get go: „We still got all the gore and the shock and the awe!“ Well, they certainly made their case with this particular scene. And it’s not just violent but absolutely heartbreaking in terms of character drama.
More akin to later GoT is the production value. This show had a big budget from the start, and you see it. The show looks good, with careful set & costume design as well as polished VFX (mostly concerning panorama backgrounds and of course dragons). That’s refreshing to see after so much greenscreen and Volume shooting on many other genre shows, from Marvel to Star Wars. Hey, a show with some shooting effort being put into it. How about that?
At the end of these 60 minutes, House Of The Dragon has laid a solid foundation for the rest of the season. Time will tell whether it can keep that level of craft – the high production value is guaranteed, quality writing not so much. So far, all good. 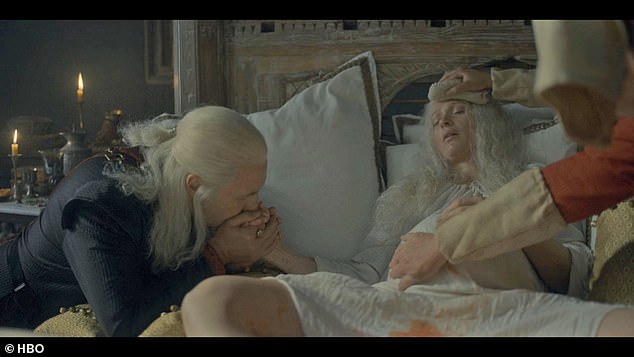 If there is one thing I wish the show would get more nuanced with: Don’t make all men pathetic and all women awesome and/or victims. Yes, this show does portray a brutally patriarchal society and the show would be weird if it was to ignore this aspect. And there’s some hefty stuff here, like Rhaenyra’s laboring mom telling her how the labor bed is the women’s battlefield and how Rhaenyra will have to endure this soon too. Holy pep talk, Batman! Then again, men had is equally worse in different ways – as is clearly demonstrated when an innocent peasant literally has his balls cut off for the sin of being at the wrong place at the wrong time. He’s just an extra though. This world clearly has both men and women suffer at the whim of cruel tyrants. So far, it’s exclusively interested in female suffering though. That doesn’t ring true, especially since GoT had that balance figured out from the get go. Despite problems with the at times exploitative nature of GoTs sexual violence scenes, it also had male underdogs we loved to emphasize with and who also suffered greatly, like Jon or Tyrion. House Of The Dragon should take note of that. 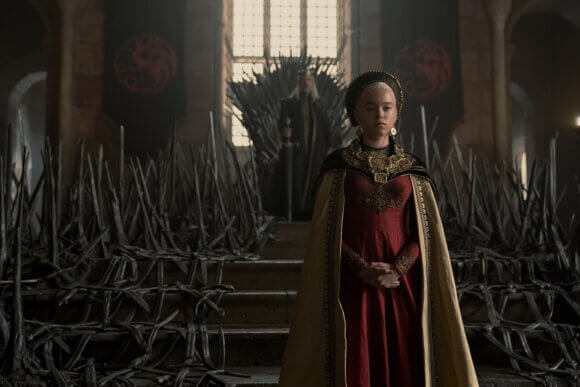