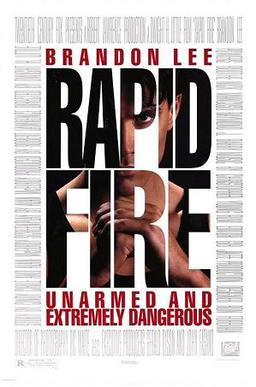 While actor and martial artist Brandon Lee will always be synonymous as being the son of Bruce Lee, it was his official solo outing in 1992’s Rapid Fire, which helped to propel his status as a major contender within Action Cinema. Written by Alan McElroy (HBO's Spawn) and directed by Dwight Little, Rapid Fire at its core, sounds like a throwaway concept involving the reluctant hero caught in between an impending gang war, but on the contrary, there’s more to the plot that sticks to landing. 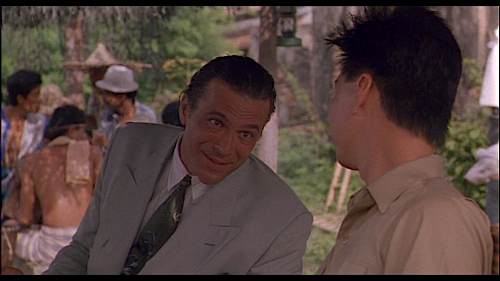 The film begins with mobster Tony Serrano from the Chicago branch of Cosa Nostra (As in the Sicilian Mafia, of course.) paying a visit to his old acquaintance Tommy Tau in Thailand, who is responsible for his role in the heroin distribution trade. A desperate Serrano who has lost his grip via previous drug raid busts, demands control of Tau's operation but unfortunate for Serrano, his "offer" was quickly refused thus begins the war between two factions, with our protagonist, 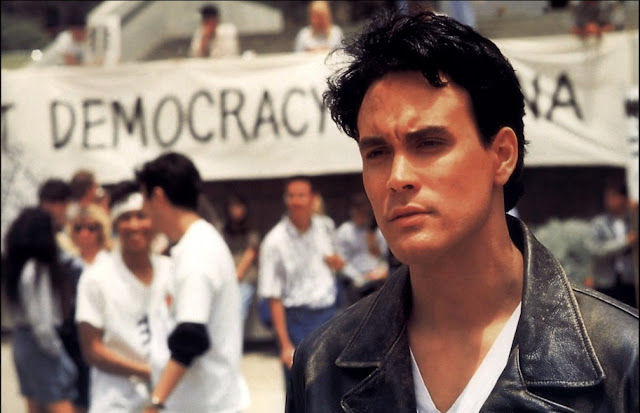 Jake Lo (No relation to Game of death’s “Billy Lo.”) who's cynical about having a righteous cause and political activism, after witnessing his father's murder under the tanks of the Chinese military in Tiananmen Square. Jake is then tricked into attending some Chinese activist gala and bears witness to the Fundraiser's organizer and Tau's number one distributor, Chang, getting whacked by Serrano as a means of retaliation. And with Mr. Lo being a sketch artist, doesn't win out in his favor as he can easily describe Serrano pulling the trigger and finds himself running and fighting for his life against the Mafia and the Law!
This was one of the many films of its genre that had me immersed without any esoteric plot device or meta, instead, Director Little's actioner runs at a steady pace within its 95-minute mark with, for the most part, shows no signs of tedium, thanks in part to the copious amount of gun fights and over the top martial arts scenes.  They even provided an explanation of why Jakey is so proficient in combat sans the former cop or ex-Military specialist trope that's been done 1000 times ten in action films.
Rapid Fire also has its share of witty dialogue with quotable lines, for example when Jake was coerced into testifying against Serrano.
Jake: "That's blackmail!"
Cop: "That's Law enforcement! "
And then there's some politically incorrect jokes, with Jake feeling hungry when being holed up in what seems to be a witness protection hotel, and one of the police officers respond," We can send out for "Chinese", if you like."
Of course, there's plenty of explicit language such as, “Shit” “son of a Bitch” and “Piece of shit” however, the "Fists of Fury" callback, was well executed. 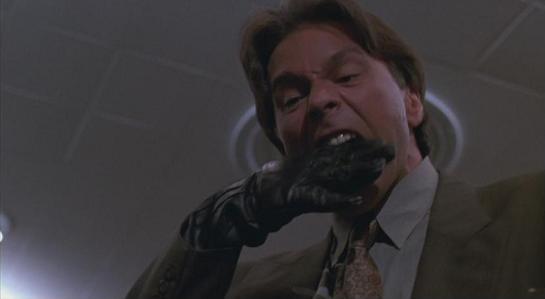 Nick Mancuso does a good job at portraying a charismatic Italian crime boss in your usual "bada bing" archetype but it's unfortunate that his role was somewhat short lived, especially after he was propped as the main baddie in this film. 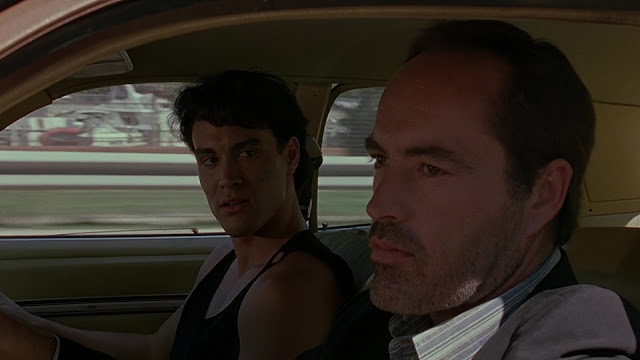 Powers Boothe as Lieutenant Mace Ryan of Chicago Narcotics division, has his share of action scenes, when not coming off like your gruff "Nick Fury" and ironically, Lo sees his father in him. And speaking of Lo, there's our leading man Brandon Lee, who punches, shoots and kicks his way through a barrage of bullets and fisticuffs.  He's convincing as the right man, at the wrong time character. As Jake, there's enough humanistic ethos that makes him relatable and not some one-dimensional hero who never breaks a sweat. Looking at you, Steven Segal! 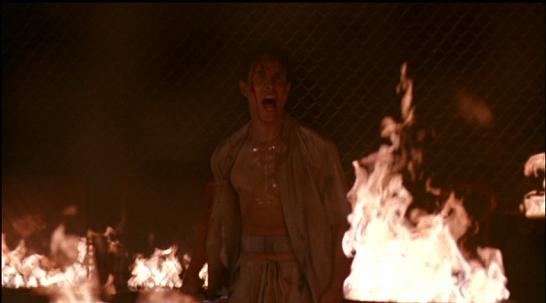 As far as his martial arts scenes goes, there were quite a few that are still impressive even after thirty years. One that stood out the most, was Lo’s dialogue-free fight against Tommy Lau's henchman, that gives a miniboss vibe. There was barely three takes or cut and paste like those Taken films. Lee personally choreographed most fighting sequences while implementing his father's signature Jeet Kwon Do style. Lee incorporated certain moves from the classic John Woo films, The Killer and hard Boiled as a homage to the action director. Brandon originally wanted Woo to direct Rapid Fire, however, the studioheads wanted a film that showcased Lee’s martial art talents as opposed to “Gun Fu” flicks. 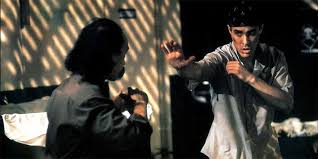 Rapid Fire is so much formulaic as your standard buddy cop movie but there's an unquestionable modicum of familiarity to the earlier flicks such as, 48 Hours, Above the Law, and Code of Silence among a few other notable contemporaries thus making it the last mantra of the beloved 80's action films of old. I can tell how Composer Christopher Young's soundtrack was inspired by James Horner’s 48 Hours as well as Commando during certain high tense moments with some harmonica thrown in for extra seasoning. 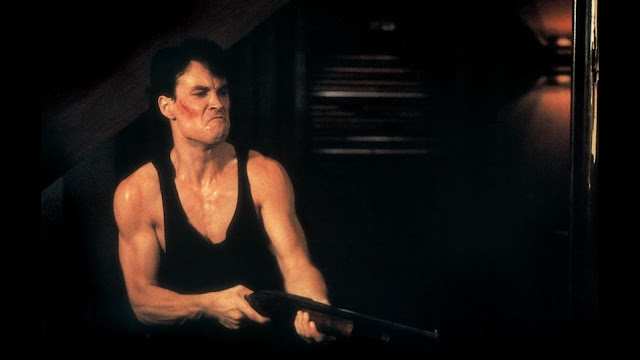 Tau smuggling heroin through his laundry business comes off as yet, another outdated stereotype, especially in today's social climate but overall, I have a soft spot for Rapid Fire.
Lo's character arc wasn't too squandered regarding his disillusionment to do what's right, and Brandon has much more of a dynamic presence, than his previous filmography. The supporting cast lends much to the film's credibility that goes a long way for what may be looked socks., at first, as some generic crime drama with a heaping dose of chop socky. 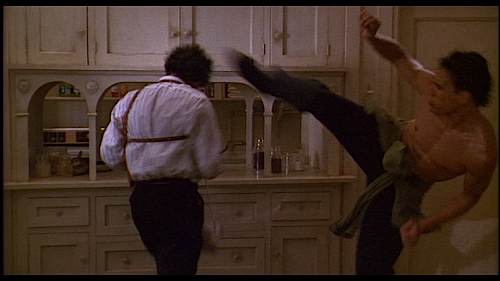 Of course, I would be remiss had I not mention how unfortunate that we lost a great action star, whose life was way too short as with his father. Not to mention that it was Brandon's last completed film. (As many of you may know, Chad Stahelski of the John Wick films and friend of Brandon, had filled in for Lee as Eric Draven, after his tragic untimely death on the set of The Crow.) I can't help but find myself thinking, "what could have been. " 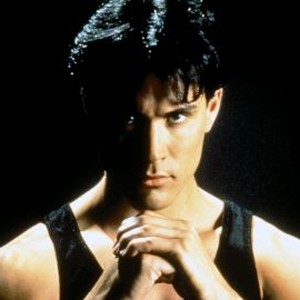 Rapid Fire is available on Starz
Brandon Lee It came from the Nineties! Martial Arts Men of Action Overrated or Underrated Rapid Fire The Crow