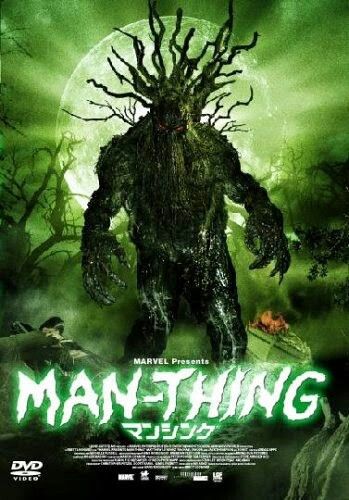 So, I watched 2005's Man-Thing on Tubi the other day, and suffice to say, there were more than a few problems with this film. Based on the obscure Marvel character that debuted over 50 years ago, this Avi Arad produced low budgeted adaptation, involves the mystery of gruesome murders within the forbidden swamps of where else, Louisiana! 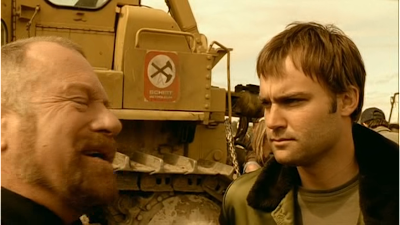 Oil company Tycoon, Fred Schist  constructs a Drilling rig within the heart of Native American sacred land, called Dark Waters. Schist will do anything to preserve his company's soiled reputation the extent of homicide, after facing problems from upstart protesters and a pesky Saboteur. So, in comes Kyle Williams, a replacement Sheriff who after several people have been missing including a previous Sheriff. 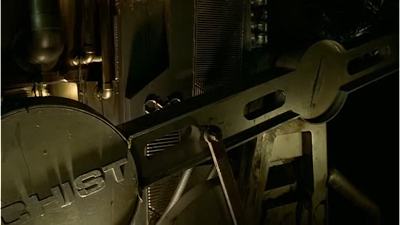 Meanwhile, Rene is attempting to destroy the rig, due to violation of the sacred land. With Williams' involvement of who could be behind these ominous occurrences, theorized by this supernatural "Guardian Spirit" can he prevent the humanoid plant like behemoth from killing those who trespass Dark Water?!? 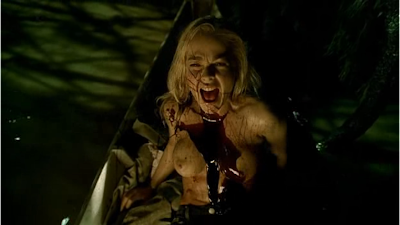 Ok, now that I got the synopsis out of the way, this low budget production is generic if not formulaic as in part monster, part slasher i.e., Jason Voorhees, but instead of guarding Crystal Lake, it’s the swamp! During the prologue, there's this couple getting it on in a canoe, during the Dark Waters only for one to "come and go!"  It's a scenario that was influenced by the early Friday the 13th films. 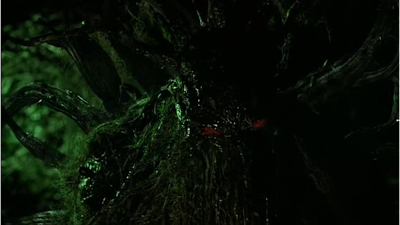 Despite some minor fan service to the source material aka the comics, this adaptation of Marvel's strangest hero, antihero, or whatever, was nothing more than a CGI slasher film with its titular character who is presented as some boogeyman. The effects both CGI and practical, was satisfactory for a B flick, which I can deduce that more money was put into the creature's aesthetics than experienced actors and set pieces. The drill looked like a giant prop leftover from some Canon Pictures movie. 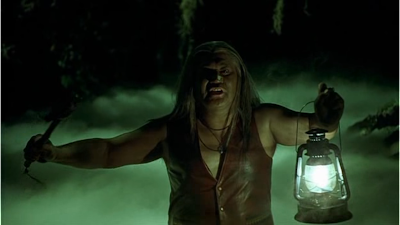 The movie for the most part is different from the comics other than a Ted Sallis (Man-Thing) reference here and there. However, I admired the revelation that he was murdered by Fred Schist and buried within the mystical waters because he refused to sell the land to Schist.
To be honest, I prefer this explanation over its comic roots, by ditching the usual science-based origin, which was also used in DC's Swamp Thing but that's where the accolades end. 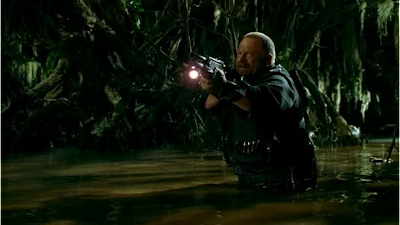 In my opinion, there should have been a nice payoff during the 3rd act where Schist hires mercenaries to go after Williams and his love interest, Teri Elizabeth Richards to further cover up his tracks, instead, he goes alone, knowing that there are bodies and disappearances within the swamp.  Does that make any fucking sense? 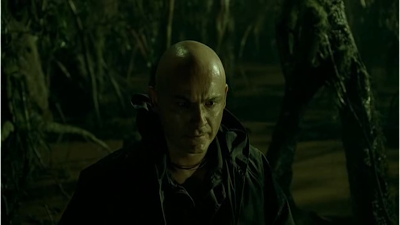 Of course not, as with this movie! Arad could have went all out with having Man-Thing dispatch Schist's armed mercenaries utilizing Braun, plant manipulation, or his corrosive touch that can burn his enemies once they show signs of fear. But “noooooooo,” instead they make it all about Rene who has survivor’s remorse after agreeing to sell the land to Schist after Ted’s “disappearance!”
Rene's selfless act may have made him the redemptive hero toward the end, but overall, another wasted effort. 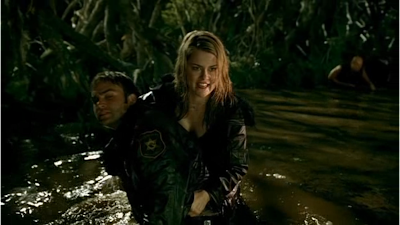 Although this film gives an idea of what Man-Thing may look like onscreen, it falls short thanks to janky pacing, and main actors who for the most part, look like thespian class dropouts. (Alex O'Loughlin, later went on to do other projects like DX's The Shield and the Hawaii Five Oh reboot.) And to make matters worse, the production is comparable to a fan made project but with a slightly bigger budget. 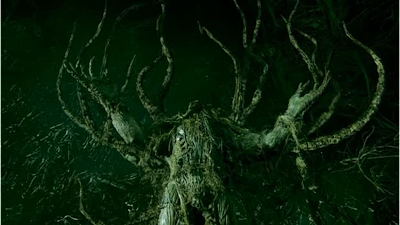 This could have been something worthy in better hands, instead, it’s more "Meh-Thing" than Man-Thing. Well, at least the Nu metal outro theme was cool. To be honest, with a bigger budget, better storyline and seasoned actors, this could have been something great. Like Avi Arad's answer to 2003's Hulk, in regards to Monster heroes, but as it stands ,I would rate over the lower budget Marvel films, such as Corman's Fantastic Four, Albert Pyun's Captain America, (Not that much.) but certainly not better than Punisher (1989). Man-Thing is a great horror concept which preceded Swamp Thing and hopefully, there will be a remake soon as he deserves so much better than this.
About Man-Thing
1970 was the genesis of what would be labeled as the Bronze age of comics, where both writers and artists were allowed to branch outwards with bold concepts that stood outside the norm. 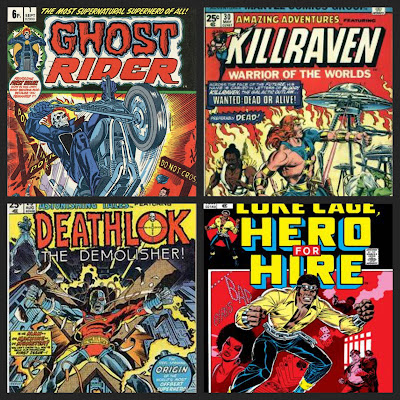 Characters such as Luke Cage, Mobius, the Punisher, Ghost Rider, Moon Knight, Killraven and of course, Deathlok the Demolisher were among the many newer creations that didn't adhere to your archetypical Superhero like Spider-Man, Fantastic Four or the Avengers. No, they were dynamic if not "Dynomiiiite!" (Seventies pop culture reference.) So, enter 1971 that introduced "the startling Swamp creature of all" Man-Thing! 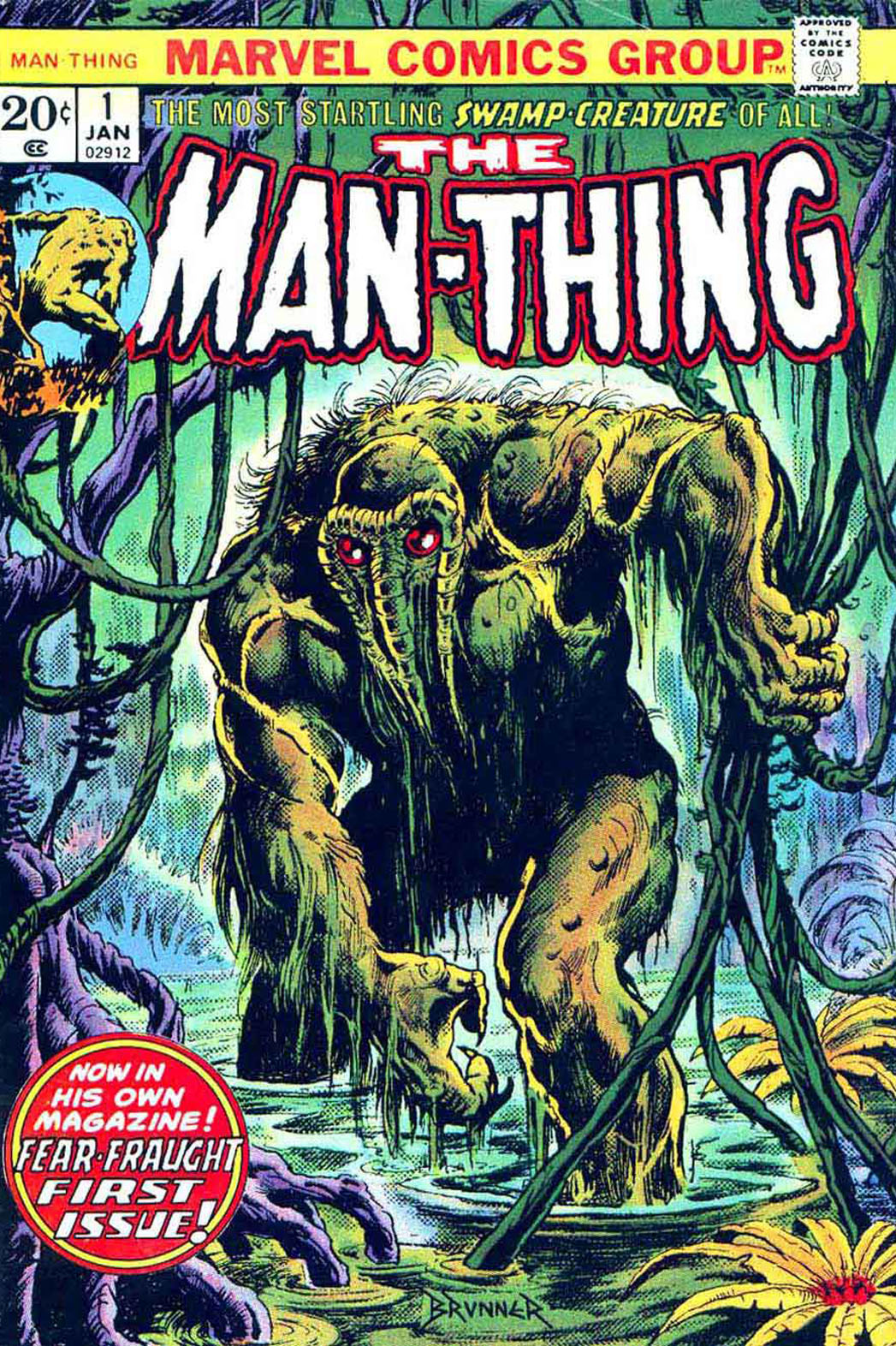 Created by writers Stan Lee, Roy Thomas, Gerry Conway, and artist Gray Morrow, the character had made his debut first in Savage Tales #1.

Featured biochemist doctor, Ted Sallis who feverishly worked on a recreation of the super soldier serum, the same one that granted Captain America, his superhuman abilities. When the hi-tech terrorist group Advanced Idea Mechanics (A.I.M.) tried to get ahold of his notes, Sallis had destroyed the files, and fled with the only sample of his formula, which he injected it in himself. After crashing his car into the swamp, the serum and swamp energies turned him into a creature infused with the swamp’s ecosystem, what was Ted Sallis, is now a muck covered creature with glowing red eyes, devoid of any intelligence and memory yet he is gifted with superhuman strength, Chlorokinetic regeneration and empathic senses which the creature responds only to negative emotions, then enabled its touch to burn anyone who shows fear in its horrific presence. 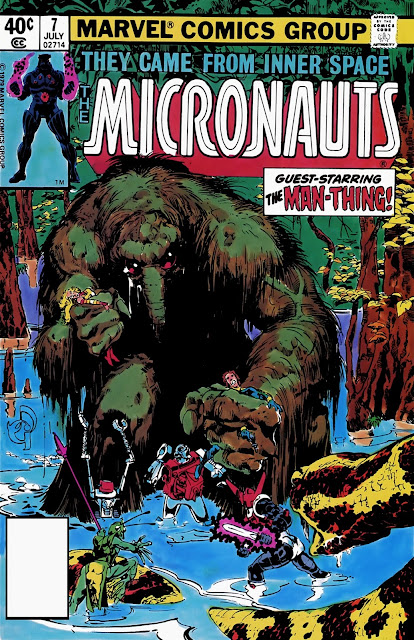 Throughout the decades, Man-Thing made several appearances outside of his comics, from his affiliation with the Legion of Monsters lead by Ghost Rider to encountering the Micronauts, and even forged a friendship with Howard the Duck.

Ranked at #7 of Marvel's top monster characters, Man-Thing is a major contender of Supernatural Comicdom. 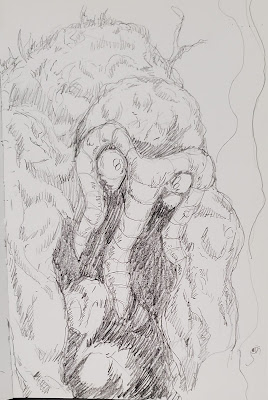