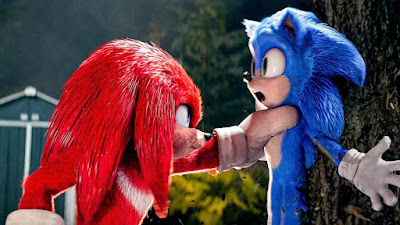 It's been two years since the live adaptation of SEGA's infamous marsupial, Sonic the Hedgehog arrived in theaters to a very positive reception, proving that Videogame based films can be as marketable as Comicbook intellectual properties. If done right, of course! So obviously, a sequel was greenlit and now, we have Sonic the Hedgehog 2! 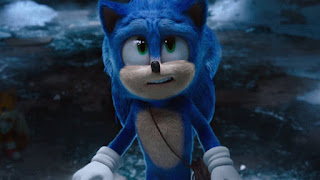 Ben Schwartzman returns (voiceover wise) as the snarky and speedy anthropomorphic Hedgehog who teams up with Tails to locate the Master Emerald which serves as the McGuffin
before Dr. Robotnik (Jim Carrey) and this time, the evil mastermind forms an alliance with Knuckles the Echidna (Idris Elba) who serves as both a rival and threat to our heroes. After Sonic gains a newfound family, Tom and Maddie Wachowski, and saves the world from Dr. "Eggman" Robotnik, he continues playing "hero" by stopping a getaway truck commandeered by bank robbers, and in reckless abandon, he succeeds in foiling the criminals' plans. Sonic's celebration is short-lived as Tom gives him the "with great power, comes great responsibility " type speech before heading off to Hawaii for Maddie's sister's wedding. 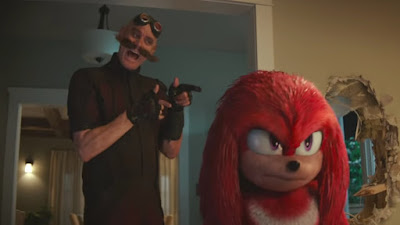 Sonic's Home Alone fun is interrupted by Dr. Robotnik and Knuckles who demands the mystical green emerald and the honor of killing Sonic for his extinct tribe. So just when things get dire, in comes Tails with his "tailicopter" to save his blue hide from being blackened.
Tails the tech whiz, informs Sonic of the jeweled McGuffin and how they must locate it via his map in order to prevent Doc Robo and Knucklehead from getting their knuckles..."hands" on the powerful jewel. So that's where the fun begins. 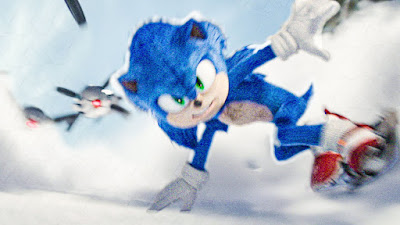 Despite some minor pacing issues, and unnecessary story elements, Sonic the Hedgehog 2 is a worthy sequel to the 2020 film and in some ways, it’s even better!
Both CGI and action sequences, have been dialed up especially during the snowboarding scene with Sonic evading Robotnik's missile equipped drones while doing moves that even Shaun White is incapable of pulling because, "physics!" And of course, there's plenty of fan service for the Sonic fans out there, but it’s the humor that makes Sonic 2, a must watch thanks in part to Jim Carrey's batshit performance as Robotnik who gives memorable quips like "Dis is how I roll!" and strutting to nineties thrash band, Pantera’s “Walk!" Aside from Schwartzman, Carrey, carries the movie as his presence is guaranteed to get a few laughs.
There's on pop culture reference about not wanting to die by a giant boulder as its too "derivative," which of course is a subtle dig at Raiders of the Lost Ark, which was distributed by Paramount studios in conjunction with Lucasfilm. 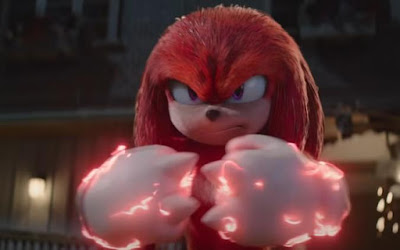 Idris Elba is great as Knuckles, who is obviously tricked into allying himself with Robotnik. Stoic, yet naive and understandably so considering his backstory. It’s funny how the CGI brings these pixelated characters to life be it the interactions or how they emote. Knuckles despite starting off as a villain, was likeable from the start. And as of this writing, will get his very own Spinoff series! As with Spider-Man, Sonic delivers some clever taunts when going up against his adversaries. The "Professor X crossed with Monopoly man" was one of the more inventive jabs at Robotnik's expense. But seriously, I haven't laughed this much for a PG Comedy in over two years, that's when I saw the first Sonic in theaters prior to the big Covid lockdown!
Now, there were some cheesy dialogues about the importance of family and Sonic's existentialism which carried over from the first film.

But after all, it’s still a family-oriented story that gives a modicum of lip service to the kiddies. However, there were a few minor unsettling scenes such as Knuckles' tragic backstory of how he became the last Echidna of his warrior tribe, or how Sonic nearly drowns to death, sure the latter was a callback to those underwater levels from the games, but damn that was a bit serious! Tom played by James Marsden (You know, the actor who was underutilized as Cyclops during the X-Men films.) shares some of his time in the spotlight despite being overshadowed by newer entries like Knuckles, Tales and to a lesser extent, Rachael played by Natasha Rothwell. (White Lotus) The Hawaii and Serbia scenes is where some of the film has problem with its pacing, but overall Sonic 2 gets back on track afterwards. And what’s with Agent stone’s infatuation with Robotnik? Are we going into uncharted territory as in Agent Coulson’s crush on Steven Rogers? Ah, allow me to digress a bit.

Now as for the third act, immediately drew a few comparisons between Sonic when he goes into "Super Saiyan mode" and Adam Warlock's revenge against Thanos and when you throw in the Emerald that breaks apart into "Infinity stones," there's your recipe for an homage, be it unintentional or not. I dunno, could it be more than a coincidence when you watch the post credits that mimics 2017's Guardians of the Galaxy vol.2? 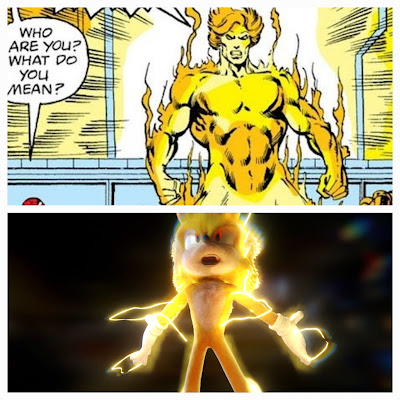 In closing, Sonic 2 accomplished what it was intended to do both story and entertainment the kids will find it both heartwarming and at times, heartbreaking while the grown-ups will chuckle at the inside jokes, easter eggs from the source material and of course Carrey's over the top performance.  The sequel is one of my favorite films of 2022 and unlike Resident Evil Welcome to Raccoon City, was another great videogame adaptation, insuring Sega and Paramount's credibility. Should that winning streak (pun intended) continue, perhaps we can get more projects based on the "Segaverse" like Altered Beast, Vectorman, Shinobi, Nights into Dreams, Panzer Dragoon, Space Harrier, Phantasy Star, and Afterburner since Top Gun is now the talk around town. Just as long as Uwe Bollshit stays the hell away from these properties since he ruined House of the Dead!
Sonic 2 is now available for streaming courtesy of Paramount Plus. "SEGAAAAAAA.." 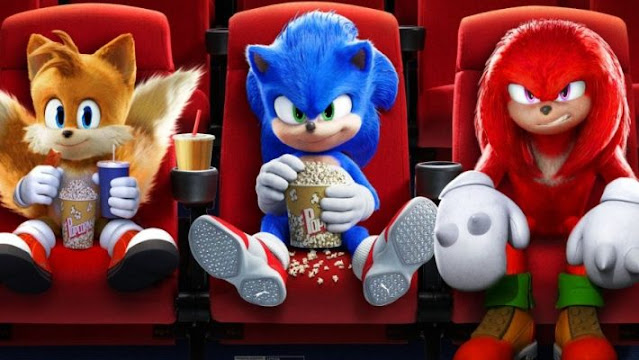