All of Us are Dead Review 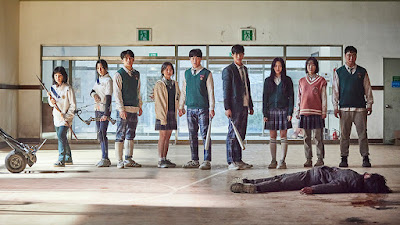 So, another year, another Korean thriller series?? Riding off the success of 2021's Squid Game, the streaming platform has a new binge worthy offering in the vein of Kingdom and especially those Train to Busan films!
Netflix's 11-part Zombie Apocalypse series, All of us are Dead, all seems normal within Hyosan high school and by "normal" I mean the usual on goings in school like bullying and peer pressure, until a student who was bitten by an infected hamster from the school's Science class, turns into a Zombie, causing a viral outbreak within Hyosan High, where the outnumbered survivors are forced to fight for their lives, when not fighting each other. 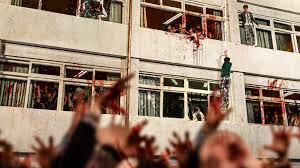 This series bares plenty of familiarity for diehard Horror fans who can easily recognize comparisons and tropes seen in previous films and games: 28 Weeks Later, Dawn of the Dead (2004), Attack on Titan, Train to Busan, High School of the Dead, Last of Us, and even Resident Evil!
For the most part the surrealism of how many would react during a Zombie epidemic, is credible to a fault, as in how to shit and piss during a Zombie outbreak. Each character has a mini story arc of their own and during the episodes, there were other story arcs outside of the Hyosan high kids, some tragic while others optimistic. 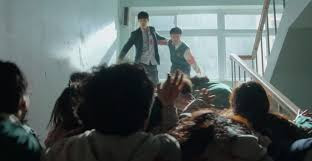 If anything, All of us are Dead's strengths aside from its colorful characters, stems from its meta as they tackle topical issues such as School violence, Sexual harassment, Government accountability, Class disparity, Teenage pregnancy, Suicide, Social media, Clout chasing, apathy and the Covid pandemic.
Despite them being trapped within the midst of a Zombie Apocalypse, the students of Hyosan high, still manage to develop crushes on one another only to constantly face the direst of situations where you never know what happens or who gets offed. As far as the characters are concerned, it’s not necessarily cut and dry or rather "cut and paste" when it comes to their background or motivations outside of survival. 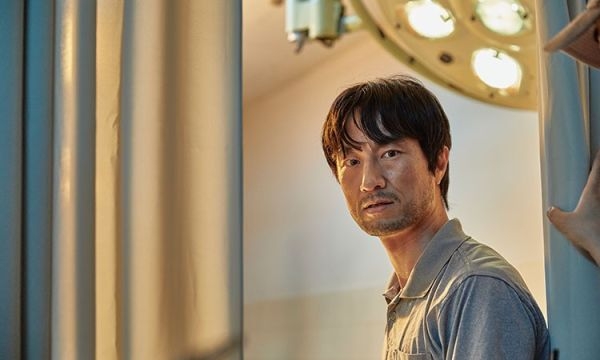 For example, Lee Byeong-Chan who was the mad scientist behind the pandemic, is not your usual mustache twirling villain, but a man driven insane after the loss of his son, who in turn was the catalyst behind his modus operandi to develop a mutagen called the Jonas virus, (no relation to the Jonas brothers) that goes astray yet, he feels that his actions were justified in the context of who is the real monster, them or us?
There were plenty of situations where my most liked characters were face with, that were dire as fuck to the extent of having me turn off the episodes, only to get back in due to curiosity. As with most if not all Zombie themed series or movies for that matter, don't expect most of the ensemble cast to make it toward the finale.

There is so much death and despair during the 11 episodes, that one can't help but feel extremely sorry for these characters and their often-dire situations. Choi Nam-ra and Cheong-sa, serves as perfect example of tragic heroes during the latter episodes, but for every hero, comes the antagonists. While Chan was wholly responsible for the Zombie outbreak, its apparent that his modus operandi stemmed from personal tragedy caused by bullies like Gwi-nam, who is this poster boy of Toxic Masculinity and becomes even more sadistic after being infected by the J-virus . I would go as far as comparing Chan to Resident Evil's William Birkin, while Gwi-nam is "Albert Wesker" especially after developing superhuman capabilities after being infected. And like Wesker's contempt for Chris Redfield, Gwi-nam has a mad on for Cheong-san to the point that there is some Cleganebowl resolution.
I can’t count how many times Gwi-nam gets thrown of the school's roof, or windows only to crawl his way back in his thirst for vengeance.  It's almost comical in a sense but keeps the viewer intrigued by what happens next. 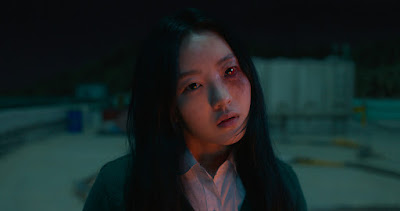 If there's one or two gripes, I have with AOUAD, is some of its slow-paced fillers, and the protagonists trying to help friends and family who are infected with the "J- Virus" even after they have completely turned. That's where the survival mechanism would kick in, like a fight or flight response, but "noooooo" some go above and beyond to provide aid to their loved ones even when they are attacked or attacking others. Could it be an extreme example of human compassion and denial but maybe that's me being a selfish bastid? But I digress. 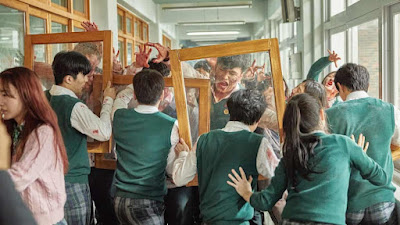 Overall, Age of Us is a solid hybrid Coming of age slash Zombie Apocalypse drama that easily eclipses the last few seasons of AMC's The Walking Dead and judging by the last episode, and the positive reception, I'm sure a second season is in the works. While it's not as good as Netflix's other Korean Horror series, Kingdom, "Age" delivers the goods, whether its horrific scenes, clever dialog or social commentary, this series, satisfies that Zombie content hunger!
All of us are Dead Drama Horror Made in Korea Netflix Zombies!!