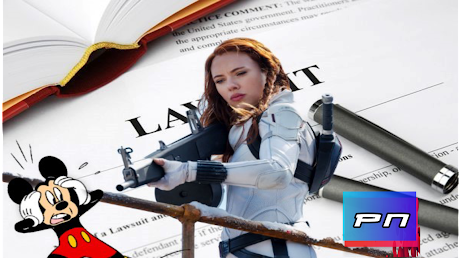 Masthead: Stalkeye
Beware, the Widow's sting! Scarjo is gunning for Mickey and co! (Figurately speaking of course.)
Black Widow and (former) Avengers costar, Scarlett Johansson had ignited a legal confrontation ala lawsuit against Marvel Studios' parent company, Disney opting to release Black Widow simultaneously in theaters and on their Premier Access streaming service.
Scarlett Johansson, who of course stars as the titular Marvel superhero filed the lawsuit today for a breach of contract in Los Angeles Superior Court, according to Ms. Johansson's attorneys, since the studio neglected to release the Avengers spinoff exclusively in theaters, the ticket sales suffered as with Johansson’s compensation which was tied to the box office reception of Black Widow.  Since it failed to hit benchmarks, the Actress' monetary bonuses would not "kick in".
Due to the Coronavirus pandemic, Major studios WarnerMedia and Walt Disney Studios, among a few others, have released their films, that were originally intended for theatrical release via streaming services like HBO MAX and Disney Plus respectively.  This practice albeit a temporary decision, has severely impacted financial returns of Studios and actors who may benefit from backend receipts. And to compound things further, some potential patrons of Disney's $30 Premier service may forgo paying the steep price and obtain the movie by illegally downloading share files. HBO MAX stands to have the bigger advantage with several dedicated subscribers at $14.99 Monthly.
"Disney intentionally induced Marvel’s breach of the agreement, without justification, in order to prevent Ms. Johansson from realizing the full benefit of her bargain with Marvel,” according to the suit.
However, a Disney spokesman said Ms. Johansson’s suit had no merit and is “especially sad and distressing in its callous disregard for the horrific and prolonged global effects of the Covid-19 pandemic.” Disney stated that it “fully complied with Ms. Johansson’s contract and furthermore, the release of Black Widow on Disney+ with Premier Access has significantly enhanced her ability to earn additional compensation on top of the $20 million she has received to date.”
Source: Wall Street Journal
Black Widow Controversy Disney Marvel Cinematic Universe Scarlet Johansson