The road to Marvel's success in cinema, has been paved with both goof and especially bad. For every Blade, Spider-Man or X-Men, there was a Howard the Duck, Captain America (1990), Roger Corman's Fantastic Four and Man Thing?? 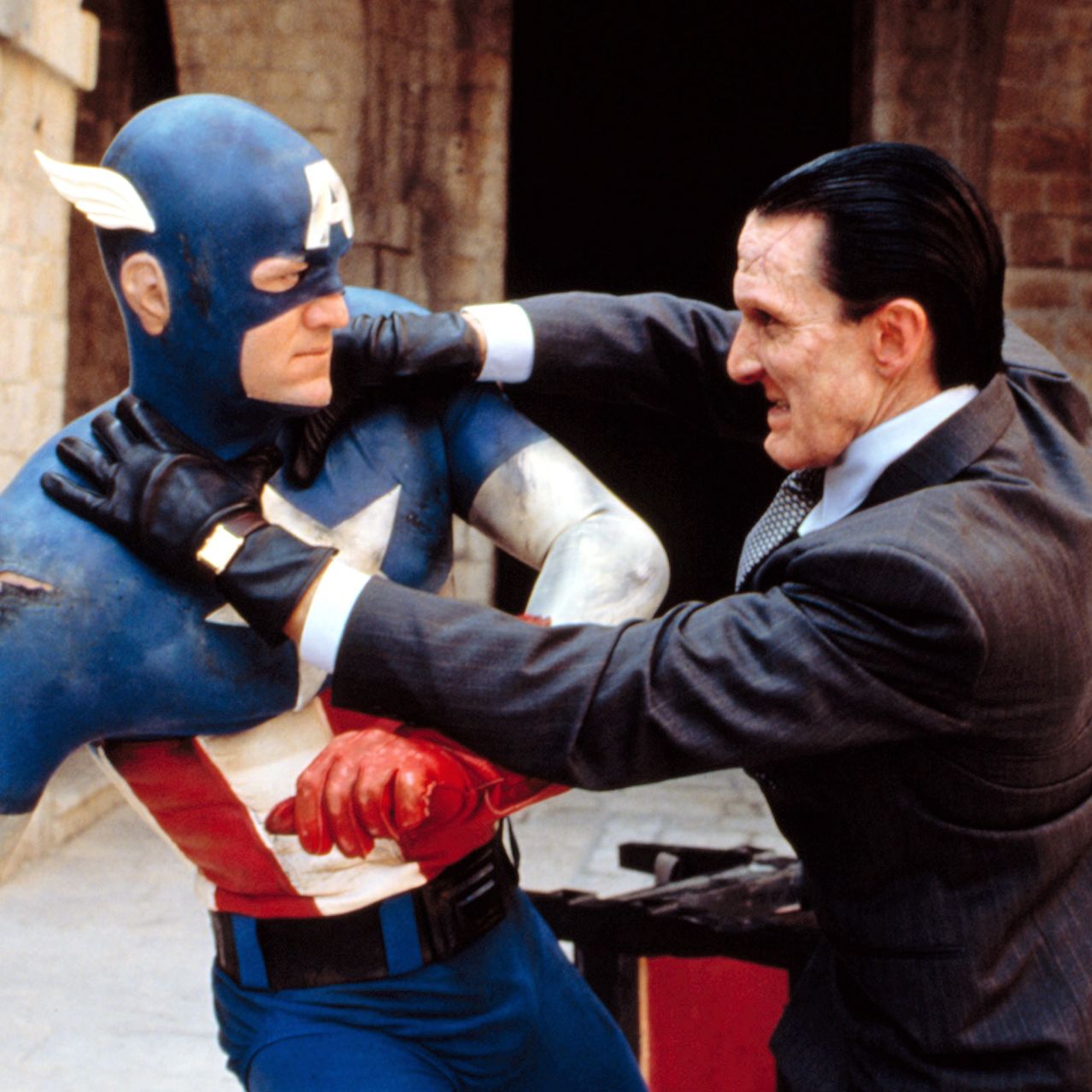 Sure, those examples were the bottom feeders of the bunch as there are other Marvel films that fall within ranks if mediocrity, but you know where I'm getting at.
After 2008's Iron Man broke through the gates further establishing the Comicbook company's cred-which began with 1998's Blade, the newly formed Marvel Studios greenlit more of their non mutant intellectual properties for film. Following Iron Man 2,  Thor and eventually Marvel's legendary flag draped Superhero would get his turn in the Spotlight! Directed by Joe Johnston, created by Joe Simon and the King himself, Jack Kirby, Captain America The First Avenger is more than a Superhero origin story, it's a tale of one man's courage of conviction and the hero underneath the symbolic star spangled shield and uniform-Steve Rogers.
This story does not waste its time when it comes to setting up the premise and pacing. Here we are treated to a prologue scene where researchers have discovered a man frozen in ice, leading towards how it all began.
Johann Schmidt aka the Red Skull is in command of Hydra, The Nazis' science division.  The Skull wastes no time hunting down the tesseract, a mythical artifact from the gods (See Thor) which he can harness its energy when producing destructive weaponry. 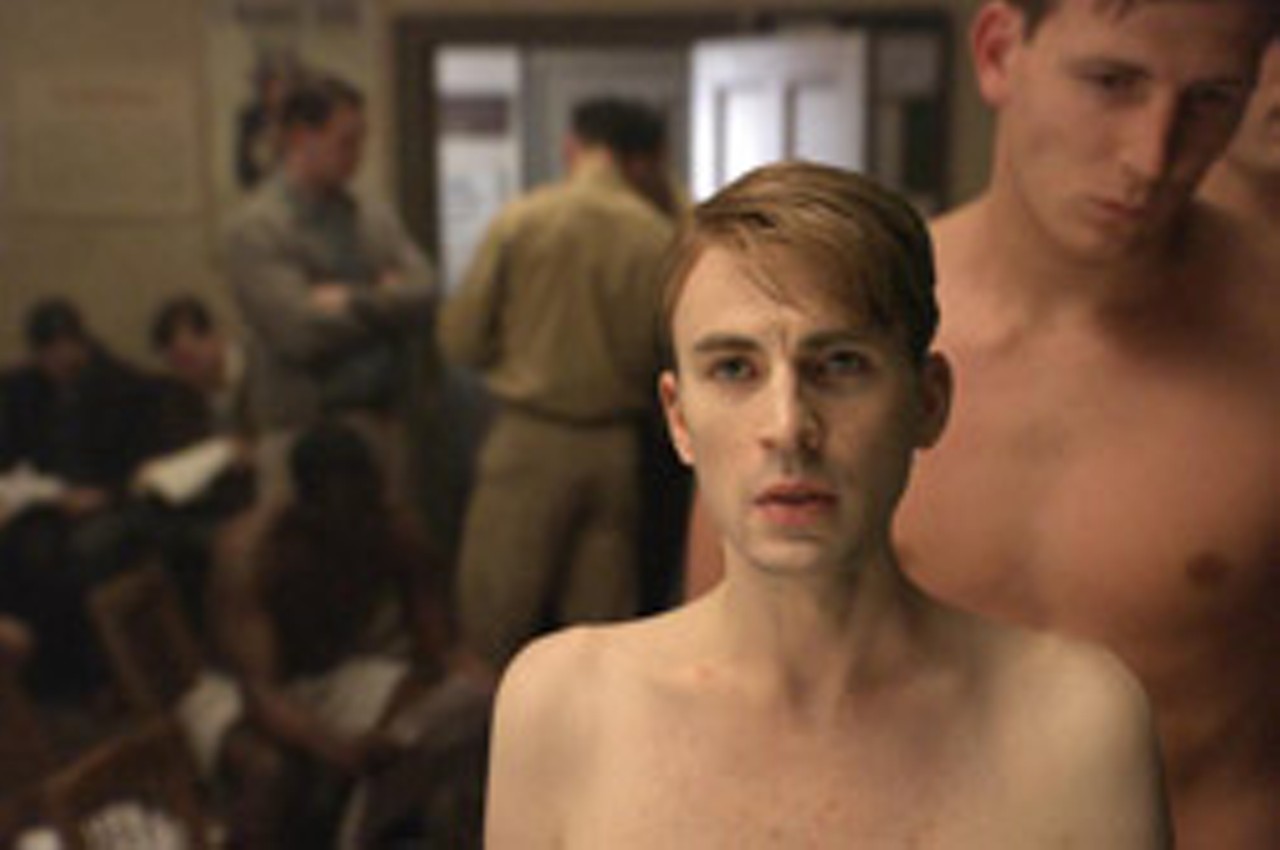 Meanwhile a frail and puny Steven Joseph Rogers, when not getting the shit beat out of him by the local bullies, or trying to enlist in the US Army, Steve hangs out with his "bff" James Buchanan Barnes who is sent off to fight against the Nazis. While going through basic training, Steve is picked for an experiment that he originally volunteered for regardless of the risks involved. Again, I am impressed at how the tone of this story, sets up a relatable scenario, when Rogers' unfortunate encounters with bullies, serves as motivation for becoming a Super Solider. Post  transformation, Steve struggles to gain control of his newfound superhuman abilities as demonstrated when pursuing Dr. Erskine's killer, whereas in the comics, it's an instant adjustment.

Unlike the comics' counterpart, Steve's journey as Captain America doesn't come easy, regardless of his capabilities, the United States government opts to have him as a War Bonds spokesman on a USO tour and what’s so devilishly clever about this scenario, was the dig at Cap's OG costume, where Rogers is wearing flanked by onstage chorus girls. The scene is hilarious because the costume looked too inappropriate for a movie adaptation, let alone going into battle against the Nazis and Skull's contingent. But I remember laughing hysterically when one of the G.I.s berated him with "Nice boots Tinkerbelle, now bring on the girls!"

This, along with learning that Bucky was captured was the defining moment of Captain America's grand entrance sans the outdated costume goes it alone to successfully rescue the American prisoners of war. As a result, he's instantly hailed as a hero and wins of over the respect of Colonel Phillips and officially assumes the rank and title "Captain America" who plans an attack on remaining Hydra bases,
but not without recruiting his own outfit (Howling Commandos) or taking Howard Stark's prototype shield, with a pissed off Peggy Carter giving the weapon her official "seal of approval “! 😆 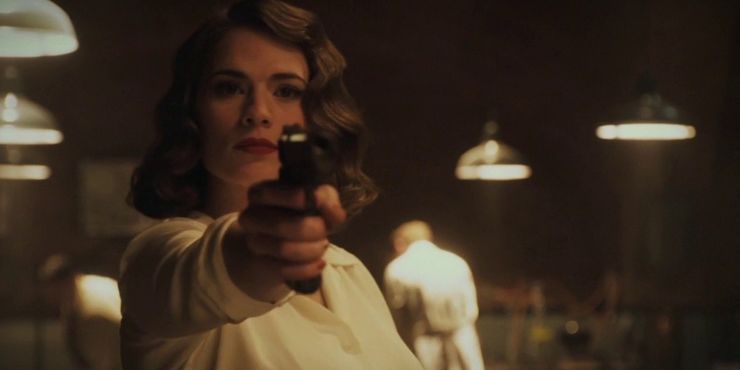 Steve's further heroics is shown in some montages which may be a minor gripe however, there is only so much you can cram within a two-hour movie. That said, the action sequences during the latter act, more than makes up for Cap's MCU debut.
Joe Johnston’s direction harkens back to those classic serials of old as previously shown from The Rocketeer. The set pieces and ordinance bear a retro futuristic aesthetic while Cap's daring heroics alongside the Howling Commandos, can easily be compared to the Indiana Jones films whether its the pulpy 1940s World War 2 setting or unapologetic violence, where we see Cap knocks out one unfortunate Hydra soldier into a plane's propeller. 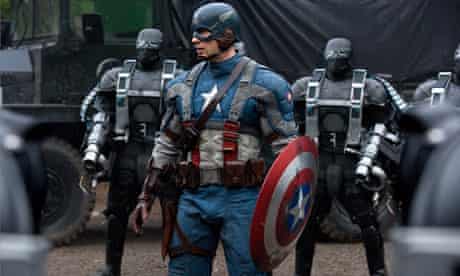 Also, to balance out the drama, were a good amount of humor, one line in particular, is Dum-Dum Dugan's reaction to Jim Morita, an American POW of Japanese descent: "What, are we gonna let everyone in?" Followed by Morita's clapback: "I was born in Fresno, California!" And who can forget Tommy Lee Jones' I'm not kissing you" comment?
The big gut check was the final communication exchange between Steve and Peggy, as he has no alternative, but to crash the Skull's Bomber into the ocean, making the ultimate sacrifice, while promising that dance. It was a great ending for one of Comicdom's greatest Superheroes when you see kids running through the streets with a garbage can lid resembling the infamous shield. But it doesn't end there, because "post credits", leading to something much better! 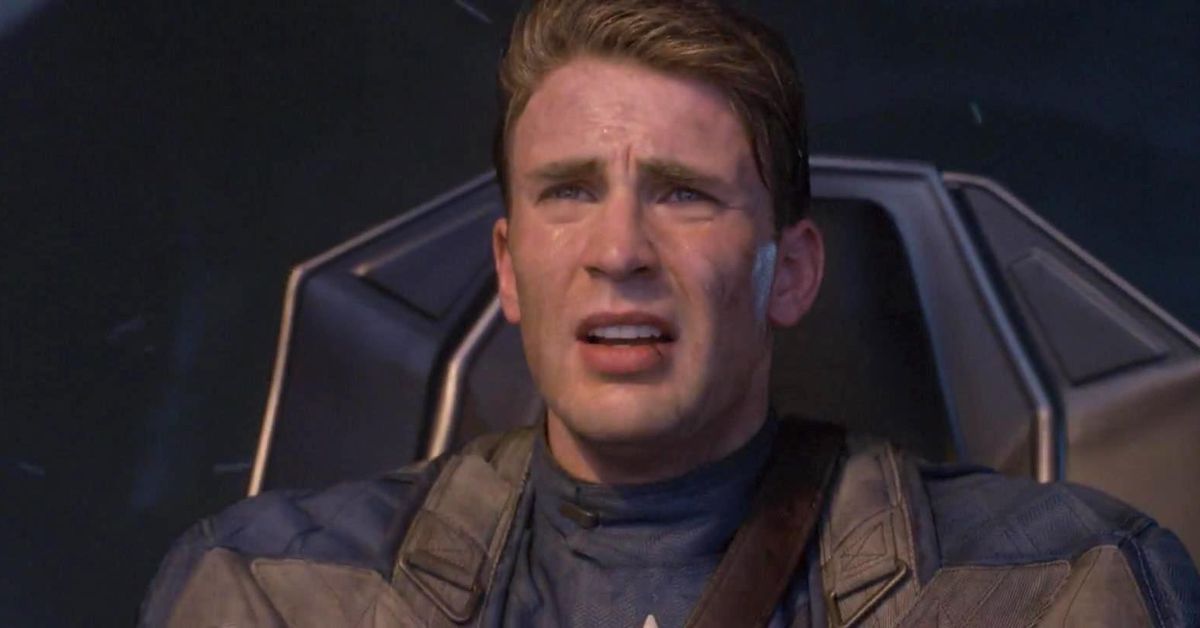 Captain America's first foray into the Marvel Cinematic Universe was both a critical and commercial success, thanks to an above standard fare storyline, fun action scenes, drama with a modicum of romance. The classic adventure tropes encompass this type of adventure movie. 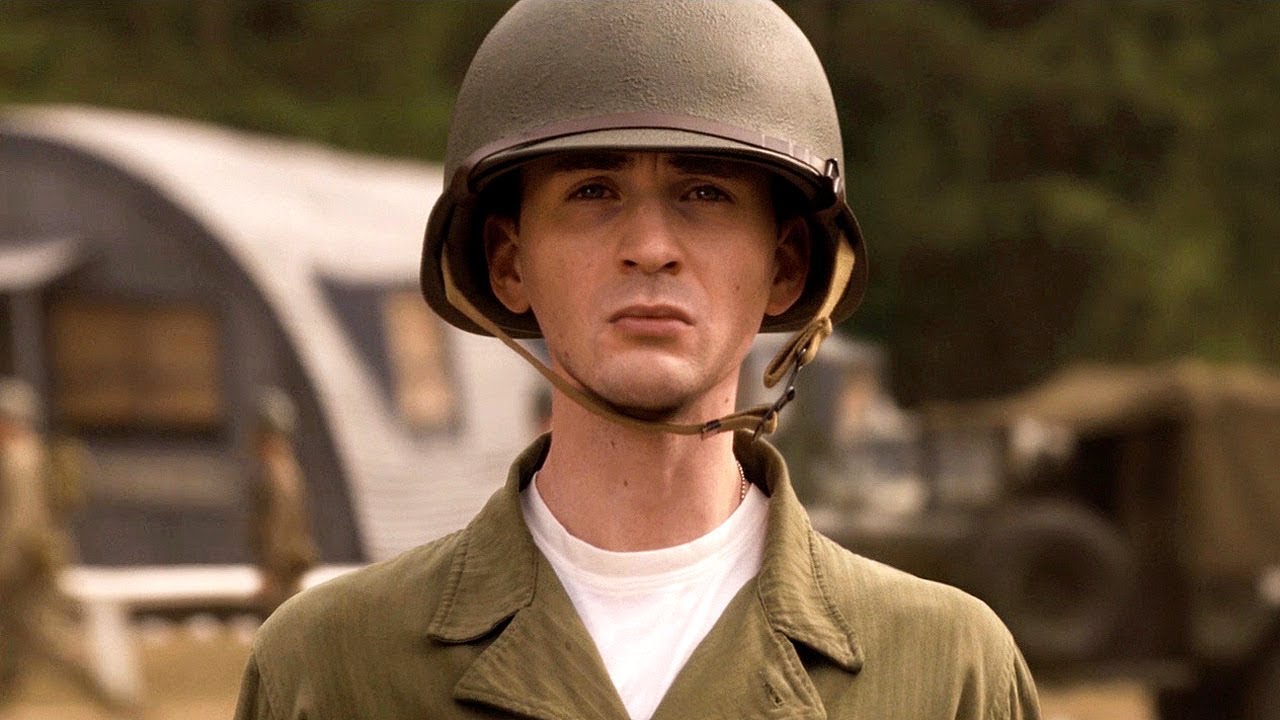 The special effects especially, CGI-ing Chris Evans face on a slender body double actor were impressive, Composer Alan Silvestri’s soundtrack in some ways, sounds as if it came from the first two Predator movies, but there is more than enough scores that differentiate itself as its own. 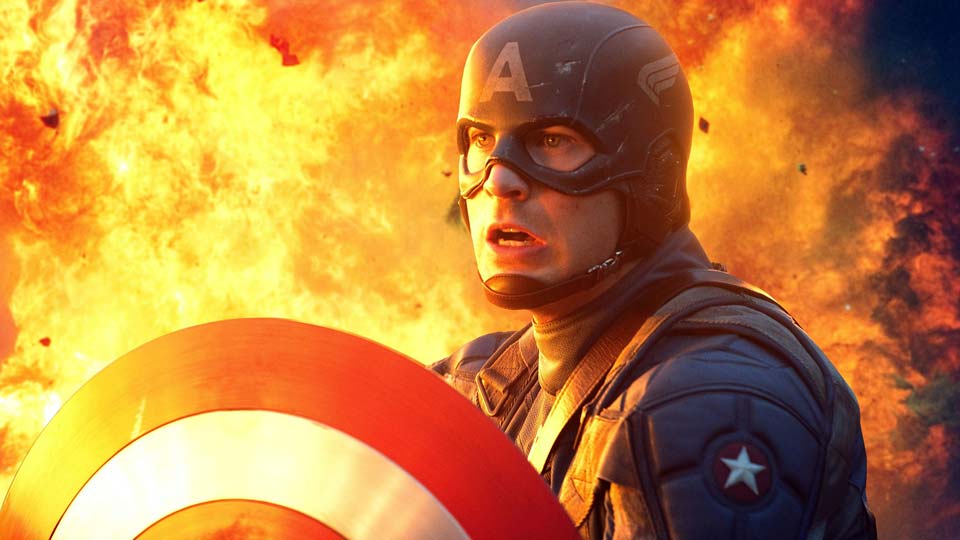 Johnson utilized stunning cinematography whether its Cap leaping from a huge explosion, or his first encounter with the Red Skull, as the camera zooms outward. Chris Evans straight outta the Fantastic Four movies, is a great choice as the "Kid from Brooklyn" he is courageous, naïve at times, yet willing to give his life for the greater good. Hayley Atwell as Peggy Carter is feisty and fierce with an earnest affection for Rogers. I always found her as one of the stronger female characters from the MCU, sadly, she was not fully utilized within the latter Cap films and worse, her titular series only lasted for one season. Two actors who also stood out was Tommy Lee Jones as the gruff sarcastic talking, Col.Chester Phillips who was skeptical of Steve's potential as America's Super Soldier.

And what good is a Superhero film with its Supervillian? Hugo Weaving mostly known from The Matrix films delivers, an exceptional portrayal of Captain America's arch enemy, who is cunning if not extremely ruthless. However, he does not necessarily subscribe to the Fuhrer's ideology or hunting for "trinkets" instead, Schmidt is more focused on long-term goals, weapons of mass He channels the character's vile and uncompromising methods while having this sense of unfettered arrogance about him. One of my favorite scenes is when abandoning Arnim Zola, via rocket copter, he hands the Scientist the keys to his automobile and then says, "Not a scratch Doctor, not a scratch." Captain America The First Avenger sets the template for having three amazing films based on a Comicbook character. You can't say the same thing about the Iron Man trilogy or even Batman and Superman.

And for a movie tie in game, Captain America Super Soldier for the Xbox 360 was a good title!
So, after ten years, its still an excellent Comic film which after the disaster that was 1990's Captain America was a long time coming and rightfully praised.
10th Aniversary Captain America Chris Evans Jack Kirby Marvel Marvel Cinematic Universe Retrospective Review