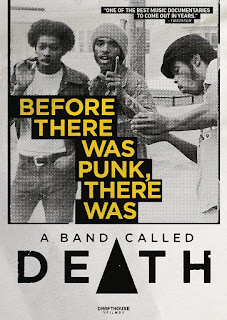 "They were Punk, before Punk was Punk"
-The New York Times
Aside of Juneteenth, a now certified Holiday celebrating Black freedom from Slavery, June is also known for Black Music Month. And in honor of the many contributions in music or pop culture, from Black American artists, here is my review of this emotional driven Rockumentary featuring, the unsung heroes of my favorite rock genre-Punk. A Band called Death! Detroit is often known for quite a few pioneering trends. The automobile industry, Comic Artists/Writers like Jim Starlin and Rich Buckler and the Motown sound that ushered in an incredible wave of talented Black recording artists. This retrospective begins with a celebrity filled foreword from the likes of Alice Cooper, Quest Love, Henry Rollins, Elijah Wood and um, Kid Rock giving testament of the band's legacy-the progenitors of Punk! 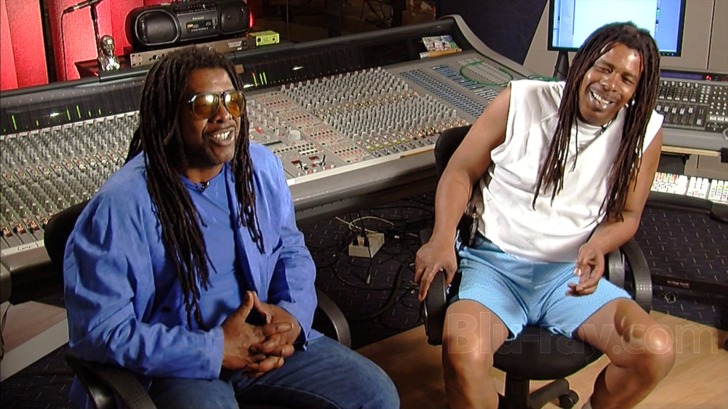 Y'see, way back during the early Seventies, three brothers from the Hackney family, Dannis, Bobby from Detroit lead by Dave who was inspired by the Who, Iggy and The Stooges, Black Sabbath, Jimi Hendrix Alice Cooper and Queen to play hard rock music and form their very own band, to which the neighbors would refer to it as "White boy music" when Soul and R&B was the norm. The band recalls their experience starting from a garage band to an ambitious rock trio in Motor City, and how the lead singer came up with the name sometime after an untimely family accident.
Despite creating a style of music that has never been heard before in the ears of many, The Hackneys were often faced with doubt and rejection.
For instance, while shopping for a recording contract, the group was turned down by all the major labels within the UK and around the world. All seemed hopeless until there was this one mogul who had taken interest in the Proto-Punk band, and his name was Clive Davis, yes that Clive Davis!
But with one caveat, to change the name "Death" as it may seem too nihilist or cryptic at the time.
Now this is where shit really turns into a hard knock lesson in business, Dave the leader of the band, refused to sign the band as it interfere with his "vision" . The other brothers would have made some compromise to get their music pushed out into the masses, but at the end of the day, they begrudgingly supported David out of family loyalty.
Determination and perseverance gave them the DIY methodology to print their own 45 record singles based on their master recordings when labels will not, and its the inner faith between the Brothers that kept Death alive, as much as possible. The music was a fast, energetic with a modicum of groove.
The rejection  was either due to: whether it was the name "Death" itself or the idea of black men playing hard rock music. 😬 But overall, it was the name that was felt with skepticism and consumer unfriendly.And in a "damned if you did, damned if you don't " or "too little, too late" the name and the music style was changed to The 4th Movement, a gospel/rock band that would align with a more spiritual sound. Unfortunately, it did not gain any traction, despite critics enjoying the songs, no one was feeling the religious aspect. So in retrospect, Dave was right all along when fighting to perserve the band's original name and concept,"Death" .
Dannis and Bobby in the meantime, forged a new group incorporating Reggae music called,
Lambsbread resulting in minimal reception.Halfway through the documentary, tragedy unfolds within the Hackney family and from the aftermath, the surviving members go on with their lives albeit, not as successful when you see that one of the bandmates works as part of a Night shift maintenance crew.
But through fate,After 35 Years, the band  was rediscovered by record collection enthusiasts who discovered a long obscured 45 which in turn, kickstarted this resurgence, giving credit where credit is due and redefining the origins of Punk Rock. The band's signature sound predates iconic Punk bands like The Damned, Sex Pistols, Bad Brains and even The Ramones! Long before bands like The Clash sung about political or social injustices, there was Death, with their most popular song, "Politicians in my Eyes."
In fact, when you compare The Damned's first album to Death, the influences are not coincidental. Going back to when The Hackneys were shopping for a label and rejected by UK recording companies, i'll bet my house that the British Punk band adopted...rather appropriated the sound of Death. Mickey Leigh, the brother of Joey Ramone also subscribed to the theory that Death's sound was the predecessor of what Punk became. A band called Death is an amazing journey that is an informative music history lesson while encompassing the trials, tribulations, rediscovery, business decisions and vindication. It' also serves as a posthumous love letter to faith within the man who had a vision, David Hackney. (RIP)
A Band called Death is now playing on Tubi TV