So, after the success from the recently release of Zac Snyder's Justice League on HBO, we are now treated, and I use that word sparingly, to another long-awaited project from one of the most polarizing Directors of our time!In the spiritual successor to Snyder's breakout Dawn of the Dead remake, Army of the Dead is an amalgamation of a heist film but with Survival Horror as in Zombies!
Dave Bautista of Guardians of the Galaxy fame stars as former mercenary Scott Ward, who has an estranged relationship with his daughter. While working as a fry cook, barely getting by, he receives a proposition from a wealthy Casino owner Tanaka, who informs him of a vault within a  building full of cold hard cash, but there is one caveat, its surrounded by hordes of the living dead.
And that's the summary of the film's plot device, folks! Goodnight! 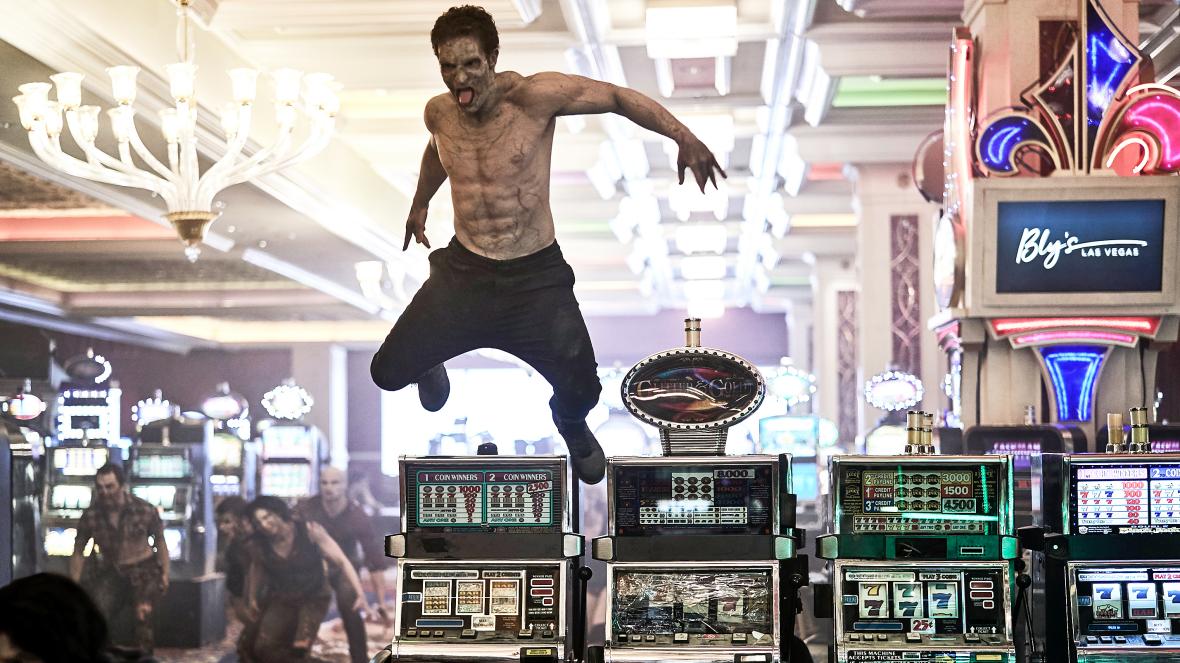 Anyways, Army starts off with a fun prologue where this couple in Las Vegas collides into a military convoy containing dangerous cargo, an experimental bioweapon (Sound familiar?) the contaminated content is loose and in doing so, causes a huge Zombie outbreak in the City of Sin and Elvis impersonators. And to think how all of this started from some idiot getting a blow job! 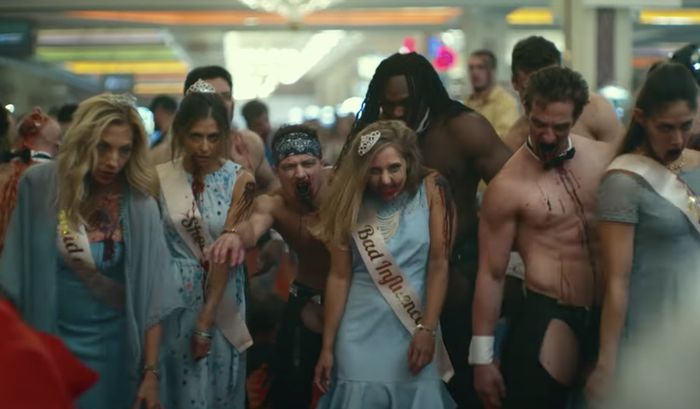 Now cue to one of the longest movie intros ever featuring Zombified Showgirls munching on Casino patrons and of course, Zac could not miss an opportunity to showcase a Zombie Elvis. These events are followed by an action montage that looks as if it were ripped straight outta those Call of Duty commercials, y'know, the ones where celebrities are mowing down opponents in over dramatic fashion? 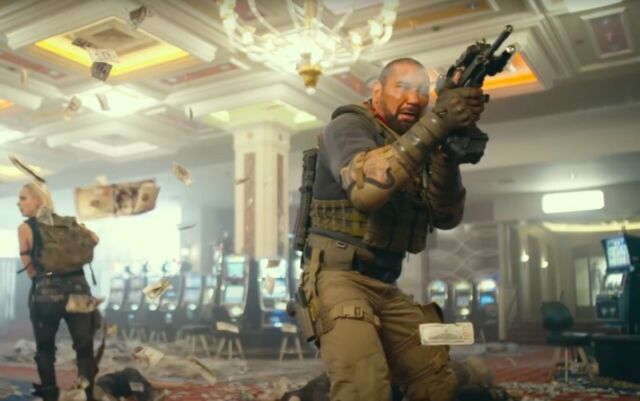 As for the rest of the 2hr and 30-minute movie itself, well to be honest, it’s not one of Snyder's best works and it shows when Army, is creatively bankrupt in spite of its mashup premise, which is the only thing that feels refreshing in a paint-by-the-numbers horror film full of cliches.

For example, there's Scott's traumatic nightmares of an incident which occurred sometime ago, that serves as part of his motivation for going into a contained Las Vegas full of Zombies. Afterwards, he recruits these "no nonsense" specialists over the course of maybe 20 minutes of
dull pacing compared to Dawn of the Dead, when too much screen time is wasted preparing to enter the "Land of the Dead "before Las Vegas becomes a scorched wasteland .
If you've seen as much movies as I have and I’m sure you did, you'll be able to spot tropes and ideas from various films whether its Escape from New York, Junk, Train to Busan, Return of the Living Dead, An American Werewolf in London, Resident Evil Extinction, I am Legend, and especially Aliens. But unlike Aliens, the writing or lack thereof, pales in comparison to James Cameron's 1986 ensemble cast classic. Zac should have rehired James Gunn (Again, Dawn of the Dead) as a co writer. I would have loved to have a Snyder/Gunn reunion, but it seems that Mr. Gunn has his hands full with the upcoming Suicide Squad and GOTG 3. 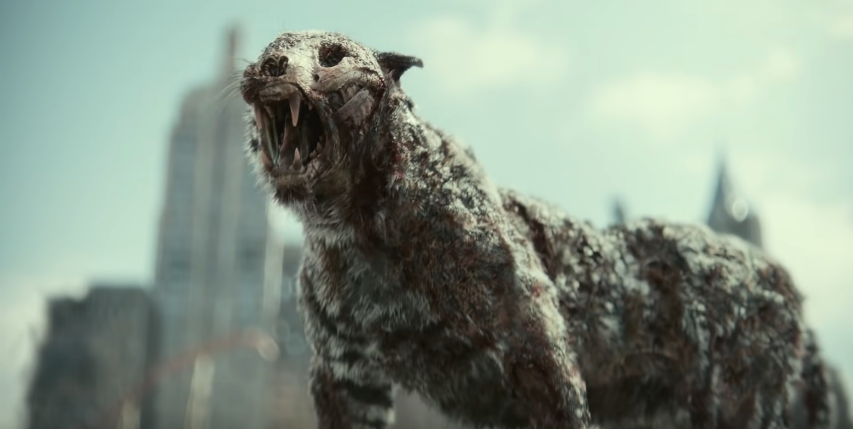 Zac's scripting for "Army" is more spit balling than having subplot contrivances that would complement the film's narrative. One minute you see a supporting character making an escape attempt, the second she is written off unceremoniously. Snyder even does self-referential scenes like the infamous baby Zombie. The dialogue is too on the nose at times, but I have seen worse from Resident Evil and by that, I’m not talking about the original Playstation "Jill Sandwich " game, but Pail “Without Substance” Anderson’s films!If you ask me, Zac seems more occupied with his DP work than tweaking his script which is unfortunate as this movie could have been another successful comeback. 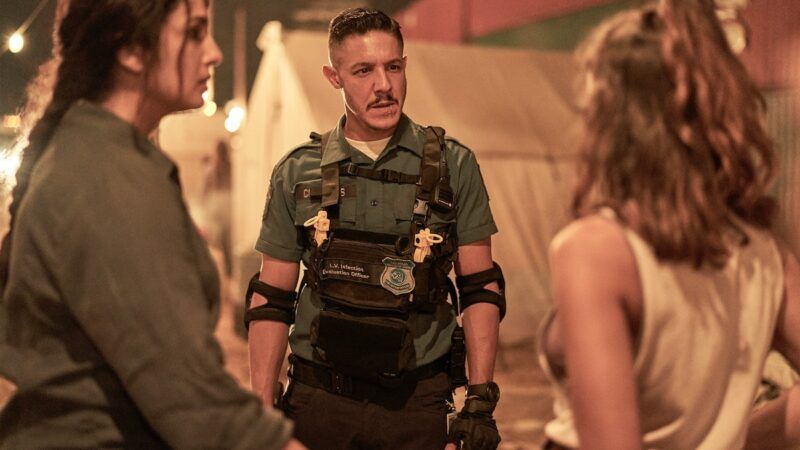 As if Snyder is not shoehorning one too many needledrops, he's also implementing social commentary via hot button issues like immigration, internment/detention camps, political correctness and even #MeToo where you have this Border guard played by Theo Rossi (Sons of Anarchy) becomes too “friendly” with the detainees. A few song cues were appropriate i.e. the opening of the vault (Accompanied by the theme from Excalibur) to The Cranberries "Zombie", of course you couldn't make a Las Vegas themed movie without throwing in some Elvis song. 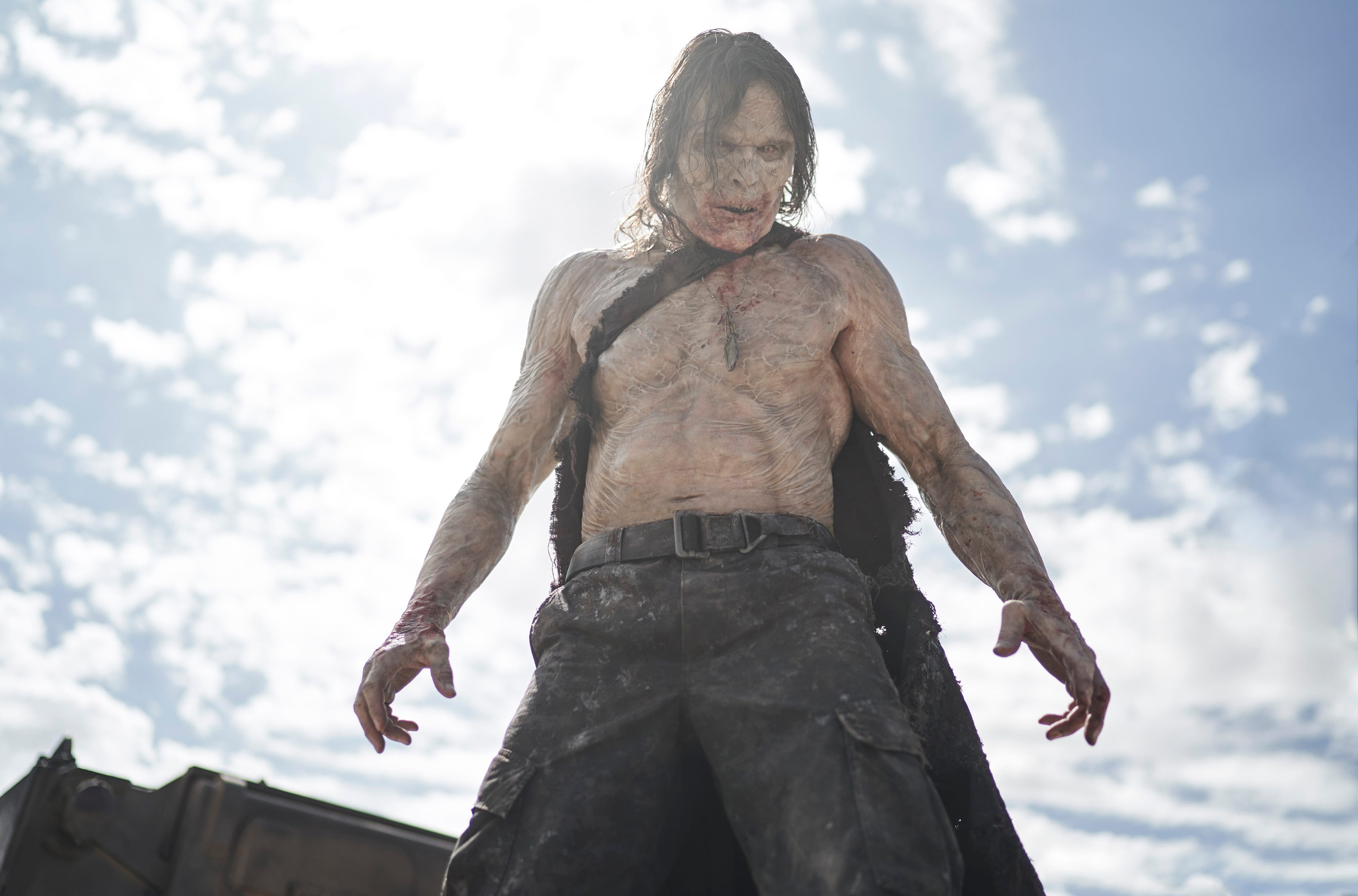 Now let's get to the "meat and bones" of this Zombie flick, the Zombies themselves primarily the King Alpha Zombie, Zeus who not only has super strength, endurance, and stamina but wears a fucking mask and cape! As for some of the other Zombies, instead of walking slowly in droves, they are either fist fighting against our Mercenary heroes, or dodging bullets like Spider-Man! Unlike his DOTD remake where you feel some sense of hopelessness due to dire situations, here in AOTD, I often found myself laughing at the absurdities throughout this story and subplots. 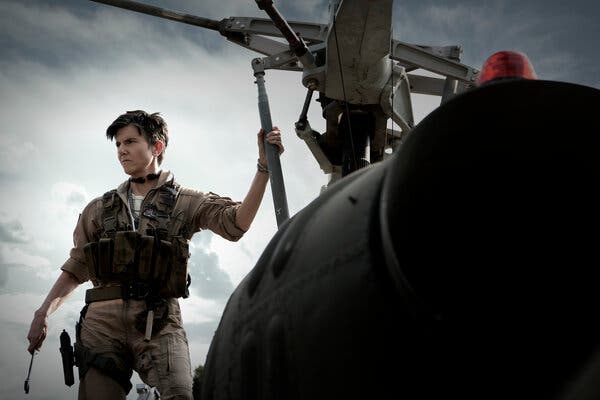 Former Wrestler Bautista deserves better than this as he has proven to be a solid actor. Just watch his brief appearance in the excellent Blade Runner 2040.The rest of the cast features Omari Hardwick (The infamous antihero "Ghost" from Starz's POWER) Garret Dillahunt of Fear the Walking Dead who is a cross between Alien’s Carter Burke with some Albert Wesker thrown in during the 3rd act. And most notable, a CGI Tig Notaro who filled in for another actor who was ousted due to allegations of sexual misconduct. She was one of the few saving graces but unfortunately, it’s not enough to redeem this slog that's story pacing is as slow as a shuffling corpse. You can have more fun playing Resident Evil Mercenaries than Army of the Dead.
Aliens Army of the Dead Netflix Resident Evil Review Zac Snyder Zombies!!