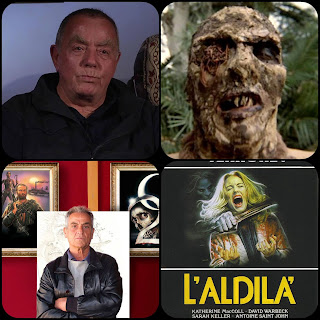 Now this is an unfortunate coincidence, almost to the extent of something supernatural when you factor in the passing of two astonishing contributors of Italian Horror.
Giannetto De Rossi 1942-2021
Makeup Effects Artist
Let us begin with the man partly responsible for giving me all those nightmares since I was first exposed to Lucio Fulci's 1980 Italian Shocker, Zombie! De Rossi's application to the Zombies' aesthetics was a huge contrast to the blue faced ghouls portrayed in George A. Romero's Dawn of the Dead. Complementing Fulci's direction and Fabio Frizzi's eerie synth soundtrack was De Rossi's decaying Zombies with some sporting blood accents or mummified features. Some may have referred to them as "Walking clay pots" but his influence has spanned well over many Zombie oriented films, television shows and even videogames like Resident Evil.
This wasn't the last time De Rossi had collaborated with Fulci, a few years afterwards they reunited for two films based from Fulci's Gates of Hell Trilogy, The Beyond and The House by the Cemetery with the former being Fulci's best work since Zombie!

It was De Rossi who applied these white contact lenses for median Emily and others fell under the curse from The Book of Eibon. De Rossi other notable works included Conan the Destroyer, Dune, Rambo III, Kull the Conqueror and Alexandra Aja’s High Tension. But these were no match for decomposing Zombies or Zombies versus a Shark! De Rossi passed away at the age of 79.
Godspeed to the mastermind behind the macabre Makeup!
Also, who passed away very recently was Movie Poster Artist Enzo Sciotti.

Sciotti's artwork should be awfully familiar to the Horror community due to his amazing art posters for iconic Italian horror legends Lucio Fulci, (The House by the Cemetery, The Beyond, Manhattan Baby, A Cat in the Brain and the disappointing Phenomena.)

As well as Dario Argento and Lamberto Bava films most notably, Two Evil Eyes, and Demons.
Sciotti's career gained further traction when creating posters for American films such as Cujo, Near Dark, Critters, Maximum Overdrive, Blue Velvet and Sam Raimi's Army of Darkness.
Sciotti's brilliant posters was partly responsible for promotion of horror and suspense films thanks to his phantasmagoria visuals and fluidity within his paintings. Fans of his may want to pay respects on his Instagram page which is a treasure trove of great paintings and sketches, including erotica artwork.
Enzio Sciotti was 77. May they both rest in peace.
The irony is how both passed away 25 years after Lucio Fulci's death in 1996.
Dario Argento Horror In Memoriam Italian Horror Lucio Fulci Movie Posters Zombie