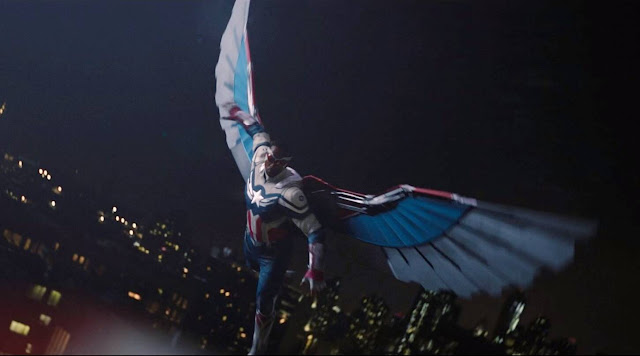 "Every time I pick this thing up, I know there are millions of people who are going to hate me for it," "The only power I have is the belief that we can do better."

Okay, we have finally reached the series finale (?) of Falcon and the Winter Soldier. Although I have a few misgivings about episode 6 appropriately titled; "One World, One People" it was a satisfactory experience as far as everything coming 360 as far as the storyline and arcs are concerned. Let's get to it!

This episode begins after the cliffhanger from last week with the GRC being under siege by Karli and her Flag Smashers. There's a familiar silhouette of a winged man "flying high in the sky, sailing through the air he's America's fighter.." 😉
And as predicted, Sam makes his dramatic entrance as the new Captain America! Um, "yay fan service!"Meanwhile, Bucky is at the scene aiding Sam and I was glad to see how the SWAT team acknowledged him as "Sergeant Barnes" as he should be despite being brainwashed by Hydra as the Winter Soldier.
Sam mixes it up with Batroc ze leaper but not before exchanging a few taunts like Batroc threatening to remove Falcon...er, I meant Captain America's costume for auction. (Hey, times are hard after the Blip!) With "Uncle Sam" clapping back with Batroc having enough money to buy French Fries and a Baguette.  Batroc did not take that insult too lightly as he nearly kicked Sam's ass. But thanks to his wit and tactics, Sam prevails in time to rescue hostages about an evacuating helicopter.  This scene was a bit lengthy however, it’s good to be reminded of Sam's aerobatic combat maneuvers and plus Redwing is back!With her plans going awry, Karli with the aid of a few double agents, lock the other GRC hostages in an armored personnel vehicle. In steps John Walker who has a score to settle with Karli. 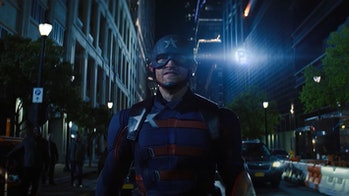 This is one of my favorite scenes where John holds his own against a group of Super Soldiers when trying not to lose his shit like he did in Germany.  I noticed how more powerful Karli has gotten when grabbing or moving heavy objects like a pole or a cinderblock barrier. What the fuck?!? Bucky comes to the rescue and nearly falls to his death had it not been for the Vibranium bionic arm.
John faces a tough decision, either avenge Lemar's murder who Karli said; "his life didn't matter" (Ouch!) or redeem himself by rescuing the hostages from a dangling transport?
In the meantime, here comes the Power Broker! And as predicted, Sharon Carter who reveals that it was her who fostered Karli and expressed disappointment in her. What makes it funnier is how Batroc was hubris enough to blackmail Carter and that was a big no-no!During what appears to be a Mexican stand-off, between the unholy trio, Carter kills Batroc but catches a bullet from the dearly departed Mercenary.
When Sam finally confronts Karli, she goes all in with trying to kill him, Sam having a "Luke Skywalker" moment from Return of the Jedi, refuses to fight her, as he feels this empathy for a ruthless Terrorist who like Batroc is giving him a hard time. A victorious Karli points her gun at our titular hero, despite a moment of hesitation, she was about to clip Falcon's wings until Sharon provides a little "intervention".So, that makes two major villains dead, I guess. Karli feels some remorse toward Sam as she lays dying in his arms. Typical trope but it worked.

Sam hovers downward like an angel with a deceased Karli in his arms, while he's greeted with praise and applause from the bystanders, everyone is confused by his new "supersuit" is he the new Captain America Or "Black Falcon"? The latter is a callback to nearly ever Black Superhero being labeled "Black" as a surname. This is Sam's defining moment where he makes a monumental speech, damning America's hypocrisy while explaining why the Flag Smashers came to light followed by some cautionary meta.Sam wins the crowd over while; John is begrudgingly disappointed.
Ya gotta love Bucky’s comedic timing with; "Sorry, I was, uh, I was texting and so, all I heard was, um, 'a Black guy in stars and stripes'."

Overall, it was a cathartic finale or more like season finale since there are quite a few loose ends. Walker gets a new uniform and title; Bucky confesses to his friend that he killed his son and finds more closure after sending his Therapist the “book of lists”. There was that great scene between Sam and Isaiah with the latter coming to terms with a "Black Captain America " and how Sam pays it forward with a statue of the (rightfully so) disgruntled Veteran at the same exhibit where Steve Rogers is being honored. A tearjerker for sure. Zemo makes a brief "blink and you'll miss it" appearance at the Raft.
The following scene was a huge Block party celebration again insert Return of the Jedi reference, where Sam and James are having a bruh moment when staring into the Louisiana lake during a sunset, either reminiscent about their friend who's "on the Moon" or waiting for his Force ghost apparition to appear!
Hyuk,hyuk,hyuk.
Annnd, Cut to credits!
But wait..!!!
Sharon receives a pardon and is reinstated. She makes a call to whomever, boasting at how they will have access to ordinance, intelligence and all the perks that go with a top government agent.
So, I guess next year, its "Same Cap time, same Cap channel ".
Underneath its social political underpinnings, Falcon and the Winter Soldier is another solid entry for Disney Plus’ subscription service. Unlike Wandervision, the series gains traction during the first episode leaving you waiting impatiently week after week to see what unfolds. Its nuanced storytelling is one of the top reasons, why this series is so good. The comedic banter between our primary protagonists is entertaining and there is plenty of character development whether its Bucky, Sam, Zemo, Walker or Karli Morgenthau. Those of you pent up, butthurt incels out there, who deem it as too “Woke” need to see a therapist or get out from your basements. Ah, maybe both! Nearly two years since subscribing to Disney Plus, with Falcon and the Winter Soldier being one of the sole reasons, it seems as if my investment had finally paid off! 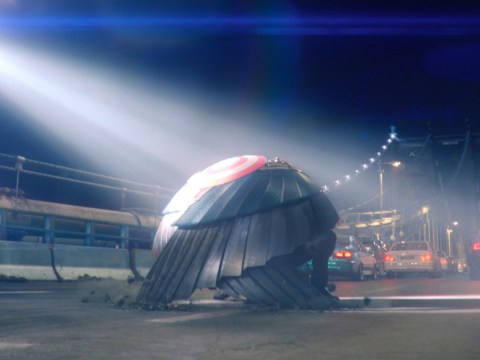