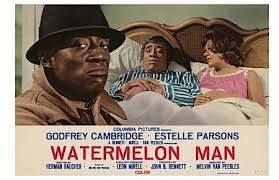 Systemic racism has been all the rage this year..oh, who the fuck am I kidding? It's been around for the longest! Yeah, the rise of Trump and his rhetoric brought out all the in-your-face mouth frothing monkeys, to the point that we're practically back in the 50's, but it's not some new trend.
What I love about vintage Cinema, is how at times, it can be both topical  with subtlety when it comes to socio political commentary without being labeled as “woke”! So let's take a trip back in time, as in 50 years ago, when the Civil Rights era had reached its apex and while some divisions healed within the racial gap, there was still an abundance of hatred towards blacks. 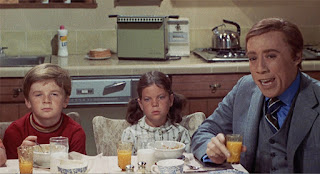 In this 1970 satirical classic, Godfrey Cambridge plays Jeff Gerber, a successful salesman,  and a health nut who is  happily married with children. Oh, did I forget to mention that he's also a bigot?So one evening, Jeff gets a rude awakening,  when he finds out that his straight hair is now "kinky" and his skin pigmentation has changed from vanilla bean to chocolate! 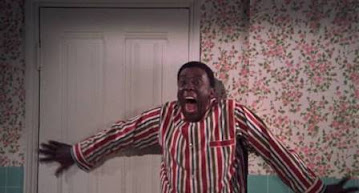 Throughout the movie, Jeff's life takes a turn for the worst when he's threatened to move, his marriage is in trouble and as if that wasn't bad enough, Jeff is harassed by the police and everyone else who isn't Black! Watermelon Man at first, may sound like someone-off Twilight Zone episode due to its uncanny premise, but it's much more than that. You go through Jeff's awkward odyssey  as he gets the backend treatment-dealing with the ongoing situations that many if not most Black Men experience in America.

The late Godfrey Cambridge plays into the role reversal archetype of your ignorant and dare I say, arrogant white racist male. The cumuppings his character receives are hysterical, when he's so desperate to revert his condition that he bathes in milk! But later on, one may feel some empathy for him toward the end. The indoor scenes between Cambridge and Estelle Parsons who plays his wife Athena, gives an off stage Broadway play or like an episode of The Honeymooners.
Athena is supportive, but how long can she endure the strain and burden of their "interracial marriage " without losing her shit? This Melvin Van Peebles underrated classic focuses on your usual preconceived notions and stereotypes of Black people from both Gerber and the people he encounters. 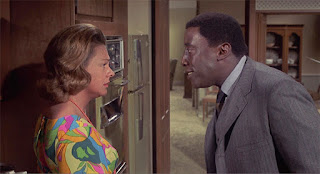 Van Peebles spared no expense when making fun of White people's reactions when running into a person of color and even the so called Liberals, expose their true colors when it comes to persons of color i.e. Blacks be it Athena or Jeff's Swedish Coworker Erica, who has this insatiable desire for dark meat. 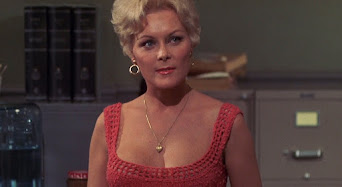 Toward the third act Jeff finally comes to terms with his ordeal and embraces that moment of clarity, which has him come to terms with his newfound identity crisis. The film is funny at times and serious. Think of it like bittersweet chocolate. Metaphorically speaking, or is it from my love for sweets?
Watermelon Man became an instant success for both Columbia Pictures and Van Peebles, who turned down a three part deal with Columbia to make the Movie he wanted, Sweet Sweetback's Baadasssss Song!After 50 years, this movie is still relevant as it is humorous when providing an open dialogue regarding racial bias, coping and acceptance. The irony of ironies, is how some caucasians like Rachel Dolezal would claim to be black, when she isn't. I guess her ulterior motive was to become President of the NAACP or some other opportunistic ambition. Kinda like 1986's Soul Man. Now that there;s a term for identifying one's gender, will there be a new venacular for skin color or race, like "Cis Black"?😆 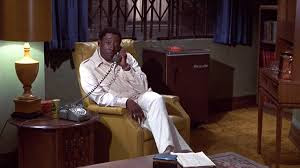