These were my Favorite Things: G.I.Joe 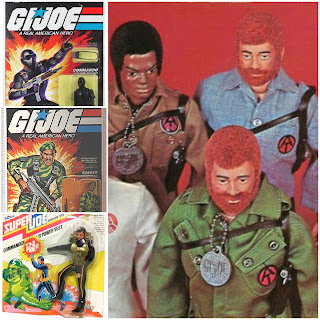 It's Christmas time and it's also time to unwrap another segment of the toys that made me!
Here again, are one of my favorite things!
What was inspired of all things, Barbie, became the very first action figure aimed towards the  younger male demographic. Not only did G I.Joe went on to influence the toy market, it also became a franchise of its own!
To tell the story and humble origins of this awesome toyline, would be a "TLDR" kind of thing. So, for those curious there's that Toys that Made Us documentary available on Netflix.
Now, as for my own experience,  I was a kid who received the latter line of the 12' figures, dubbed the Adventure Team during Christmas 1976. 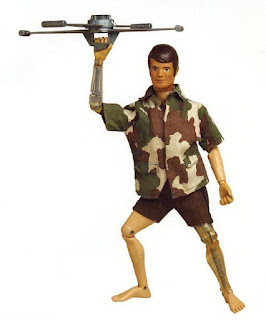 The ones in particular  were Atomic Man who clearly was a ripoff of the Six Million Dollar Man figure. The only difference was, the Atomic Man had a much cooler aesthetic.  His leg and arm had a clear plastic see-through design with machine like parts inserted, and his arm came with a helicopter rotor that spins when you turn the built in cog. Hasbro has always been innovative when it came to their toylines.  Atomic Man aka "Mike Power" had a left eye capable of flashing when you tap the back of his head, as if he had a bionic or rather, atomic eye. 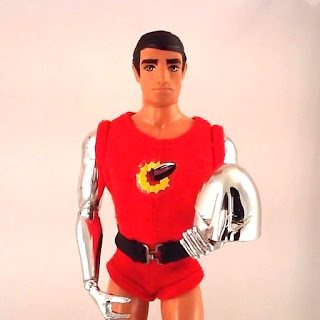 Bulletman looks like a 3rd rate Superhero  but had these cool chrome like arms where you can see your own reflection. What's funny is when you remove the helmet, the figure resembles Sean Connery!! "Bullet, James Bullet". Um, ahem. Then there's the third Joe and this time its a Black figure, because "diversity " and spoiler Alert,  I'm black! 😜 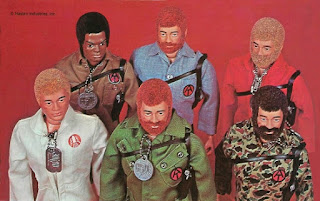 What I admired the most about these toys aside from articulation as in fully posable, were the cool yet bizarre concepts and designs from the iconic toyline.  For instance, during Christmas of 1977, my Mother showered the tree with these new action figures called Super Joe Adventure Team.  Super Joe was a semi spin-off of the original G.I. Joe line, which folded due to some oil embargo and as a cost cutting measure, Hasbro had shrunk the figures from '12 to '8. I sense an inside joke but I won't go there since this is a Holiday oriented thread.😅
Anyway, the premise of Super Joe was leaned towards a Science Fiction/Superhero narrative, especially when Sci Fi fantasy was all the rage after Star Wars and the Micronauts toys.
The ones that stood out for me, were Super Joe Commander,  who was equipped with gold plated battery operated vest, Luminos, a see-through figure that looks like a giant sized Micronaut, The Shield whose arm was attached to a shield that lights up and Darkon, made from the same mold as the Commander, but with  green and black color swaps! 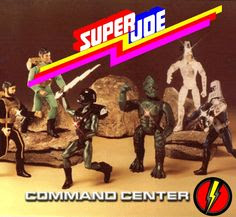 While some of the gimmicks like the "One-two punch" and "light sensors", the figures were made with shoddy craftsmanship. The fabric from the uniforms would tear easily and as time passes, the rubber joints deteriorate.In spite of all this, the Rocket Command Center vehicle was cool since it looked as if it came from Gerry Anderson's UFO and Captain Scarlett series, respectively.

Super Joe lasted only a year, as far as I can remember. And Kirk Bozigian of Hasbro, absolutely hated the toyline, yet mentioned how Terron, the walking monster that had built in light sensors, was the best thing out of the entire catalog. That said, I appreciated the toys for what they were, and not to mention that the music from the commercials  and the splash art packaging was cool!
Speaking of commercials, it was on a very snowy day in April of 1982, when I was watching what seemed to be a new cartoon show, but in actuality, an animated commercial for Comic Book! I remember the seeing military officers watching a woman being kidnapped, with one yelling  "she's been kidnapped by Cobra!" Followed by; "We have no alternative,  call in G.I.Joe!" *Cues the the theme song* the commercial detailed this special military force preparing for this rescue operation, the comes thus blond stoic guy riding in on a motorcycle with the narrator saying; " Who's leader of the Joe team?" Hawk! 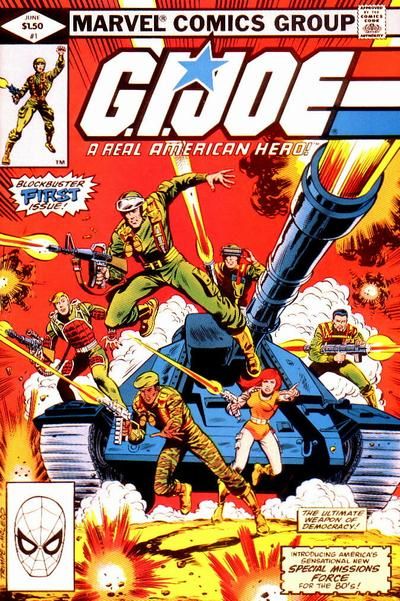 With Hawk leading the charge along with a red haired female in some unitard and a guy dressed in all black, I became even more interested, then there's some guy flying after a sports car with some jet pack attached with a closing narration:"The legend of G.I.Joe! New from Marvel Comics!"
Being a fan of Anime as a kid, I immediately recognized that the animation was from a Japanese studio. Marvel Productions (Spider-Man and his Amazing Friends) along with Sunbow (Star Blazers) contracted Toei Animation for this exciting commercial! 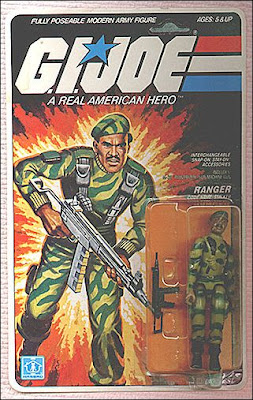 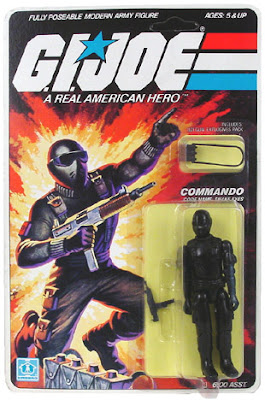 I was set on getting at least two of the figures around Easter, my first were Stalker because not only was he Black, but came with this green beret and cool submachine gun!
Then Snake Eyes the black clad commando with an Uzi and some purse? No actuality,  it was an explosive pack.😆Hence my name, "Stalkeye !" "Now, you know!"
G.I.Joe A Real American Hero was the most successful line out of the entire Hasbro library of toys! Thanks to savvy marketing like animated Comic and toy tie in commercials , a Marvel comic that gives the figures a backstory, fully posable figures, vehicles, amazing villains and one of the very first Animated series based on a Toyline! 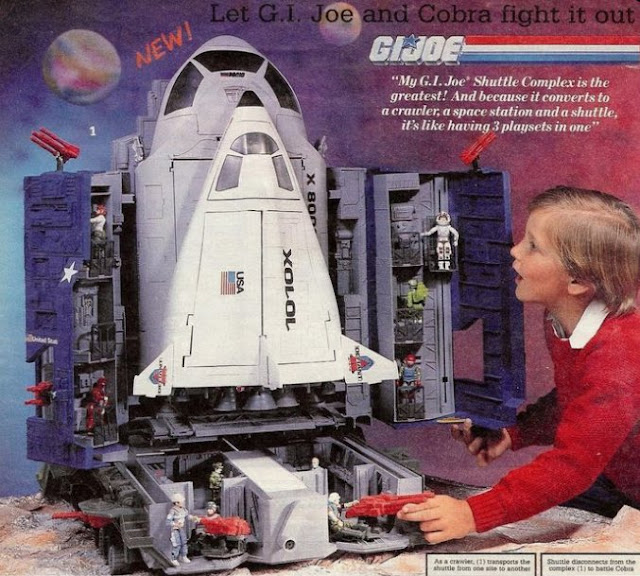 I was hooked instantly and grandfather,  bless his soul, made sure I received a shit load of Joe figures, vehicles and playsets every Christmas!
I was pretty much set during the holidays and one of the most memorable Christmases, was during 1987 where under the tree was a big ass box from my aunt. Inside was the Space Shuttle Defiant and as if that wasn't enough, there was a whole assortment of vehicles and figures from this new unit called:Battleforce 2000 A secret force for G.I.Joe with vehicles that can transform and merge into a makeshift armed fortress. It was as if Hasbro was flipping the bird to Kenner's MASK!  Battleforce was great concept but Joe purists and collectors thought of it as too gimmicky and far-fetched.  Needless to say,  it didn't last over a year.
Then came August 1994, where at the 30th Anniversary of G.I.Joe convention,  my penpal and VP of Hasbro at the time, Kirk Bozigian,  made a startling announcement. The Real American Heroes were "retired!"
At the auditorium there was a collective of sighs and disappointment. The end of an era.
Although the toyline was shelved for an inferior product (Sgt. Savage) I walked away with fond memories of my past holidays and so forth.
G.I. Joe overall, was the game changer of toys for boys! The Godfather of action figures, inspired the Mego collection, Star Wars, Micronauts and so many other plastic playthings throughout the decades! And if there were any toy, I was proud to own, it was G.I.Joe, one of my favorite things!
Merry Christmas 🎅 🎄 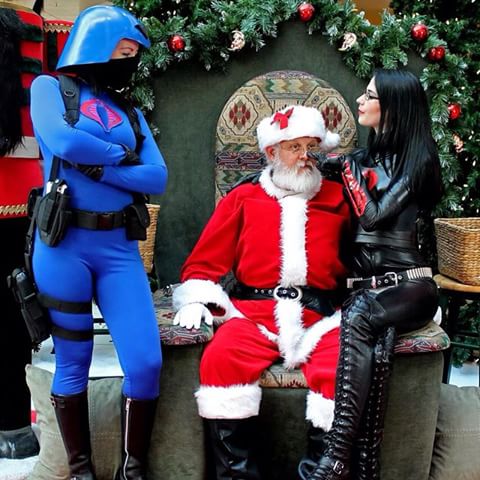