This week  marks the tragic 40th anniversary of Beatles' frontman, songwriter and activist, John Lennon who was murdered unceremoniously by a deranged man in New York City, December 8th 1980.
Lennon, despite his personal flaws, was a very gifted Songwriter. One of his more notable contributions toward the music industry,  was a song that he cowrote with his then partner and friend Paul Mccartney in 1967 called "A day in the life". The final song from the Sgt Peppers Lonely The song's verses contained melodic musings interrupted by a crescendo followed by a striking chord at the end. 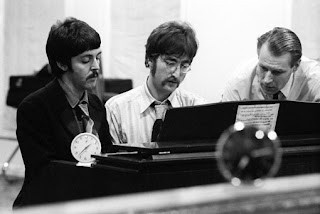 A Day in the Life went on to become one of the most influential songs of all time, to the extent that it served as an influence towards Audio studio THX's opening theme.
What most audiophiles and even cinephiles excluding present company, were not aware of, is how "A Day" influenced one of the most scariest scores and scenes of horror cinema.
In the Lucio Fulci 1979 Italian Shocker Zombie 2, released in the United States during the Summer of 1980 as "Zombie", one of the most horrific scenes from the movie, is where Dr. Menard's wife Paola (Played by the beautiful Olga Karlatos.) steps from out the shower, pops a few pills while preparing to dress, only to be interrupted by a low growl, out of fright Paola immediately  barricade herself from the approaching menace. Despite her efforts, all is in vain as the Zombie smashes through the door, grabs her by the hair and pulls her eye towards a chunk of splinter caused by his entry.
What made this iconic scene so memorable aside from the scary build up, was the music cue itself composed  by Italian  Musician Fabio Frizzi. In a 2016 interview from fact mag,Frizzi was asked about what kind of music influenced his choices for the "Splinter in the eye" score.
Fabio Frizzi: "One example I can give is the scene with the splinter and the eye, the inspiration for which came from the Beatles track ‘A Day in the Life’. The start of the second part of that song – “woke up, fell out of bed” – has a strong piano and bass, and then in the end there is an orchestral struggle with piano and bass in the background, “bom-bom-bom-bom”. If you’ve ever played or written music, you’ll know you start with an idea, fill it with other ideas and moment by moment it changes into something original, so I started from that and built on it. You see, there is a secret when you steal something!"
Frizzi's same score was later used for another scary scene in Zombie,  where Zombie poster boy himself "Worm eye", makes his grand entrance by slowly rising from the grave, while Susan played by Aruetta Gay, is left in a catatonic state prior to Wormy aiming for her throat. This time, the score is accompanied by shrieks adding to more tension build up.
After Zombie's success, Fabio collaborated with the Godfather of Gore once again to compose more soundtracks for Fulci's films, City of the Living Dead and most importantly, 1981's The Beyond, thanks to one of his most memorable horror themes, "Voci dai nulla" a powerful operatic song that is deserving of praise as much as Jack Nitzsche's The Exorcist. The theme is often used as the intro for our in house Horror host, The Phantasman!
So there you have it! Thank you John, and Fabio.
1980's Respecting The Classics Fabio Frizzi John Lennon Lucio Fulci OG Horror Paul McCartney Soundtracks The Beatles The Phantasman Zombie