They have such sights to show you: My favorite Scary Cartoon Episodes! 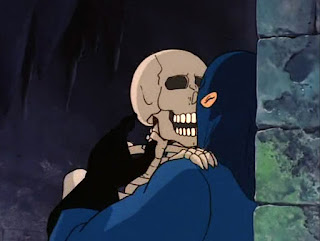 They have such sights to show you!
There’s q general misconception that cartoons, especially those being produced in america, are tailored exclusively for children. But on the contrary, it's further from the truth. Since the early days of Bugs Bunny and Disney, there was plenty of adult content that managed to find its way into american cartoons, be it subtle, or blatant. With the advent of saturday morning cartoons during the 60’s and 70’s the FCC implemented restrictions when it came to violence and of course major animation studios like Filmation and Hanna Barbera adhered to these policies and dialed down any violent content that would be considered violent or harmful to a child’s mental development. 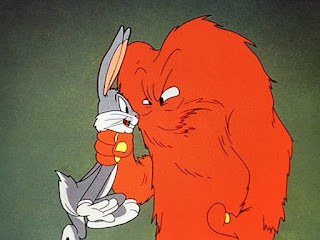 As a result, there were Ghouls and monsters, or what were supposed to be “monsters” chasing down a bunch of teenagers and their mascot doggie, with songs  being played in the background. But “Ruh-roh, Raggy”, somewhere within the pacific, Japan is laughing at America!

However, there was a gradual shift that began in the early eighties, thanks to syndicated and cable produced animation, there were no boundaries as studios had more free reign to unleash material that would be suitable for both children and young adults who are invested into Superhero animation.Despite these cartoons bearing similar tropes like your standard  good vs evil slugfests, there are a handful of episodes out there that have deviated from the norms by throwing in cryptic, violent or terrifying stories thanks to clever writing and creative imagination. Here are but a few examples of scary episodes from cartoons solely not based on Horror. 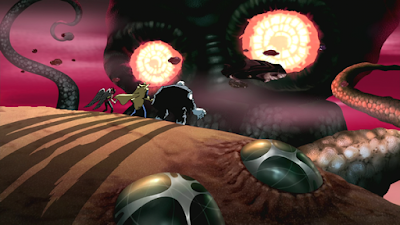 The Terror Beyond pts 1 & 2 (Justice League )
Written by the late great Dwayne McDuffie, this two parter for the mist part focuses on longtime nemesis  Solomon Grundy, a powerful brute who was resurrected from the dead after his body was dumped in the swamp that contained mystical properties.
After being hunted by the United States Army, and saved by Aquaman, Grundy is summoned by Dr.Fate to prevent the looming threat from the Cthulhu esque monster called the old one. The questionable motives by Aquaman and Dr. Fate brings attention to the League members Superman, Wonder Woman and Hawkgirl that leads to a clash.
The Terror Beyond pays a modicum of homage when it comes
to HP Lovecraft and especially Marvel's Defenders with Dr. Fate as Doctor Strange, Aquaman as Namor and Grundy filling in for the Hulk which is obvious with him speaking in third person like "Grundy crush"! (Hulk, snash!) This episode is another benchmark for the excellent DC series, thanks to McDuffie's philosophical undertones of faith, redemption and soul searching (literally!) As a footnote, there is a cathartic follow up titled Wake the Dead. 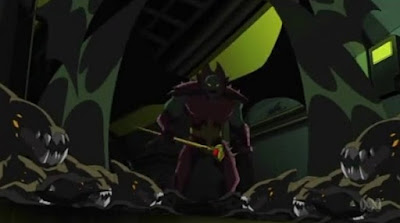 Assault on 42 (Avengers: Earth's Mightiest Heroes)
It's been 10 years since one of the best Superhero animated series made its debut, and in only two seasons Avengers Earth's Mightiest Heroes had pulled off a variety of great episodes prior to those assholes at Disney, pulling the plug.
In Assault on 42, Captain America,  Wasp and Ms Marvel escort Supercrinmal Whirlwind to Prison 42, a Supermax prison located in the Negative Zone that's inescapable like the Roach Motel, "once you check in, you don't check out"! And speaking of bugs, the prison complex is unexpectedly infiltrated by a horde of giant insect creatures. In order to survive the odds, Cap recruits the most dangerous inmates before a new swarm under the command of Annihlus launch another attack.
"42" distinguishes itself from the other EMH episodes. It's sheer terror elements and impending doom, during a standoff, is reminiscent of classic films such as Aliens and John Carpenter’s Assault on Precinct 13.
Its tense building moments are overshadowed by the violence and casualties that have occurred during the mid act. This was perhaps the most violent and terrifying  episode I have seen from this series. Despite a rushed ending,  Assault on 42, is one of my favorite animated Superhero episodes to date. A constant reminder of why this series was criminally short-lived. 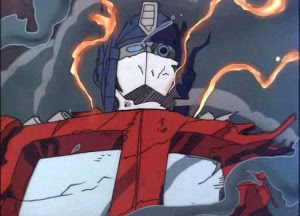 Dark Awakening  (The Transformers)
In this shocking episode that takes place after Transformers the Movie,  the Autobots along with Spike and Daniel are forced to land on a derelict vessel which is also a burial site for the fallen Autobots who perished during the war on Cybertron.  During an assault led by Galvatron, a mysterious figure appears from the dead to save the doomed Autobots,  Optimus Prime. But is there more than meets the eye, from his noble gestures?
If you were hurt from Transformers the Movie, leave it to Dark Awakening go rub salt in your wounds with Optimus returning as a zombie under the commands of the vile Quessensions to destroy all Autobots! The animation is watered-down especially compared to the 1986 epic film but is the story itself that makes this episode both unforgettable and heartbreaking!
Note: During rebroadcasts of the series, the narrator teases the viewer; " Is this truly the end of Optimus Prime? find out in the Return of Optimus Prime in the next episode of The Transformers "! It’s great to have voice actor Peter Cullen reprise his role as the iconic leader of the Autobots and the same can be said for Chris Latta. ( From the following episode and Honorable Mention: Starscream’s Ghost) 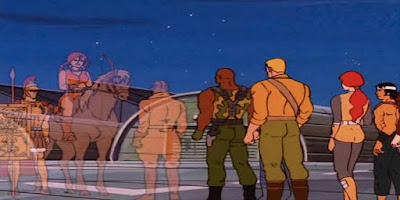 The Phantom Brigade (G.I.Joe  A Real American Hero)
Throughout  the Joes' various  exploits, the special forces team has faced various adversaries and situations, like giant undersea worms, synthetic but humanoids, a genetically enhanced Cobra Emperor and even giant monsters, but none as bizarre as ghosts from the dead!
Written by Sharman DiVono,  Phantom Brigade was another standout episode from the ARAH series! Cobra Commander forces a Gypsy Woman to conjure a spell and resurrect warriors from the past  who cannot die because they are already dead. With an invincible army can the Joe team defeat the Ghost warriors or even survive their attacks?
This was one of the better written episodes despite its way over the top premise. The brigade are not mindless spirits who blindly obey Cobra Commander , on the contrary,  they reflect on their past lives and lost loves in hopes of reuniting with them as that is their purpose for serving Cobra.The most memorable spooky moments,from this episode, was the  young World War 1 pilot's reaction when being told that he died decades ago or how Cobra Commander was  confronted by the spirits in the guise of a skeleton.Not to mention how Roadblock breaks the fourth wall by wondering what it's like to "cross over".
Phantom Brigade’s ending is both bittersweet and sobering as death is inevitable to us all.
Once again, Hasbro and Marvel raised the bar when it comes to American animation. G.I.Joe was this gamechanger with plenty of depth and substance unlike Masters of the Universe.
These were my favorite scary episodes I can recall. Happy Halloween!
Avengers Earth's Mightiest Heroes G.I.Joe Halloween Horror Justice League Opinion scary cartoons Stalkeye Transformers