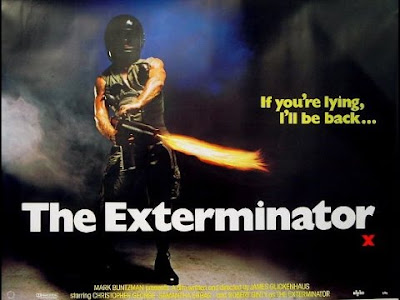 Cult movies, commonly referred to as cult classics, are films that have amassed a sizeable cult following despite being overlooked by the general public. Such films are known for their dedicated, passionate fanbase, which consist of an elaborate subculture that engage in repeated viewings, quoting dialogue, and audience participation. Inclusive definitions allow for major studio productions, especially box office bombs, while exclusive definitions focus more on obscure, transgressive films shunned by the mainstream. Other cult movies have since become well-respected or reassessed as classics. After failing in the cinema, some cult films have become regular fixtures on cable television or profitable sellers on home video. 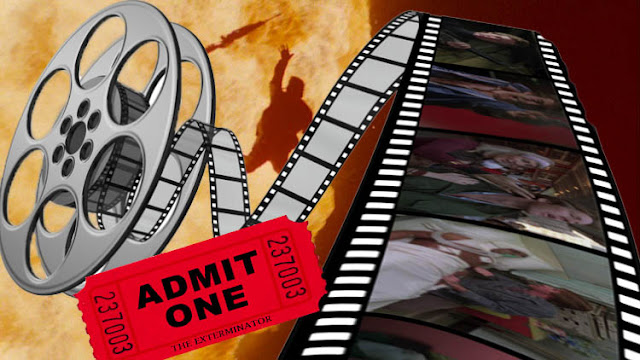 Photo collage courtesy of Stalkeye
So, to celebrate the unsung, forgotten and overlooked films of cinema that are appreciated within a niche demographic of film enthusiasts, I'm going with the Forty-year-old Grindhouse Classic: The Exterminator. The Director’s Cut version.
Tagline: "The Man they pushed too far!"
Although Coffy, Death Wish, Taxi Driver, Gordon's War and Rolling Thunder were among the first vigilante-based films to emerge from the cynicism caused by both the Watergate Scandal as well as rising crime rates in densely populated cities. However, there was another film from that exploitative genre that is one of my favorite hidden gems. It stood out among the others to the extent of pushing the envelope without coming off  too schlock and in turn, garnered praise, nowhere as successful as 1974's Death Wish, but way better than the shitty remake starring Bruce Willis!
It was the Fall of 1980, where Summer vacations was officially over and done with as kids and Teenagers are shuffling off to school. Queen's "Another one bites the Dust" was a huge hit among the Black Urban airwaves, that bestowed newfound fame with the iconic Rock Band. How did they show appreciation for their Black listeners? They play in an apartheid South Africa! But I digress. Anyway, an independent Movie studio company, Avco Pictures had distributed a vigilante film that hearkens back to the good ol days of Grindhouse theaters in the seedy Times Square. 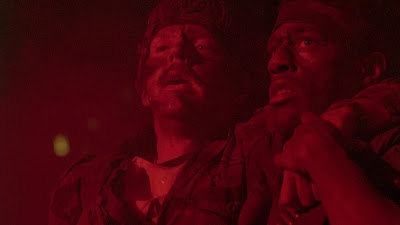 Written and Directed by James Glickenhause (The Soldier, Shakedown)The Exterminator was your above average vigilante B flick featuring Robert Ginty as your protagonist slash antihero John Eastman, a Vietnam veteran who survived the infamous war only to fight a new one: An underground cesspool in NYC. The Exterminator starts off with an ambitious prologue set in Vietnam accompanied with explosions, a graphic beheading and one of the villagers being raped. (Blink and you'll miss it!) Of course, I am referring to the Director's Cut as its the preferred version if you wish to see how fucked up the sadistic underworld and violence can get!
While being captured by the Viet Cong, John's best friend Michael Jefferson, (Steve James of American Ninja) bravely executes an escape move, while soon afterwards, Eastman executes a Vietnamese soldier, the gets a ride home.And a friendship between the two are forever forged.
*Roll opening credits*
While our Heroes return to civilian life and finding employment at a Warehouse district, a bunch a punks called thget this,"Ghetto Ghouls"attempt to steal cases of Beef from Jefferson's loading dock, but is interrupted by Eastman and just when John is about to get his face knife peeled, here comes Mike once again to save the day! 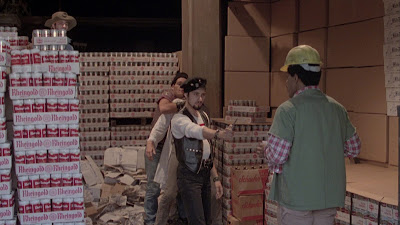 As means of retribution from the failed robbery attempt at Hunts Point within the "Boogie Down Bronx," Mike is ambushed and becomes paralyzed by the vicious gang . Furious at his friend's condition, Eastman utilizes his combat expertise and arsenal from the war to avenge his friend and take down the criminal underworld..... starting with the Ghouls!
Director James Glickenhaus pulled no punches when detailing the brutal underworld of New York City and how Eastman dishes out well deserved “punishment”as this film, fills in most checkboxes that make it an entertaining bloody affair! 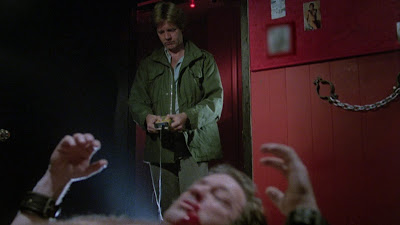 The films storyline adds a bit of Cat and Mouse intrigue when Eastman's exploits catches the attention of both NYC Police Sergeant Dalton (Christopher George)who uses a bit of sleuth work to track down the Exterminator, while the CIA, deduce that the vigilante is part of an elaborate political stunt from outsiders by tarnishing the image of elected officials- questioning their lackadaisical response on crime within NYC. This was more than evident when a local ABC Eyewitness anchor read Eastman's manifesto after making Ground beef out of Crime boss Gino Pontivini. Speaking of “beef” that scene where Dalton chars a Hot Dog with two forks, and wires attached to a lamp as a power source was clever, “Don’t try this at home”!! 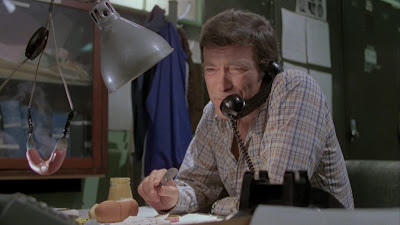 Overall, The Exterminator gives the viewer, a brutal tour guide of the Big Apple during the late 70's and early 80's.  This cult classic is a tour de force, thanks to Ginty's portrayal of a grizzled veteran everyday man, who is loyal to his best friend, compassionate to victims but has a sadistic edge when "exterminating" criminals. Glick's use of cinematography draws you into a hellish New York, just when you feel the beauty and calm serenity of a night concert in Central Park courtesy of Jazz legend Stan Getz, there’s that trade off where and elderly woman gets mugged and kicked in the gut by the Ghetto Ghouls. Eastman's’world does not give the viewer a chance to take a respite with everything going on due to urban decay! 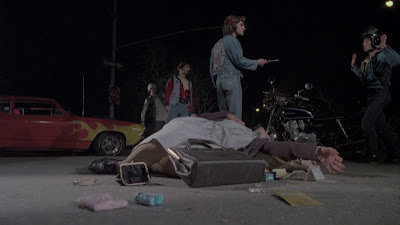 What I found amusing is how Glickenhaus managed to do research on NYC crime statistics when making this film. Not only did he show the uninitiated a glimpse of  depravity from that era in New York City, but added some surrealism to this film;the aforementioned Central Park concert, the local ABC News coverage by real life News anchor Roger Grimsby and Judy Licht. How did Glick manage to convince them into appearing in a low budgeted "exploitative" movie?? The footage in Times Square, wasn't made up, it was that seedy during the 80’s and prior to that, the 70's! But thanks to the Giuliani administration, it’s a much safer environment, albeit this  Tourist attraction. 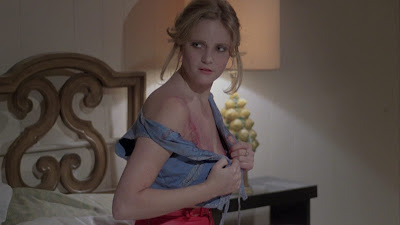 For what may be looked upon as your typical exploitative revenge thriller, The Exterminator was an extremely ambitious effort for a grade B flick. This movie is one of the very first headliners from Avco's catalog of Films, that ushered a bunch of high-quality movies from the studio, from Scanners, The Howling to eventually John Carpenter’s Escape from New York. It has been said how actor Kurt Russell based his iconic character Snake Plissken, of Escape from New York (1981) from John "The Exterminator" Eastland. 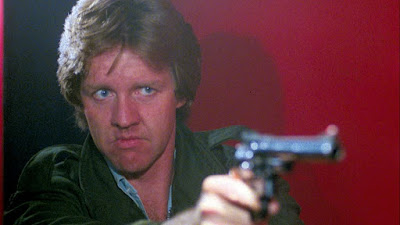 Despite some grainy resolution from the Blu Ray transfer, I cannot stress how the (recommended) Director's Cut, slightly improves upon its theatrical counterpart. It is the only way to get the full impact of this narrative, as Eastman takes his vendetta above limits where even Paul Kersey, would not go there! Another guy named "Stan" as in Stan Winston, (Terminator, Aliens, Iron Man) lends his SFX street cred, when handling the pyrotechnics.The film's climax, felt a bit rushed yet effective thanks in part to Ellis Island as the backdrop with the ending credits and Chip Taylor's "Theme for an American Her". "American Hero"? Imagine if Eastman enlisted for the G.I.Joe Team..oh, wait!
Footnotes:
although not as memorable as the quote from The Terminator, it was Ginty's character that had the first (“If you're lying,) I'll be back.” one liner as well as having possibly the first title with "ator" (e.g.; eliminator, annihilator, Predator and of course, Terminator.) I admire the fact that Glickenhause didn't go for the stereotypical black thugs as seen in movies like Fighting Back whereas in this movie, there are a variety of criminals and corrupt individuals including those at the very top i.e. Central Intelligence Agency. 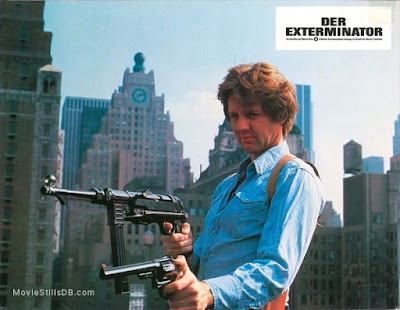 Sadly, September marks the month of Ginty's passing. What is also unfortunate,e is that his career did not take off following the moderate success of Exterminator.  Maybe Its partially due to his involvement in the horrible sequel from Cannon Films’ Exterminator 2?  That said, Ginty will be most remembered for his breakout role as the first Antihero of 80’s cinema and one of my favorite cult films that graced the silver screen! Thanks for reading and “I’ll be back”. 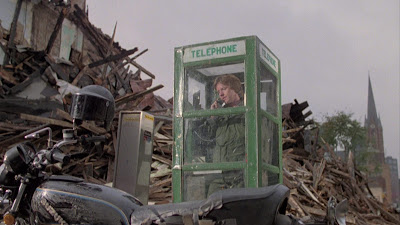 "Need your unfriendly neighborhood sanitized? Call in an Exterminator to clean up your block"!
Cult Films