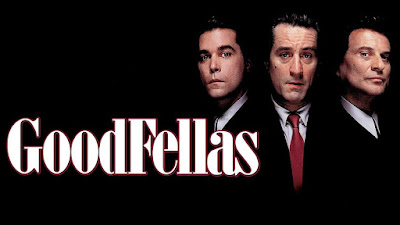 There is something that must be said about 1990. Sure, its known for being the last decade of the 20th century but also, new beginning for cinema. Like for example this hybrid "Coming of Age" Crime Drama which to me, is the best Gangster film ever! I can recall how and why I preferred it over The Godfather during a debate at the now defunct Supernaughts site.

"Anything I wanted was a phone call away. Free cars. The keys to a dozen hideout flats all over the city. Didn't matter. It didn't mean anything. When I was broke, I'd go out and rob some more. We ran everything. We paid off cops. We paid off lawyers. We paid off judges. Everybody had their hands out. Everything was for the taking. And now it's all over".

Directed by Martin Scorsese and released on September 19, 1990, Goodfellas was an adapted screenplay based on Nicholas Pellegi's book "Wiseguy", that chronicles the real life exploits of Henry Hill, a Mob associate who  turned to criminal activities since the age of fourteen give or take. 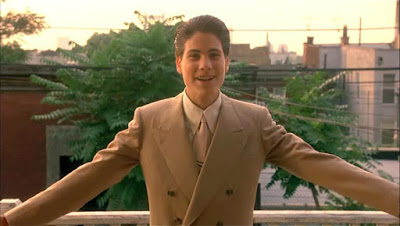 As Henry grows up into a full-fledged adult played by this newcomer, Ray Liotta, you know, the Chantix commercial guy? Hill, under the "tutelage" and friendship of Paulie" Cicero , Jimmy Conway who was infamous for hijacking cigarette trucks and of course, Tommy  Devito played over the top by Joe Pesci (Lethal Weapon 2)

Throughout the film, Hill has witnessed all kinds of shit, whether it’s a Made Man getting beaten and stabbed to death, a Bartender being shot in the foot and the next day, killed by the same gun , unexpected  mob hits and that's just from Tommy!The scenarios and situations are so farfetched, I at times wondered if they were fabricated or exaggerated from the source material for dramatic effect. I have not read Wiseguy, but if all this went down, daaaayuuum! 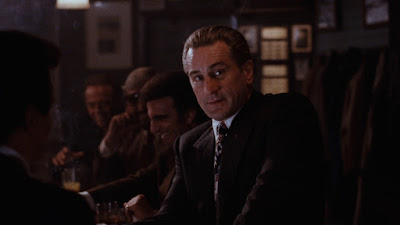 What I loved about Goodfellas, was this balance of comedic timing in what was supposed to be a serious storyline.  I can think of many schemes that had me laughing hysterically, like Jimmy being short changed threatening Wig salesman Morty with phone cord wrapped around his neck as his wig falls off, or Tommy mocking Henry for being chided by his rather, archetypal Mother in Law. It's quirky moments that gives 'fellas the edge over beloved classics like The Godfather pt. 1 and 2. I know most of you would deem it as "blasphemous", but that's just my opinion, man.
The film's pacing never lets up and I can't recall a dull moment during the 140 minutes there is so much to take in when Scorsese crammed plenty of great material like my first introduction to a "tracking scene" that last for well over five minutes!
The soundtrack itself, was fitting for Henry's personal journey.  The songs compliment practically every experience both good and unbelievably bad which he endures. The crescendo is the instrumental cut of Eric Clapton's Leyla, played during the discovery of the bodies from Cicero's organization out of concern of being punched from the Lufthansa heist. Hill further descends into his bad drug habit, which makes him less than expendable as evident when Jimmy plans to have him "whacked".
The underlying narrative of Goodfellas, is cautionary not because of some "Crime doesn't pay" mantra, but how your best friends or people that you saw as family, who showed up at family functions only to end your life without you having the slightest inkling of being betrayed until it’s too late. (And just when you thought that all the backstabbing during The Supernaughts were bad! Jus sayin.😉) Those moments where we see how the supporting cast, gets whacked were chilling as fuck! I mean, not even Carbone  was spared! Pesci stood out among the others for his performance as  the sociopathic  Tommy Devito who had the funniest and not so funniest deliveries depending on your sense of humor.Ans speaking of whom, who saw his end coming? Sure as hell wasn't me!
Yeah, it was long overdue for all the shit that Tommy has done, but back then, I figured it would be this suspenseful buildup, instead Marty just sprang it on us without any warning or hints and it paid off in a big way! The rest of the story consists of Hill's Cocaine fueled addiction while selling firearms. Liotta's narration feels like as if he's this storyteller reading aloud the pages from a novel in front of a gathering crowd.His performance alone, is worthy of praise. While Tommy was a loose cannon and Jimmy being a cunning, ruthless opportunist, it was Henry who was the heart of the trio. He tried to intervene in Morrie's assassination attempt, never committed any violent acts outside of Karen being harassed by her douchebag neighbor  and never lost his cool..even after a jealous Karen aimed a  snub nose at his face.But eventually, all his association with the Mob, caught up with him in a big way as seen during the final 20 minutes is where everything comes together, by falling apart. Henry just rats out everyone with Liotta's amazing wall breaking while testifying against Pauly and Jimmy.
With all due and well deserved credit, Goodfellas did not intentionally romanticize the Gangster life. In fact, it was more like a bait and switch approach, where all seems great at the beginning with Henry  and  Karen being showered with Money, clothes, drugs and other luxurious items, only for all of it to go down in flames! (Figuratively speaking.) The first song played during the film's intro may be "Rags to Riches" however, in Hill's case, its a rags to riches and back to rags tale. 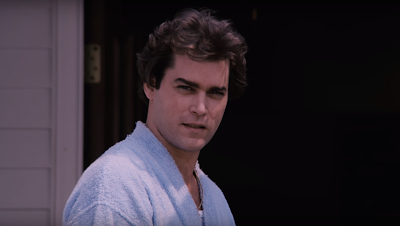 At 30 Years, Goodfellas'  is an undisputed masterpiece, that was unceremoniously robbed at the Oscars, like Star Wars lost to Annie Hall back in 1978. But it's lasting appeal and legacy, paved the way for Mob Dramas like HBO Sopranos which elevated the careers of Loraine Braco, and Michael Imperiolli who of course, starred in Goodfellas, of course. Even an then unknown Samuel L. Jackson made his way in the film. Goodfellas was another 1990 benchmark that has made its mark in Cinema history thanks to Scorsese’s direction, an impeccable cast, spearhead by the talents of Ray Liotta, Loraine Bracco, Joe Pesci and of course, Robert DeNiro followed by a defining soundtrack.
Happy 30th! Do you have any favorite scenes from this seminal classic or "what the fuck you think is funny"?
Goodfellas