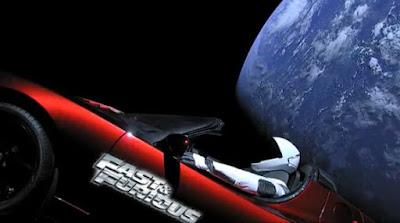 How far can a popular film franchise go? In space, aw, hell no!
I cannot say whether the producers are creatively bankrupt or just reaching for the stars!! (Literally)
While appearing as a guest on SiriusXM’s The Jess Cagle Show, Rapper turned actor, Ludacris alluded that a portion of the highly anticipated F9 will take place in space. There was this long-standing rumor about the franchise going to space, as with Rambo fighting aliens.
Previously, series screenwriter Chris Morgan was asked about a space adventure as possibility. His response was,

"I will say — what’s the best way to answer this? — you’ll have to wait and see. Listen, as long as the stakes were set up correctly, then I’m down for whatever."

Universal's F9 was originally scheduled for release on May 22, but unfortunately for its fans, like my bro, Bop. the Universal produced film is pushed until April 2, 2021, due to the you guessed it, the coronavirus pandemic!
Source: THR's Heat Vision
Fast & Furious Pop Topix