This is Dystopia!!! Revolt! Strange Days and Blade Runner Blackout 2022 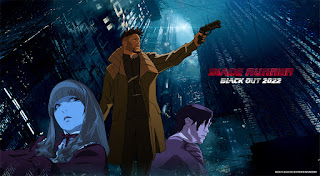 In the World that's coming, uneasy racial tensions between marginalized groups and Authority has reached it's boiling point where the oppressed have had enough! It's time to send a message to "the Man"!
Welcome to another segment of This-is-Dystopia, where in the "World that's coming", is here now!!
Strange Days @ 25 (25th Anniversary)

In this 1995 Cyberpunk conspiracy thriller, written by James Cameron and directed by his ex-wife Kathryn Bigelow, Strange Days is a semi futuristic neo noir thriller that delves into topics like racism, abuse of power, sadism and voyeurism that doesn't come off neither preachy nor pretentious, as the scenarios are blatantly in your face. The year is 1999, and while we are on the brink of a new millennium, there is tension and unrest within Los Angeles as the economy is tanked and the militarized police are out in droves to keep the city in order. 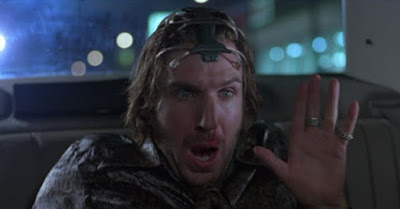 Lenny an ex-cop, is now a dealer proliferating a black-market device-SQUID, a cerebral gadget that enables its user to experience memories from others and record it on a MiniDisc otherwise referred to as Data Discs. After Iris, a prostitute is raped and murdered, Lenny gains possession of a recovered data disc that unravels a web of conspiracy involving the truth behind the killings of Iris and Black activist Jeriko One.Despite the slow pacing, choppy editing and shoehorning Alternative band acts, like some cross promotion Strange Days has a few good ideas that make up for its flaws.

Fienes portrayal of Lenny is not your basic one dimensional action hero, instead he comes off as this energetic  persona when pitching his mind discs, but underneath the layers, Lenny is both obsessive and broken because he refuses to move on from his ex-Lover, Faith.(Juliette Lewis)

Angela Bassett as Mace has her shining moments when displaying moments of badassery when not being Lenny's voice of reason. I enjoyed the all-too brief flashback scene of Mace’s first encounter with Lenny during his stint as a Police Officer. This clarifies the strong bond between the two especially how it unfolds during the final act where Mace is brutally beaten by the Police ala King, which in turn, sparked a revolt against the Cops. I thought Vincent D’Onofrio’s Steckler was a bit one note even his final scene came off as a recycled bit from the first Lethal Weapon movie. As for the narrative, the conspiracy trial will have you invested throughout its 130 minutes or so! 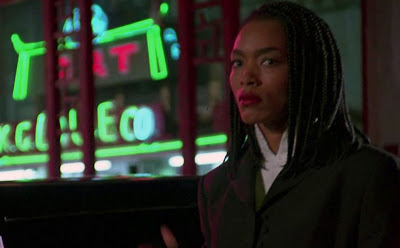 Based on the viewer's perception, the plot’s unveiling may be predictable, yet still an engaging.
Aside from an impressive cinematographic prologue that involves a "one take" robbery scene shot in first person perspective, this often forgotten Dystopian flick, is very topical in today's world since the murder of George Floyd, a Black man was caused by a group of Minneapolis Police officers,  leading to Black and Anarchist forming protests en masse!

Yes, Strange Days was loosely inspired by the Rodney King beating and LA Riots that spawned from the acquittal of the Five White officers, responsible for the beating however, Police corruption and hostility toward Black people is still going on, worse than the King beating.
Also, of note, the events of this film, like Jeriko One's murder coincides with plausible theories, as in who really killed Rapper turned activist, Nipsey Hustle, who like Jeriko, spoke out against Police Brutality.

As with the data disc McGuffin, there are many who are using virtual reality devices as a means of having "experiences" while being self-isolated due to the Coronavirus pandemic.
Strange Days’ foreshadowing is unprecedented and is deserving of a watch. Recommend even if one's millage may vary. Note: It's funny to see actor Tom Sizemore sporting long hair. Obviously, a wig.
Blade Runner: Blackout 2022
Directed by Shinichiro Watanabe, (Cowboy Bebop) Black Out 2022 is 15 minute anime short precursor to Blade Runner 2049's timeline, where the bio engineered replicants are scapegoated for playing their part in a massive scale electrical failure, causing shutdowns in major west coast cities within the United States. 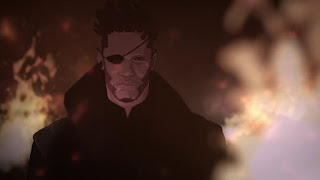 Taking place three years after the events from the first Blade Runner film, the story mentions how the Tyrell Corporation has phased out the original Nexus line of replicants in favor of its  more advanced successor,  Nexus 8 who are created to have the same lifespan equivalent to Humans.
This did not go unnoticed as massive witch hunts fueled by the Human Supremacy Movement have fanned the flames of Anti-Replicant sentiment to the extent of tracking and killing replicants, regardless of those that possess no threat toward the human populace. 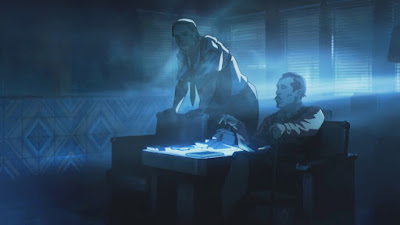 Iggy, who serves as the main protagonist, was a replicant Soldier now turned deserter, is part of an underground resistance formed by revolutionary replicants as a countermeasure toward the Human Supremacy movement. To prevent replicants from being hunted and killed, Iggy along with Trixie must destroy Tyrell's database! Can Iggy succeed and liberate his brethren from oppression? For an all too short animated project, Blackout does an impeccable job giving us a further glimpse into Blade Runner's world. The opening static narration sets up the story's premise followed by a flash forward introduction. Iggy and Trixie are the ideal successors to Roy Batty and Zora and Pris, respectively and it shows!

Blackout 2022's overall pacing is well timed without any filler moments and there's even a 2-minute backstory involving Iggy's disconnect from the Military, thus giving explanation for his desertion. The rich animation and striking visuals including fluidity motion, left much to be desired as in, I wanted so much more of this! 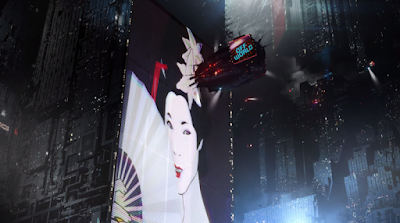 After watching the somewhat abrupt ending, 15 minutes throughout was too short, but again, that does not stop Blackout from being a great film.There's even a few Callbacks and a cameo that Watanabe manage to slip in. Blackout a great supplement to Blade Runner 2049 and worth a rewatch every now and then.The overall themes of fighting against both the system and bigotry fueled by influencers is not new, yet still topical. As of now, many are revolting against "Flawed Enforcement " be it protests or uprisings. Sometimes, to maintain peace, we all must take a stand for equality and the right to coexist without fear of sanctioned oppression. This has been demonstrated in the case of “Blackout Tuesday” where the entertainment industry is finally acknowledging the brutal injustices committed against people of color, particularly Black people in America and abroad.
To correct the ills of Man, a  change must come and now is the time. No Justice, no Peace! 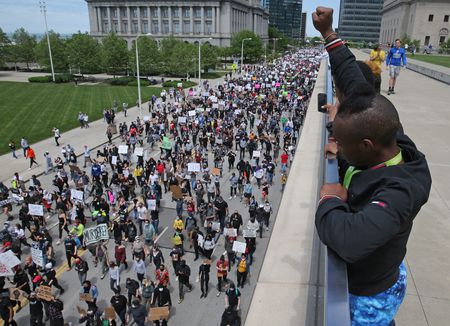