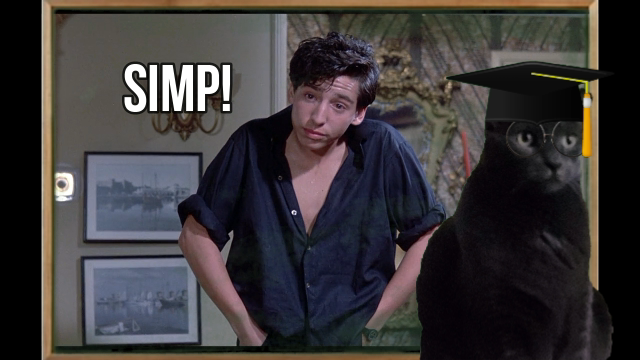 Professor Ollie in the Schoolhouse here, reflecting on his favorite School flicks.
Spoiler Alert! Most of the good ones were from the 80's so Asi me boyo, this bud's not for you!😜
Ah, remember the good ol days when you and your friends would hang around after class, talking shit at the School cafeteria, having a crush on your classmate or even getting into fist fights with bullies? Yeah, like Pepperidge Farms, I remember.
But those days may be long gone, but it's that rite of passage that nearly everyone in America and abroad has to go through.
It seems that school is over now that the lockdown is still in effect! So, while all the kiddies are enjoying their summer break indoors, allow me, the blogger and pop culture enthusiast to look back at a couple of underappreciated School comedies, of a bygone era shall we?
First entry on my list, is this raunchy RomCom for the hopeless romantics out there and the emphasis is heavy on hopeless!
In Cannon's 1983 The Last American Virgin, Directed by Boaz Davidson (Rambo, The Expendables and Boyka) and originally based on an American remake of the Israeli Film series Lemon Popsicle, but with more of that good ol fashioned Sexploitation!,   High School dweeb Gary, our central protagonist, (Played by Lawrence Monoson.)  falls for an attractive Brunette named Karen in some love at first sight fashion. But can he win over her heart without losing his mind in the process? 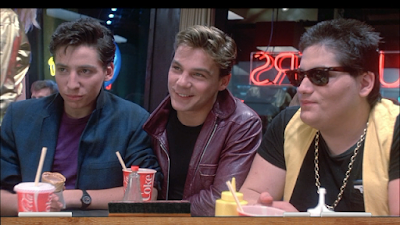 Now Gary here, is more than your typical insecure Teenager who when not being awkward, gives into peer pressure by going along with whatever hysterical shenanigans his friends Rick the playa and fat obnoxious David concocts and there are quite a few. Unfortunately, Gary is both naive selfless to the extent of missing out on good opportunities.

While working as a Pizza delivery guy, Gary meets this Spanish MILF played by Actress and one if Bill Cosby's accusers, the late Louise Mortiz, who makes suggestive advances toward him and how does Gary reciprocate her affections?
This fucking idiot returns with Rick and David to reap the benefits by taking turns on her! Obviously, Gary's stupidity caused him to miss out, thanks to a hysterical, yet very offensive Cockblocking scene. Lawd, there is no way you can film a scene like this, without the virtue signalers getting triggered!!
And as if that wasn’t cringe inducing enough, to further push the raunchiness, there's that dick measuring contest initiated by you guessed it-Gary!I highly doubt you will find your average straight guy examining some dude's Junk. (Unless he's some Urologist or gay!) 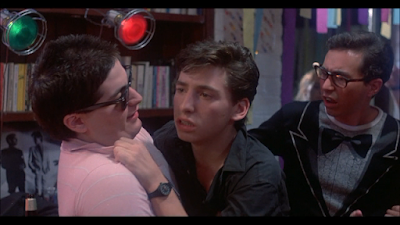 Ah ya gotta love the 80's when a filmmaker would express their art without the need to fear repercussions from the overt PC public i.e. #MeToo.
The Last American Virgin is not only a guilty pleasure, but one of the rare gems within Cannon's filmography.But below the surface of its raunchiness, there’s moments of loss of innocence, infatuation, betrayal, and heartache. In other words, it’s a Soap Opera with shit Teenagers go through! And what is creepier than the lack of rhythm when dancing? Gary's incessant stalking behavior! 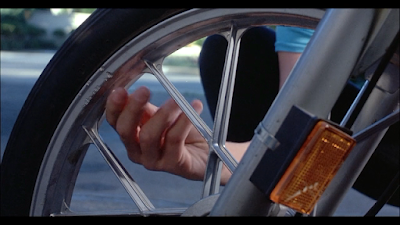 To Monoson's credit, he really channeled the obsessive hopeless romantic archetype as Gary. This simp does the unthinkable for love, like taking out the air from Karen's bike to pawning off his deceased Grandma's stereo and other heirlooms to raise money for Karen's abortion, knowing that he had absolutely no part in it's conception!
I often had the urge to punch some sense into this dweeb throughout the movie. He's starts off confident enough when making attempts to woo Karen, yet takes a backseat with David and Rick getting first picks on a triple date. i e. settled for an unattractive fat chick who was very reluctant to go to 3rd base let along 1st base.
The film's conclusion served as this moral play for all the disillusioned guys out there! The "Bros before hoes" mantra may sound great in theory, but its far from the truth when it comes to Gary's bud Rick, who feels that it's every man for himself!
One of the strongest assets of LAV, would be the soundtrack thanks in part to various artists: U2, The Cars, Oingo Boingo, The Police, Blondie, KC & The Sunshine band , Lionel Ritche and The Fortune Band, a rather obscure rock group who performed Airwaves, a generic song that is fitting for the Soundtrack of Gary's youth during the 80's era.
That said, REO Speedwagon and especially Journey's "Open Arms" were among the sappiest songs which I guess worked whenever "Captain Save-a-Ho" has a weak in the knees moment.
So, what have we learned from The Last American Virgin? Well, plenty of things!
Lessons on how not to be a Simp! 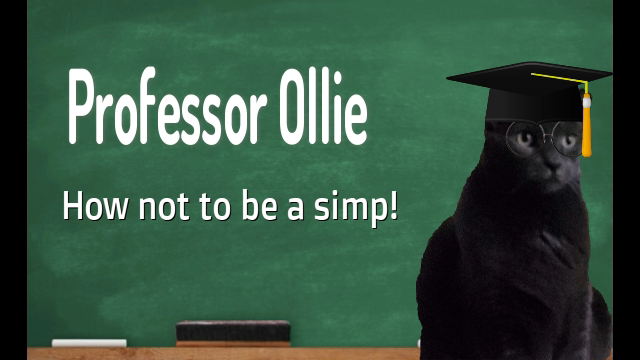 Gary, who I once had a swell of pity for, is practically the villain of this story, his actions comes off self-loathing if not too fucking insecure. Yet brazen, when it comes to being this complete turn-off to Women, not to mention how he was in on bullying Victor, your token nerd. Yup, it is hard to feel empathy for Gary.
This fool rejects the advances of Carmella but instead, have his opportunist "friend" Rick plug her. Now mind you, Rick "stole" the girl of Gary's dreams, so why is this moron bringing him in on the fun?
WWOD?
Since Dave was more of a friend than Rick the Prick, I would give him the honor of “bellyflopping” Carmella if I as Gary is not feeling her. 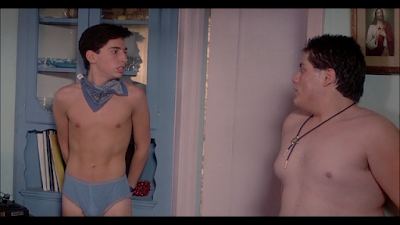 As for Rick, I could have at least blackmailed his ass, cause if you're gonna be a hater, go full hater!
Then there's Rose. Sure, she looks nerdy, but underneath those glasses she’s not hard on the eyes and far from ugly and less superficial than Karen. Rose had a crush on Gary but he wasn't really feelin' it. Now if you ask again, WWOD? If Karen was in love with Rick, well Rose, "come on down"!!! 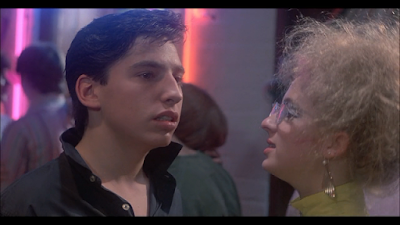 Sure, there's a scene where we see our Zero of a hero, making out with Rose, just that he wasn't consistent enough IMNSHO!
In hindsight, perhaps Gary was this closet queer. I mean, he turns down Women, watches his friend, Rick bang not one, but two Women, wears an ascot and measures Dicks! But all kidding aside, judging by today's standards of political correctness and open acceptance of the LBGTQRSTUV, most would define him as being some latent homosexual. 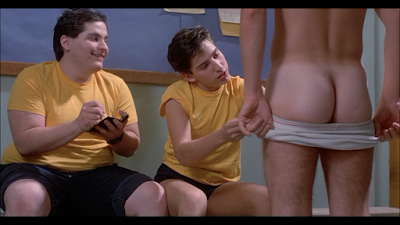 Finally, if there are two takeaways from this movie it would be, you can't always get what you want, even if you try sometimes. While friends can let you down, some Women just aint shit! Think with your (top) head and not your heart!

The Last American Virgin is a fun cautionary tale, with the moral of the story being, "these hoes ain't loyal"! 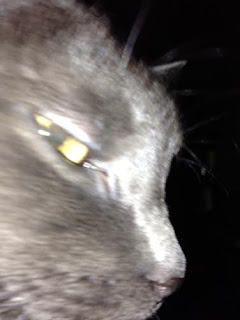