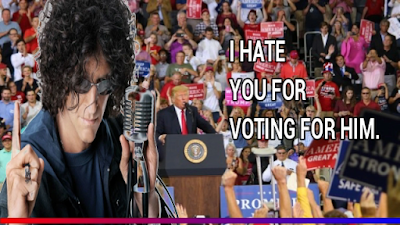 Say it ain't so! Howard pulls a "Darth Vader" on  Emperor Trump! (Return of the Jedi reference.)

Y'know, my friends and I were avid listeners of Howard Stern's radio show since the mid-nineties, when he broadcasted his often lurid and controversial show on KROQ.

While many, including myself, found Mr.Stern to be vulgar, crass and even racist, we couldn't help but subscribe to his daily broadcasts because everyone was wondering,  what out of the wall shit would he say next?

Personally, I found a lot of his commentaries about society, was brutally honest if not off putting.

I can respect that and on top of those traits, the guest interviews and radio skits were entertaining as fuck!

Howard was the first radio personally to speak his mind, regardless of any repercussions which helped to coin the catchphrase, “Shock Jock".

His influence spawned imitators like Don Imus, Rush Limbaugh, Mancow and a few other sub-par plebs.

He may not be the self-proclaimed "King of all Media", but he is the master of his craft.

Now with that preamble out of the way, as of last week, Howard said something that really had his devoted listeners shook!

During a recent airing of an episode from Sirius XM's Howard Stern show, Stern went on one of his usual diatribes but this time, threw shade at those who still support President Donald Trump, and some are listeners of Stern:

"The oddity in all of this is the people Trump despises most, love him the most," said Stern. "The people who are voting for Trump for the most part...He’d be disgusted by them. Go to Mar-a-Lago. See if there’s any people who look like you. I’m talking to you in the audience. The Trump voter who idolizes the guy, he despises you. Despises you! I don’t hate Donald, I hate you for voting for him, for not having intelligence”.

Then he took it further by saying "..don’t listen to my show anymore.."

Well, those of us who are intelligent, knew that Trump was using the “deplorables” to get elected and you know what, it worked! He knew the right words to say and how to stroke the egos of the hostile, ignorant, gullible, or plain stupid. Howard was right!

Of course, Trump's supporters will be quick to respond and who better than Donald's "prodigal" son? Y'know, that belligerent oily looking douchebag, Donald Trump Jr?

"“The reality is this: my dad was able to do what he did when he won this election by being able to relate to those guys,”

Trump Jr. went on to say. “I imagine it’s Stern trying to grab some attention. There’s a lot of other people doing sort of … that took his model — I think he was a real innovator years ago — but took his model and are frankly just doing it much better now, so I think it’s probably just trying to grab headlines.”

Well, the part about taking Stern's persona model i.e. "performance art" is true, but none of the Rush Limbaughs and such are doing it "much better". In fact, they are just preaching to the choir of idiots.

Howard isn't desperate for attention at this point in time, he's at a place where he just wants to kick back after he has made all his money...from his userbase that are pro MAGA.😉

Also, I guess he got tired of the cult mentality from Trump's loyalists and acolytes if not the blatant irresponsibility of the Trump Administration especially during the mishandling of the Coronavirus pandemic.  Let's just say he finally got this epiphany, but too little, too late.

Prior to that Stern suggested that those who take every word from Trump seriously, that they should drink Clorox. That said, there is a modicum of hypocrisy from Stern, who was close friends with Trump, who I am sure he knew was a White Supremacist.

And the same could be said about Spike Lee, who was buddies with Trump even after he published an op ed asking for the Death penalty of the Central Park Five who were falsely accused and sentenced by an overzealous Prosecutor Linda Fair-stein.

Stern, during one of his broadcasts, made light of the CP5 as with many who had rushed to judgement and even did not like how Serial killer and cannibal was murdered in prison via two Black inmates. I can’t say whether or not he lost his fucking mind or was it just for shock value. I wouldn't put it past him for being racist as well. But I digress.

So yeah, Stern along with a few others who hung out with Trump, are frauds. However, Stern may have changed his outlook after the last I listened to his show circa 2006.

Some including the Missus, would say that it was due to his marriage to Beth.

Even should his show and celebrity reap a severe backlash, Howard could care less at this point. He can retire like Bruce Wayne in The Dark Knight Rises. 😆

After witnessing how the pro Trump demonstrators were sporting Swastikas and Nooses, not even wearing masks when protesting Governor Gretchen Whitmer's Stay at Home mandates and even making death threats, I can only hope those cowards, choke and die from the "C Virus".

I'm no bleeding heart, but if there's one thing I despise, is oppressors and those who encourage oppression be they from the extreme left or alt-right.

That explains why I have lost some friends online and off. But better that, then to compromise my courage of convictions.  You either stand up for something or fall down for anything, I presume.😎