Quarantined Cinema: Bloodshot Review (Basically, A Man Apart, but with the sum of many parts.) 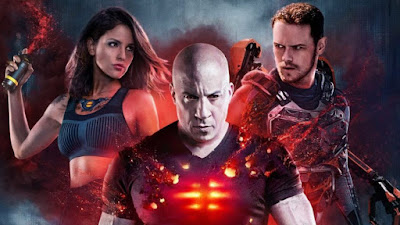 In honor of Easter, or as some would call it-Happy Zombie Jesus Day, here's my brutally honest review of  Bloodshot, not only is he a resurrected hero, but yet another "Straight to Video" movie caused by the Covid 19 pandemic.
So, despite dire warnings from Jim83 along with unabashed skepticism, I finally gave into my morbid curiosity and decided to take the plunge by renting the recently theatrical to home release-Bloodshot.

Warning: They be (minor) spoilers, matey!

Based on the independent comicbook publisher Valiant and Directed by Dave Wilson, Bloodshot is centered around the titular character Ray Garrison a former Marine, who like Jesus Christ, is resurrected from the dead but now, with superhuman abilities. "Sound familiar"?!?

Is Bloodshot worthy of "killing time" let alone the $19, even if you're hosting a viewing party with each contributing at least five dollars? Let's find out! 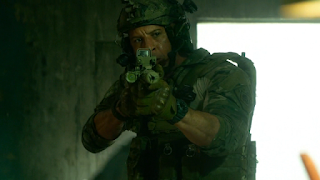 During the prologue, there's Ray and his squad perform a rescue mission filmed in some Call of Duty  style that concludes with some corny jingoistic "no sacrifice is too great" motivational speech. Soon afterwards, Ray embraces his wife Gina that looks like a generic scene from the Lifetime channel.

Annnd as any brave soldier who risk his life while carrying out heroic deeds, Ray-ray gets a lil “downtime” with the missus in Italy. Unfortunately, he gets ambushed then drugged, only to wake up tied to a chair, while some “Union Jackass” called Martin Axe makes his entrance via dancing to Talking Head's Psycho Killer. (A fucking waste of a good song!) And in keeping up with the tradition of this genre, offs Ray. 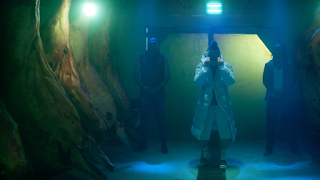 Fast forward and we find Ray reawakened in a special facility that provides wounded soldiers with "cybernetic enhancements"-Rising Spirit. Guy Pierce reprising his role as "Aldrich Killian" by playing the founder of Rising Spirit Dr. Emil Harting, that’s right another Mad scientist!
Harting informs Ray that he's the first successful candidate for his new nanotechnology. With Ray bearing no memory of his past life, until now with the first business at hand as he regains his memory, you guessed it..revenge!! Sony's latest Intellectual Property grab is  as disappointing as its previous licensed films well, for the most part anyways.

We've all seen this before, and it doesn't take some analyst to know how Bloodshot shamelessly cribs off ideas from more notable concepts i.e. Robocop, Universal Soldier and Marvel's Deathlok for starters. There were unintentional hilarious moments where we see a training montage with Ray lifting weights as if he's in a fucking infomercial or former Navy Diver "KT" (Eiza González) as in Katie performs "auqabatics " within the Rising Spirit's complex as if she's advertising chlorine of perfume.

And speaking of which, I enjoyed the cinematography albeit, subtle during the pool scene. Something about a bluish backdrop gives off a comfortable aesthetic if not some distinct comicbook panel vibe.
However,  if blue aint your thang, there's always the ol Zac Snyder “slo mo” effect saturated in red whenever Bloodshot is having a "Superhero moment”. 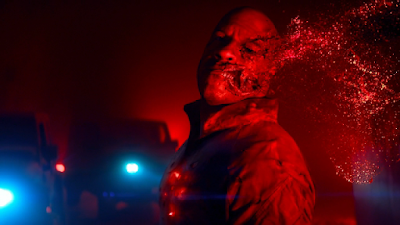 Despite having a few memorable scenes, Bloodshot for the most part, fails to deliver. whether it’s the disappointing execution or a lazy narrative.
But as I have mentioned earlier, we're talking about Sony Pictures here, who has a track record of mishandling Intellectual Properties. For example...

Bloodshot for all its intense and purpose, is not an overall failure, there are a few funny scenes involving Eric, an employee of Rising Spirit who I guess is the Rob Schinder of this movie (1995 Judge Dredd reference.) Eric comes off as an avatar of Nerd culture and can be just as annoying as many nerds! 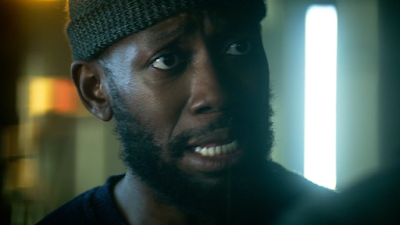 And if one nerd wasn't enough, here we have the eccentric Wilfred Wigans (played brilliantly by Lamorne Morris British accent and all!) who uses his coding expertise to help Ray get on his merry way to putting an end to Rising Spirit.Morris was so convincing as a brit, that I assumed he was from the United Kingdom, when in fact he was born in Illinois. Talk about "row reversal"! 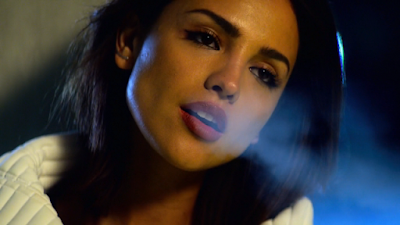 Eiza González is another standout even when her role as KT bears that certain cliché as an employee of Harding who becomes this conscientious objector if not some potential love interest. I can see a spinoff featuring both KT and Wiggins ala Hobbs and Shaw only on one condition; Get a good screenwriter and Director, goddammit!

Pearce’s role shouldn't be that much of a stretch for him. It's unfortunate that he never got to play a major character within the Marvel Cinematic Universe, especially a superhero role, since I always pegged him for the role of X-Men's Cyclops since I first saw him in LA Confidential. Ironically, Pearce was even considered for Daredevil before Ben Affleck landed the part. 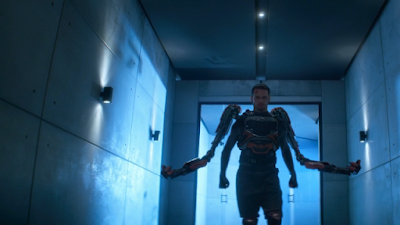 And there's this fight scene against some flunky bearing an exo skeleton gear which is a cross between Doctor Octopus and Call of Duty: Advanced Warfare. I found this penultimate clash palatable as with the implementation of  advanced facial manipulation techniques, in order to further assist the narrative. is one of Bloodshot's few saving graces.

But that's practically as far as it goes. For the record, I don't hate Bloodshot instead, I admire what could have been, if it wasn't so derivative or paint by the numbers, even for a comic adaptation .
I cannot stress how much it borrows bits and pieces of other  movies! Hell, even KT's taking on an armed security unit, reminiscent of Black Widow from Iron Man 2! What the hell!

As for the soundtrack, Steve Jablonsky's score was minimal if not uninspired.With the noted exception of the infamous KT underwater scene, very soothing and there's Eiza. *AHEM*

Final Verdict: Despite its concept, Bloodshot is an also-ran execution of its comic counterpart. It would have been best conceived as a Playstation videogame with the right developers.
Vin Diesel's acting or what substitutes as acting, is eye gouging even when he's chewing up scenery. You can tell how he’s phoning it in for a paycheck since he doesn't come off convincingly enough as a man who lost his memory nor his wife unlike other Comicbook thespians like Keith David from Todd McFarlane’s Spawn or Brandon Lee's Eric Draven. There’s no grieving, survivor’s remorse or whatsoever. And when it comes to plot device, Vin Diesel or "VD" for short, has been down this road before in one of his previous revenge films, called A Man Apart. Where in fact, he was more emotive than this movie. Bloodshot is basically the same canvas, but with a different coat of paint.."Red"! 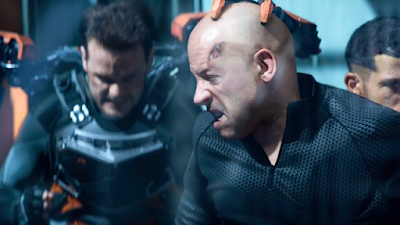 While I cannot recommend purchasing this rental for a steep price, one’s mileage may vary especially since it’s a check your brain at the door Superhero movie. I think it's best to wait for it to arrive on Cable TV, streaming platforms or purchase the Blu Ray with all the special features for the same price of a rental. That's if you're heavily invested in Superhero films, even those devoid of true substance.  Have at it! 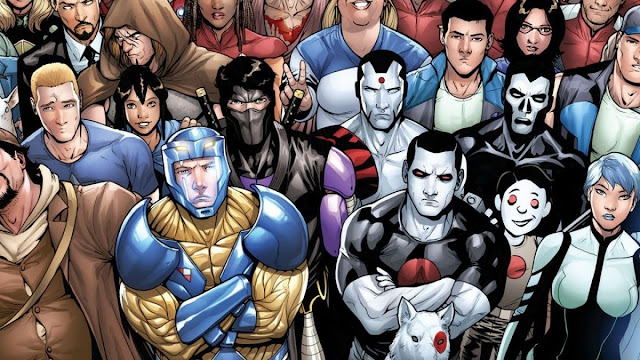 Bloodshot depending on its success, was used as a tentpole for potential future Valiant projects like Shadowman, Ninjak, Eternal Warrior and XO Manowar. Hopefully, Sony will follow through with these underused characters. That’s if they step their game up! Now that Amy Pascal has left the building, therein lies hope.