Ah, November!
To many, December is thought of as that "most wonderful time of the year ", but being the contrarian that I am, that honor goes to the Month of November, since 1991

Where at the time, I was working for Toys R Us as a seasonal employee while making and saving enough money to buy this "hot" but not so new console called, Sega Genesis!

Sega's successor to the Master System, debuted around August of 1989. I didn't get into videogames until a year later. At the time, I wasn't  too familiar with the Genesis nor did I care to invest in one since I already have the NES which had some damn fun titles, including hidden gems like Low G Man, Shatterhand, Isolated Warrior, Power Blade, Snakes Revenge and yes, G.I.Joe! Yeah, I was content...until I saw a bunch of Television spots promoting the hell out of the Genesis, boasting about its 16-bit graphics while highlighting a few games. Also, the jingle, though immature, was catchy as fuck!

Now, i'm sold! After a year of "playing with power", as
in the Nintendo Entertainment System that I received as a birthday present, I thought it was time for an upgrade, as in from 8 to 16 bit graphics and Genesis proved that it does what "Nintendon't" can't. 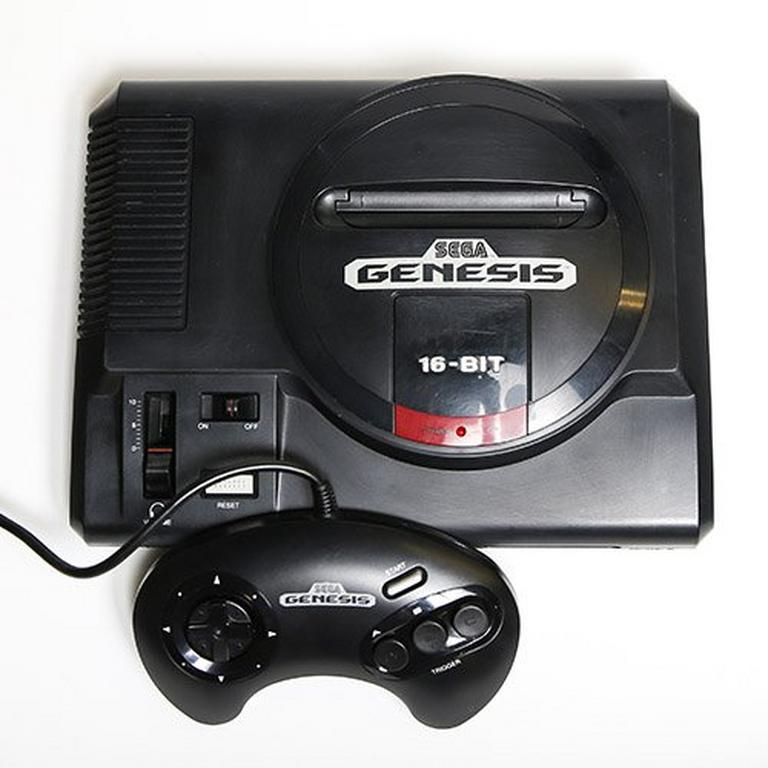 Packaged with some unknown game called "Sonic the Hedgehog" as part of the bundle, the Genesis had an awesome array of used titles that I managed to get my hands on for dirt cheap from a Korean Gaming outlet. Sure the carts were used but with some alcohol and a few Q-tips, they worked as good as new and the day before Thanksgiving, I was up all night playing exclusive titles like Sonic, Forgotten Worlds, Thunderforce 3-an incredible side scrolling shooter with a kickass Techno synth soundtrack, Strider; another amazing game with a memorable score and gameplay and one of my all-time favorites, Dynamite Duke! 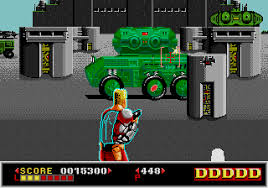 Despite being a very obscure 3rd person title, Dynamite's concept had instantly garnered my interest; A super soldier, enhanced with a bionic arm that can not only throw a mean right hook, but when he's all charged up, Duke can deliver a punch of devastating proportions! This game was like is a hybrid of GIjoe meets Deathlok so it’s obvious why I grabbed this title first. And the minute I got my Genesis, to me, that day felt more like Christmas than Christmas (December 25th) itself!

Usually, I dislike Platformers especially when it involves cutsey characters as the protagonist (Mega Man being the noted exception.) but Sonic the Hedgehog was a more enjoyable experience than the overrated Super Mario Bros series. What makes the titular character so appealing is his no-nonsense attitude especially when it came to his toe tapping animation.

Revenge of Shinobi was a more "realistic" Ninja game than say, Ninja Gaiden because of its gameplay, supply management and basic hero rescues girl premise with shoehorned revenge themes.

Not to mention, a killa soundtrack, and some cameo bosses like you wouldn’t believe! Godzilla, Rambo Terminator, Spider-Man and even "Batman"! I bet the lawyers for most of these characters, weren't too happy seeing them in a game, while not making a profit.

Well, at least Spider-Man was licensed to be in the game. 😁

Sega released another inhouse game at that time, it was a 1-2 player beat em up. Streets of Rage was inspired by Capcom's Final Fight, however it was vastly different and superior to Final Fight. Not only can you switch between three characters, with each having a special ability, but when you’re overwhelmed or outnumbered, there’s a last minute save-a police car shows up firing a mortar cannon at the crowd. What I also liked about SoR, was the diverse game characters, one who is African American (The first I have seen from a videogame that is often crowded with either Japanese or Caucasian protagonists saving the day.)and the other, a Woman.Once again, Sega was ahead of the curve! 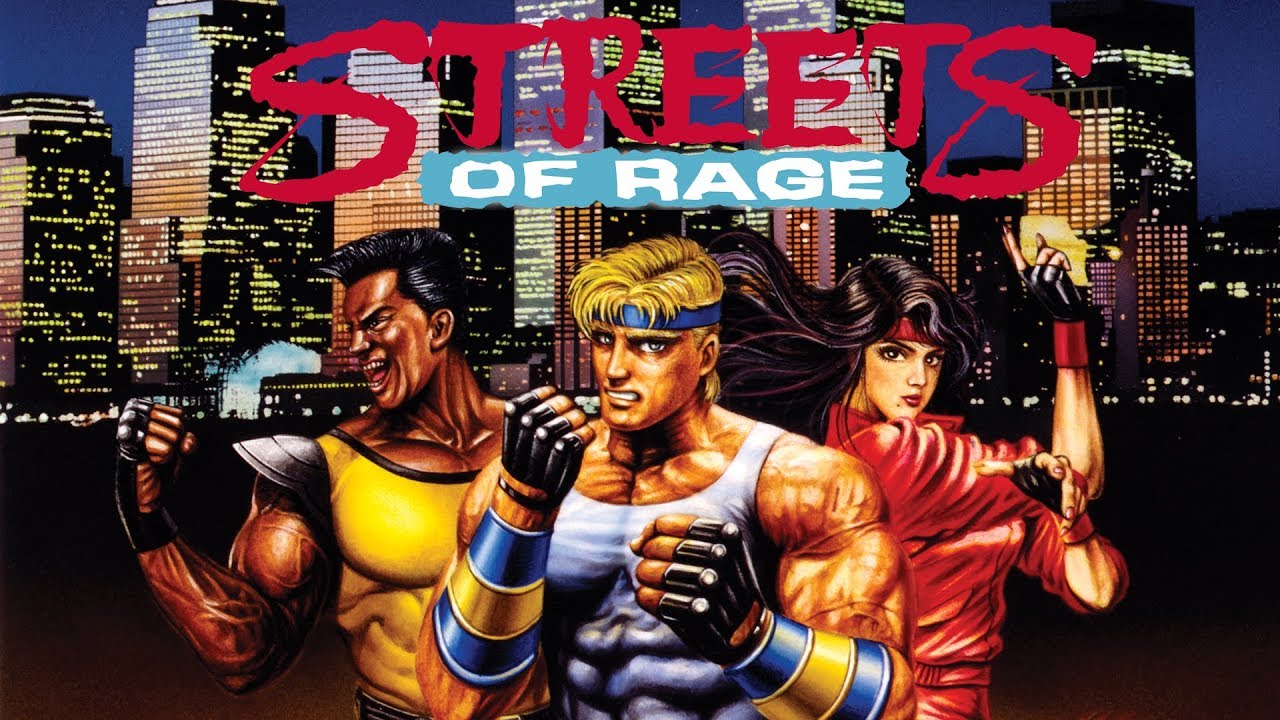 The soundtrack had a funky techno vibe that was compelling but hey, its
from the composer of Revenge of Shinobi, after all. If that wasn't enough, what shocked me and a friend if mine at the time, was when we finally got to the last boss, Mr. X, there was an ingame option to either join or refuse Mr. X.

My "friend" decided to side with X, leaving me to fight him. Needless to say, I lost the round, he won and there was that evil fucked up ending where he or she became the new Crimelord. Ouch!

Now, Strider was the true test of how powerful the Sega Genesis was as the graphics were on a par with the Arcade version. This was another amazing high concept title that had nuance, even if the gameplay was mere hack and slash. The colors were vibrant, and the stereo soundtrack was an experience in itself.

A few years later, several programmers had managed to squeeze as much tricks and special effects from this aging system despite being under-powered in comparison to its main contender, Super Nintendo otherwise known as the SNES. Ranger X, Gunstar Heroes, Shinobi 3, Castlevania Bloodlines and Contra Hard Corps proved that Sega was still running shit!

Even the port of Mortal Kombat outsold the SNES version due to limiting restrictions on mature content, like say, blood and gore.

Also, might I add, that the Genny version of  Robocop Vs Terminator was a much better game than SNES' inferior port both in graphics and gameplay.

I always knew that the Genesis was here to stay, for at least four years, which was when both the Sega Saturn and Sony PlayStation arrived.
Prior to the next gen arrivals, was a case of "too good to be true". From out of nowhere, Sega dropped this add on peripheral called "32 X" which claimed to boost the Genesis to 32 bit graphics.

Well, that wasn't necessarily the case. Sure, you were able to play 3D games like Star Wars, Doom and Virtual Racing, however, the overall library of 32 X titles, were either few and far between or just plain bad.

To further compound the 32 X's lackluster reception, the developers didn't really get to utilize the mini processors of the add on and with the more powerful Sega Saturn appearing upon the horizon, both developers and gamers had abandoned the console.

Since the Sega 32 X arrived in stores during mid November 1994, it seems now more than ever, that November is this ongoing ritual, as it was often associated as the month that I would get my hands on a brand-new gaming console or cool game title.

That’s if money and scarcity weren’t a problem. Gotta put that disclaimer out there. 😅

And with all that out the way, I am very grateful to Sega and its sleek black console for wonderful memories, yes the Genesis came and went, but the games, despite not having powerful graphics  like the PS4, XBox or Nintendo Switch, are still fun to play be it through emulation or the recently launched Sega Genesis Mini!

Thanks, Sega and remember, remember the Month of November!