Ever since I was a kid growing up in the early eighties, the was a certain intellectual property that helped to redefine that decade. No, it wasn't your go-to comicbook Superhero, nor was it some blockbuster movie.

Instead, it was a franchise based on a goddamn toyline! What started as a reboot or resurgence of a beloved action figure of the sixties, became an instant pop culture milestone 20 years later!

G.I.Joe A Real American Hero, not only branched out into comics, but a successful syndicated Television series, which along with the 30 second animated spots, propelled Hasbro's toyline to great heights!

While the impressive array of figures, vehicles and playsets were a hit among Boys and collectors, idea of promoting the brand via comics, was a brilliant marketing strategy!

Sure its been done before with Mattel's Shogun Warriors and of course, Mego's Micronauts, but never to the extent of Hasbro's venerable G.I.Joe series.

It’s quite obvious, how the success of G.I.Joe ARAH, wouldn't have come to fruition had it not been for the creative input of Larry Hama, a Writer and exceptional Artist for Marvel Comics at the time.

Not to mention that Archie Goodwin, also from Marvel, who came up with the nemesis, Cobra Command, that "ruthless terrorist organization determined to rule the world"!

What was part of ARAH's appeal, was the nuanced worldbuilding within the toyline. Not only do you have a diverse set of characters from various backgrounds and ethnicities, but here you have a silent ninja in black, his red haired ladyfriend who specializes in Counter Intelligence  and was the first action figure marketed for boys, a silver faced Arms dealer, some  Master of disguise, but changes color in sunlight.

(Oh, did I mention that on his filecard, Zartan was deemed a "Paranoid Schizophrenic "?) Anyhoo, as that classic slogan goes.."He'll fight for freedom whenever there's trouble, G.I.Joe is there..." or rather, WAS!

I had the good fortune of attending the annual 30th Salute convention held at the Intrepid Air/Space museum around the month of August exactly 25 years ago, where the event, Hosted by Hasbro, honored the 30th anniversary of the G I.Joe brand.

It was fun talking to the collectors and the friendly people at the salesbooth.  For some reason, TV and Magazine reporters chose me out of thousands of Joe enthusiasts to be interviewed.  What was so special about me of why I stood out among the other diehards. 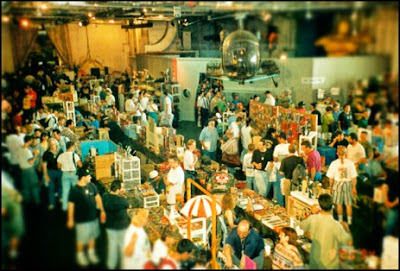 I wasn't cosplaying unless they mistook my Navy Blue Jumper with a light blue shirt bearing the iconic ARAH logo for that sorta thing.😅

The big highlight was meeting and talking to then Vice President Kirk Bozigian, he was very down to earth and acknowledged my praise and complaints of the direction the toyline and comic was going.
If Kirk wasn't signing autographs, he was making a few jokes, one in particular,  Bill Clinton's infamous Crime Bill.Perhaps he knew something way before the rest of us caught on but I digress.
He asked if I wanted to attend the major press conference, closed to most of the public, except for the press junket and, I fucking jumped at the opportunity!

What started off as a inspired video presentation of G.I.Joe's history from the 1964 figures, Adventure Team and even Super Joe, which I really liked but Kirk hated, finished with the most popular of the line, ARAH.

After the clip finished, Bozigian gave a cool speech reminiscing about Joe and his past experiences, while praising the other co contributors.
Then, like an atomic bomb dropped on an unprepared populace, Boz announced that the Real American Hero line has been officially "retired", as in discontinued or in the lexicon of 1982's Blade Runner, killed off! During the fanfare music, all that was heard, was a huge collective of sighs, me included.

Then Kirk makes a following announcement of a new line of G.I.Joe to replace the ARAH line, "Sgt. Savage and the Screaming Eagles"?!? What the fuck? 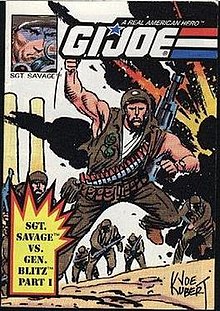 Okay, for those not familiar with Savage, basically, he's a World War 2 Soldier who had the misfortune of being frozen in suspended animation, only to awaken in the modern era. (Sounds familiar??)

The line was crossed promoted with an animated special and I think a mini comic illustrated by the late Joe Kubert, who I also spoke with prior to the big announcement.

After the conference ended, I expressed my disappointment to Kirk, and he responded "that's the nature of the business, Jeff.

Kirk was right in a sense. Hasbro had merged with its main rival company, Kenner. The same guys who put G.I. Joe (Super Joe counts, believe it or not!) out of business until the great resurgence in 1982, is now under or over Hasbro!

This probably led to why ARAH was discontinued in favor of an inferior product like Sgt. Savage, which only lasted for about a year.

Then sometime afterwards, Hasbro attempted to recapture that "lightning in a bottle" with the G.I. Joe Extreme format. Poorly constructed figures who were nothing more than ripoffs of the Real American Hero line.

The animated series couldn't hold a candle to the OG syndicated show; however, it was way better than that shitty 1990 series produced by DIC.

As I walked away from the Intrepid, there were a crowd of anti G.I.Joe protesters waving signs "Hasbro sells war toys to kids" with an illustration from the Marvel comic, courtesy of Mark Bright .

And speaking of the Comic, G.I. Joe A Real American Hero, issue # 155, was the last Joe comic, released by Marvel.

I didn't bother to engage the angry protesters because whether I agree or disagree, it's their god given right. And that's what the Joe's ultimate purpose was; "To protect Human freedom".

Y'see, the premise of G.I.Joe wasn't some jingoistic intellectual property birthed during the patriotism unearthed by the Reagan era, but instead, as with Star Wars, it was a nuanced take on good vs evil. 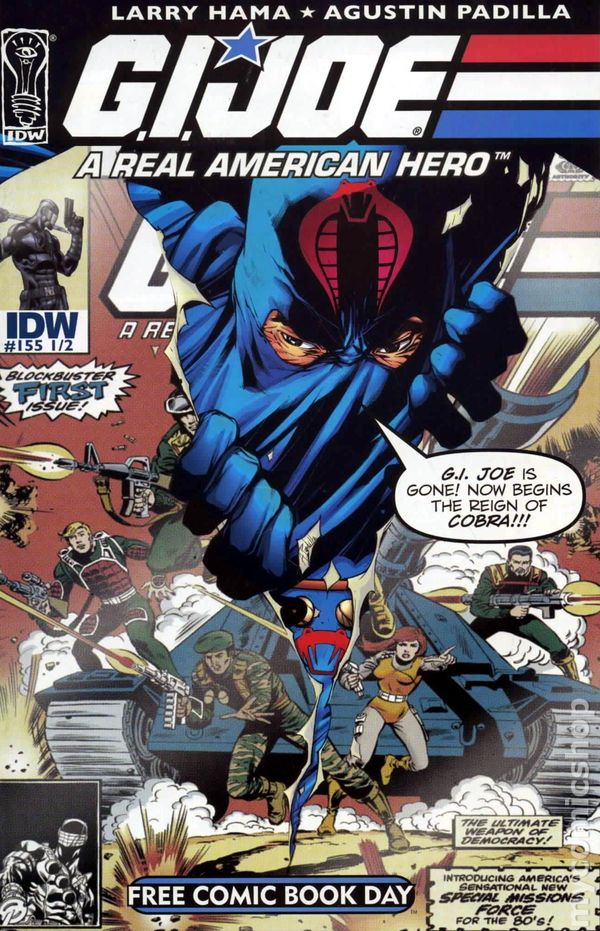 Despite the discontinuation of the toyline , it was the Intellectual Property itself,  that lived on thanks to Comics, Animated specials and two live action Movies, with more coming down the pipeline,  courtesy of Hasbro's partnership with Paramount pictures.

G.I. Joe without a doubt is still, there!

Special thanks to all the amazing contributors of Joe's legacy  throughout I have had the honor of knowing.
.
Kirk Bozigian