Up until news of this new Superhero series arriving on Amazon Video, I had no fucking clue what "The Boys" was all about! Okay, scratch that!

I once read a synopsis about some comic, Written by Garth Ennis (Preacher and Punisher) about  vigilantes, determined to take down other Superheroes or rather, in particular, "Supes" who despite their celebrity status and fame, misuse their "gifts" be it corporate sponsorship, war privatization, monetary gains or just plain murder! It's all coming back to me now.

In this pilot episode titled "The Name of the Game", it starts off with a bank robbery getaway, that's thwarted by a "Amazonian Warrior" and some guy called "Homelander", who has heat vision and sports an American flag as a cape. (Y'see, we're already in on the joke!) This mysterious Superteam is sponsored by Vought International, a corporation that utilizes superpowered individuals for "good" as in good ol capitalism, be it films, TV shows theme parks or tie in merchandising. Again, we know what we're into concerning it's blatant satire! 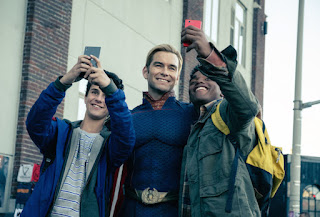 Elsewhere, a Electronics store salesma Hughie (Jack Quaid) is feeling optimistic when he and his girlfriend,  Robin, make sudden plans for the future and just when things seem all sunny and bright, a unexpected tragedy occurs, which was due to one of Seven's  mishaps or reckless abandon. 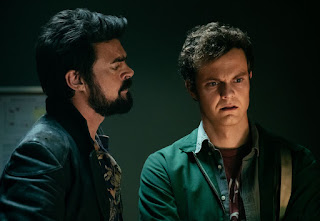 A grief stricken Hughie is coerced by Vought into signing a NDA that would clear one of the Seven of any wrongdoings. With the death of his Girlfriend still on his mind,Hughie tries to go on with his life until out of nowhere, he's approached by Billy Butcher (Karl Urban) who offers him a chance to make things "right" as it seems that the "The Lucky Seven" is now being put on notice!

In the meantime, Annie, who aspires to become this Superheroine role model ,  auditions as Starlight to be part of The Seven and the good news, is that she made the cut! The bad, well..lets just say how Annie's disillusionment catches up to her in the way of Female empowerment, gone south, "deep" south!

Meanwhile, Hughie agrees to sign the waiver, but under one condition,  an apology from one of the Seven and this is where shit gets real, as in really serious!

I wont spoil the entire pilot, but so far i'm a bit enthusiastic about this  new series from Amazon, and despite the fact that this is yet another one of those Superhero shows, The Boys sets itself from the rest of the current offerings of late. 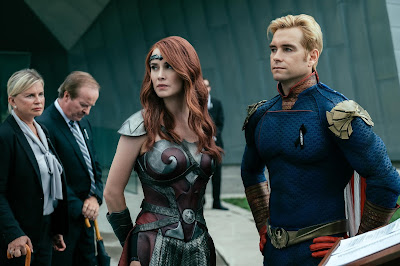 The dark humor is well placed, the cynical subtext of blind hero worship and corruption serves as the axis of the narrative and there are clever self referential moments that most Comic readers and geeks will notice right away.  Yes, it's  satirical, but at the same time, it won't deviate from the dramatic content, which is essential to the storyline as themes of moral corruption, sexual assault and the deconstruction of beloved Superheroes, are often buoyed.

But at the same time, it humanizes certain Pop cults of personality, as they are flawed and are in need of acceptance like most most people.(See Homelander's scene, well portrayed  by Anthony Starr in episode 2.)The Boys, for what it is, is a refreshing break for those who may be suffering from Superhero fatigue, thanks to it's unapologetic and  humorous deconstruction of "Superheroes".